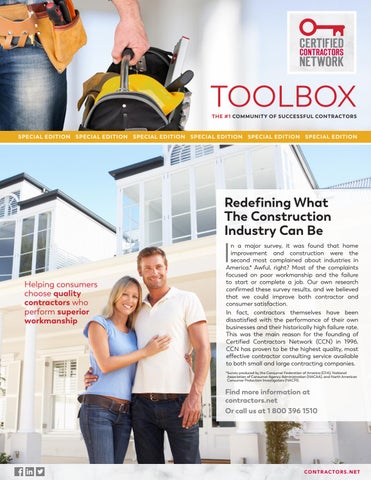 THE #1 COMMUNITY OF SUCCESSFUL CONTRACTORS

Redefining What The Construction Industry Can Be

n a major survey, it was found that home improvement and construction were the second most complained about industries in America.* Awful, right? Most of the complaints focused on poor workmanship and the failure to start or complete a job. Our own research confirmed these survey results, and we believed that we could improve both contractor and consumer satisfaction. In fact, contractors themselves have been dissatisfied with the performance of their own businesses and their historically high failure rate. This was the main reason for the founding of Certified Contractors Network (CCN) in 1996. CCN has proven to be the highest quality, most effective contractor consulting service available to both small and large contracting companies.

The results speak for themselves—being a member of and receiving training from CCN is beneficial to both the consumer and the contractor. Non-CCN contractors had lower ratings on a year to year basis, while the CCN contractors saw their ratings greatly improve.

Our Mission CCN’s mission is to enhance the professionalism, performance and perception of the construction industry. We promote ethics, education, leadership and innovation, so that the construction industry and community mutually benefit. All members are held to a Code of Ethics and strive to deliver 100% client satisfaction. Our mission is to also make our members more successful and profitable, while helping them provide better, more professional services and products to their customers. These goals are achieved by providing training, guidance, motivation and support. We also promote networking between our members and arrange for group purchase discounts, when possible. We believe that by providing advanced training and consulting, we can teach our members to educate consumers on how to make a successful construction investment. It is our belief that, if properly educated, most consumers will make better decisions when choosing a contractor and therefore enjoy greater satisfaction with their projects. A study of satisfied and dissatisfied customers was recently completed by management experts at UPenn’s Wharton School of Business. The results confirmed something that we have told our members for years: bad news travels faster and further than good news.

Here’s why An average consumer who has had a problem or is dissatisfied with a particular product or service tells an average of nine other people about this experience. It has also been found that when these stories are retold, they are embellished to seem more severe than they originally were. Satisfied customers are much less likely to tell people about their experience. The average satisfied customer will only share his or her experience with five people. Satisfied customers fear being responsible if something goes wrong on a friend&#39;s project, which 2

may be the reason why they stay silent even when they have had a positive experience. Surveys have been completed several times over the last 20 years by Qualified Remodeler magazine with consumers who had remodeling projects completed on their homes. CCN and its member companies have also surveyed customers though a strategic partner, GuildQuality. Although we cannot guarantee that the studies are entirely scientific, we do know that Qualified Remodeler claims to have surveyed almost 1,000 consumers of remodeling projects through their partner, RenovationExperts.com. We have surveyed, through GuildQuality, over 1,700 CCN member companies&#39; customers. We feel that this is a valid sampling and has resulted in important information for all remodeling companies to read and judge. What makes surveys so important is most consumers will not provide feedback unless the contractor asks for it. Even then, according to GuildQuality, only 70% of the people will respond. It&#39;s no wonder most contractors don&#39;t really know what their customers think. Small business owners need to get feedback if they are to achieve customer satisfaction, which should be their number one priority as a contractor. Experts found that only four percent of all customers with problems complain to the company. The rest do business with someone else or tell their friends, family and neighbors about the company that gave them problems. As the cost of acquiring new customers is five to seven times greater than retaining an existing one, it is clear to see this as something that no small business can afford.

Was there clear communication?

Would you recommend this contractor?

Was the jobsite clean and safe?

Was the construction high quality?

Was work completed on schedule?

Was the contractor professional and organized?

Did you feel you got your money&#39;s worth?

Was there clear communication?

Surveyed by a National Magazine

Did they minimize inconvenience

34% Would you recommend this contractor?

Was the jobsite clean and safe?

Was the workmanship professional?

34% Was work completed on schedule?

Was the contractor professional and organized?

The Results The surveys that were conducted by both Qualified Remodeler and GuildQuality (on behalf of CCN) had the homeowners rate their contractors in key areas such as overall satisfaction, professionalism, timeliness, fairness of price, quality of workmanship and whether they would recommend the contractor. The results speak for themselves—being a member of and receiving training from CCN is beneficial to both the consumer and the contractor. Non-CCN contractors had lower ratings on a year to year basis, while the CCN contractors saw their ratings greatly improve. The low ratings for non­members are reflected in the percentage of consumers who said they would recommend their contractor (55%) versus the extremely high ratings of our CCN members who would get the referral (97%). Clearly, being a member of CCN and receiving training for best practices leads to a huge payoff.

Conclusion In every category, CCN contractors had higher approval ratings than non-CCN contractors. If we look at the predictors of what makes a satisfied customer, we should consider jobsite cleanliness, timeliness, expectations and communication. If we look at each of these items, we find that CCN members had received much higher ratings than non-members, all resulting in a significantly higher approval rating.

Non-members received a 55% approval rating compared to our members receiving 97%. Through years of studying the industry, experts have found that there are several key indicators that will predict overall customer satisfaction: Jobsite cleanliness: At the end of each day, it is important to keep the project site clean and organized. Although most contractors focus on the actual production of the work, this simple task will change consumer perception more than anything else. In fact, surveys have shown that the contractors who scored high in this question were twice as likely to get referrals as those who scored low. Timeliness: Getting the job done on time is another good indicator. Most consumers who were satisfied with their contractors rated them highly in this area. In fact, consumers who were dissatisfied gave their contractor a score in the mid 30% range for timeliness. Expectations: Setting proper expectations is another key indicator. This is supported by years of data showing the importance of providing a realistic and clear idea about projects, prior to the start. Consumers who were given good information said they were prepared for the issues that presented themselves and gave high scores. On the other hand, consumers who were not given proper expectations gave some of the lowest ratings. Communication: It is crucial to be realistic in your communications with consumers. Contractors tend to make overly optimistic statements about completion times, prices and the quality of the product. Contractors who received high marks for communication were given an overall rating three to four times higher than the other contractors.

Higher approvals then translate to better referrals. CCN members were referred 97% of the time compared to non-members being referred only 55% of the time. This is all a testament to CCN’s best practices resulting in increased customer satisfaction, which then benefits the consumer and the contractor. The consumer gets a better product and more satisfying experience, and the contractor is rewarded with increased business through referrals and repeat cllients. Now, if we could only make being a member of CCN a licensing requirement in all 50 states! There would be a lot of happier consumers out there, that’s for sure. 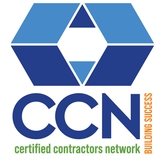