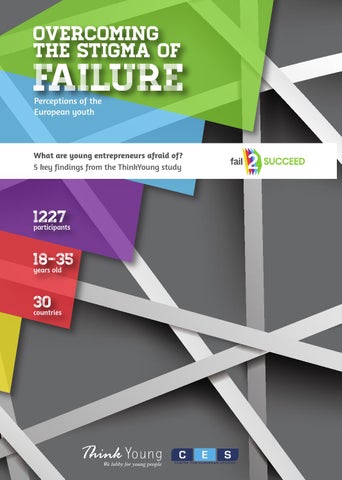 Overcoming the stigma of

failure Perceptions of the European youth

What are young entrepreneurs afraid of? 5 key findings from the ThinkYoung study

More than half of the words spontaneously associated with the concept of failure are negative.

Young Europeans who have had entrepreneurship experiences in the past are more likely to consider failure as useful for their personal development.

50% are convinced that failure will be perceived negatively by future business partners.

70% would be willing to give a second chance to someone who failed.

This gap has to be exposed, youngsters must be aware that peers appreciate failure experiences

Failure is perceived as a negative social label, but is regarded as positive in terms of business capabilities

More than 80% regard failure as necessary for their personal development.

75% 75% respondents think the main cause of the stigma resides in social expectations.

70% do not consider the prospect of failing as an obstacle to becoming an entrepreneur. Nevertheless, 2 out of 5 blame institutional policies and several indicated media as the main cause of the stigma.

The ThinkYoung proposal to harmonize the bankruptcy legislation in Europe, in line with the work of the European Commission, is regarded as “extremely effective or very effective” by 80% of respondents. Young Europeans do not blame governments or institutions.

35% For 35% family expectations are extremely relevant.

Regarding the solutions, three out of ten see in local, national or European institutions the most entitled to overcome the stigma... ...but almost 1 out of 2 indicates private actors (i.e. banks, venture capitalists, crowd funding).

An entrepreneurshipfriendly environment is the key to overcoming the stigma.

Eventually, creating specific funds to help failed entrepreneurs access credit has been labeled as «effective or extremely effective» by 75% of respondents.

Over the years, we at ThinkYoung have reached the conclusion that cultural barriers, such as the stigma of failure, need to be overcome in order to boost youth entrepreneurship. We are convinced that entrepreneurs, whether prospective or experienced, are facing a mix of both social and institutional pressures that cast a shadow over their future entrepreneurial activities. For this reason, we launched the campaign “Fail2Succeed” with the goal of changing the perception of business failure and of harmonizing the bankruptcy legislation at European level.

The campaign consists of: - a European survey - an audiovisual study - the mapping of all the European initiatives on failure - a series of conferences to be held in 2014 - a policy proposal for the European and national institutions.

Core Survey on the stigma of failure in Europe, conducted during November 2013. 1227 valid answers, 28 EU countries plus EFTA (mainly Switzerland and Norway), 18-35 years old. One language (EN), survey conducted online and in person (the latter in Brussels area), 31 questions. Population surveyed The vast majority of respondents has entrepreneurial experience, albeit indirect, but only 50% have experienced failure, directly or indirectly; • 50% students, 40% employed (either full time or temporary), 10% self-employed or unemployed; • 65% have at least a bachelor degree; • All fields of specialization, although business and economics are over-represented; • Respondents living in Belgium and Italy are slightly over-represented. All the other countries’ quotas are respected. Gender quota are respected; • More than 50% live in a big city (with more than 500 thousands inhabitants) and their parents did not graduate from university. Team members Head of research : Research team: Promotion team:

With the support of

ThinkYoung is a think tank that gives youth a voice. ThinkYoung engages young Europeans by providing a platform for debates with the decision-makers within Europe regarding ongoing issues. Successfully lobbying on behalf of European youth since 2007, ThinkYoung now has offices in Brussels and Geneva with another opening in Hong Kong in November 2013. Headquarter &amp; ThY/LAB ThinkYoung AISBL Place du Luxembourg 6 1050 Bruxelles Belgium T +32 2 608 82 10 info@thinkyoung.eu www.thinkyoung.eu www.facebook.com/thinkyoung Brussels, Geneva, Hong Kong

Overcoming the Stigma of Failure: Perceptions of the European youth 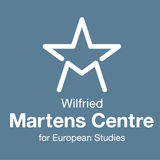