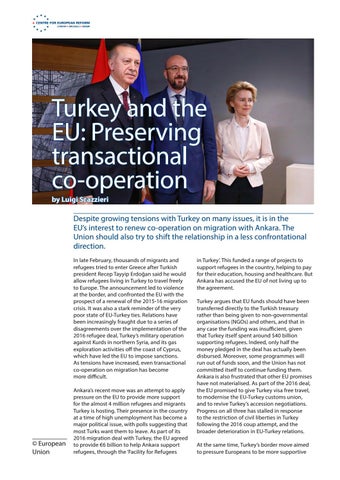 Turkey and the EU: Preserving transactional co-operation by Luigi Scazzieri

Despite growing tensions with Turkey on many issues, it is in the EU’s interest to renew co-operation on migration with Ankara. The Union should also try to shift the relationship in a less confrontational direction. In late February, thousands of migrants and refugees tried to enter Greece after Turkish president Recep Tayyip Erdoğan said he would allow refugees living in Turkey to travel freely to Europe. The announcement led to violence at the border, and confronted the EU with the prospect of a renewal of the 2015-16 migration crisis. It was also a stark reminder of the very poor state of EU-Turkey ties. Relations have been increasingly fraught due to a series of disagreements over the implementation of the 2016 refugee deal, Turkey’s military operation against Kurds in northern Syria, and its gas exploration activities off the coast of Cyprus, which have led the EU to impose sanctions. As tensions have increased, even transactional co-operation on migration has become more difficult.

Ankara’s recent move was an attempt to apply pressure on the EU to provide more support for the almost 4 million refugees and migrants Turkey is hosting. Their presence in the country at a time of high unemployment has become a major political issue, with polls suggesting that most Turks want them to leave. As part of its 2016 migration deal with Turkey, the EU agreed to provide €6 billion to help Ankara support refugees, through the ‘Facility for Refugees

in Turkey’. This funded a range of projects to support refugees in the country, helping to pay for their education, housing and healthcare. But Ankara has accused the EU of not living up to the agreement. Turkey argues that EU funds should have been transferred directly to the Turkish treasury rather than being given to non-governmental organisations (NGOs) and others, and that in any case the funding was insufficient, given that Turkey itself spent around $40 billion supporting refugees. Indeed, only half the money pledged in the deal has actually been disbursed. Moreover, some programmes will run out of funds soon, and the Union has not committed itself to continue funding them. Ankara is also frustrated that other EU promises have not materialised. As part of the 2016 deal, the EU promised to give Turkey visa free travel, to modernise the EU-Turkey customs union, and to revive Turkey’s accession negotiations. Progress on all three has stalled in response to the restriction of civil liberties in Turkey following the 2016 coup attempt, and the broader deterioration in EU-Turkey relations. At the same time, Turkey’s border move aimed to pressure Europeans to be more supportive

of Ankara’s actions in northern Syria. President Bashar al-Assad’s forces, backed by Russia, have been making substantial advances against the last Turkish-supported rebel stronghold of Idlib, killing scores of Turkish soldiers and pushing about one million people towards Syria’s border with Turkey. Ankara wants the EU and NATO to put pressure on Russia to de-escalate, and it also wants the Europeans to provide material support for displaced persons in Syria. While European leaders have condemned what they say is Ankara’s “use of migratory pressure for political purposes”, they have also sought to reduce tensions and to save the migration deal. Initial talks have had some success, with Turkey resuming some border co-operation. However, this is only a lull, as the EU and Turkey have not yet agreed on a way ahead for the migration deal. European leaders do not want to be seen to give in to Erdoğan’s demands for more money and assistance, and tensions could easily flare up again. While some member-states, such as Germany, favour pragmatic engagement with Turkey, others are taking a harder line. Greece and Cyprus, as well as France, are particularly angry about Turkey’s ongoing gas exploration efforts in Cyprus’ Exclusive Economic Zone in the Eastern Mediterranean, and by its maritime delimitation agreement with the Libyan Government of National Accord, which infringed on Greece’s Exclusive Economic Zone. It is in the EU’s interest to renew migration co-operation with Turkey and put it on a more solid footing. The EU should make clear that it is willing to continue to help Turkey to shoulder the burden of providing support for the refugees it is hosting. Given that the EU still lacks an effective asylum policy and is unwilling to take in large numbers of migrants and refugees, it is left with a choice between helping Turkey or using brute force to try to keep migrants out at the Greek border. Helping Turkey to support the refugees it is hosting is preferable, as repelling people at the border is both contrary to the EU’s international obligations to asylum seekers, and unlikely to be feasible if numbers rise significantly. The EU should continue to provide funds to organisations that support refugees, rather than to the Turkish government, to ensure that Turkey does not use money to resettle people to Syria against their will. Willing member-states should also offer to take in some of the most vulnerable refugees directly from Turkey. At the same time, the EU cannot insulate itself from the crisis in Syria, which is the root cause of the surge in refugees. The latest ceasefire agreed between Russia and Turkey is unlikely

to last. Russia’s aim remains to push Turkey out of Syria, allowing Assad to re-establish control over the whole country. But Moscow seems prepared to do so gradually in order to avoid a rupture in its relationship with Ankara, which it wants to nurture with a view to dividing NATO. This is a problem for the EU: if Idlib falls, then hundreds of thousands of refugees are likely to pour into Turkey and try to reach Europe. The Turkish idea that EU member-states should set up a no-fly zone to protect refugees in Syria and stop Assad’s offensive would require military engagement, and appears detached from the reality of what Europeans are willing to do. There is also no consensus in Europe or the US for substantially increasing the pressure on Russia to de-escalate. But this should not prevent member-states from increasing humanitarian support for displaced people in northern Syria. The recent spat over the migration deal shows the importance of maintaining some EU-Turkey co-operation. As the CER argued in 2018, even maintaining transactional co-operation in areas such as migration would be increasingly difficult without a broader positive agenda to structure EU-Turkey relations. It will be difficult to inject fresh impetus into talks over visa liberalisation or modernising the customs union as long as civil liberties in Turkey remain constrained and Ankara continues to fuel tensions in the Eastern Mediterranean. But the EU should still try to shift its relationship with Ankara in a less confrontational direction. Europe should show that it is willing to be generous in helping Turkey take care of refugees, and ready to increase dialogue and consultation over regional security. It should underline that it takes Turkey’s security concerns in Syria seriously and is willing to pressurise Russia to put a lasting ceasefire in place. Ultimately, however, whether EU-Turkey relations can significantly improve depends above all on what Ankara decides to do. This will be driven by how well the Turkish economy performs in the face of the coronavirus emergency, and how Turkey’s relations with Russia evolve. If the economy suffers, or if relations with Russia deteriorate as a result of renewed fighting in Syria, Ankara may be tempted to decrease tensions with Europe and the US. Europe should be ready to seize that opportunity. 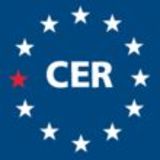