Shellfish Aquaculture in Washington: Pesticides, Plastics, and Pollution Impacts to Our Environment 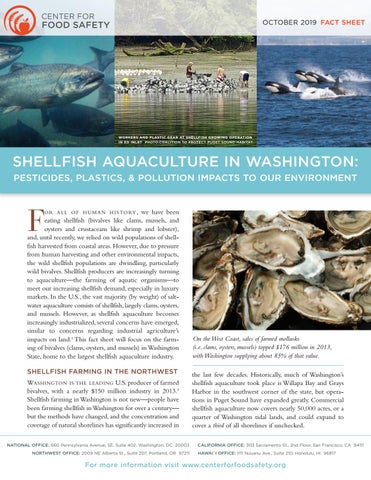 O R A L L O F H U M A N H I S T O RY , we have been eating shellfish (bivalves like clams, mussels, and oysters and crustaceans like shrimp and lobster), and, until recently, we relied on wild populations of shellfish harvested from coastal areas. However, due to pressure from human harvesting and other environmental impacts, the wild shellfish populations are dwindling, particularly wild bivalves. Shellfish producers are increasingly turning to aquaculture—the farming of aquatic organisms—to meet our increasing shellfish demand, especially in luxury markets. In the U.S., the vast majority (by weight) of saltwater aquaculture consists of shellfish, largely clams, oysters, and mussels. However, as shellfish aquaculture becomes increasingly industrialized, several concerns have emerged, similar to concerns regarding industrial agriculture’s impacts on land.1 This fact sheet will focus on the farming of bivalves (clams, oysters, and mussels) in Washington State, home to the largest shellfish aquaculture industry.

SHELLFISH FARMING IN THE NORTHWEST WASHINGTON IS THE LEADING U.S. producer of farmed bivalves, with a nearly $150 million industry in 2013.2 Shellfish farming in Washington is not new—people have been farming shellfish in Washington for over a century— but the methods have changed, and the concentration and coverage of natural shorelines has significantly increased in NATIONAL OFFICE: 660 Pennsylvania Avenue, SE, Suite 402, Washington, DC 20003 NORTHWEST OFFICE: 2009 NE Alberta St., Suite 207, Portland, OR 97211

On the West Coast, sales of farmed mollusks (i.e. clams, oysters, mussels) topped $176 million in 2013, with Washington supplying about 85% of that value. the last few decades. Historically, much of Washington’s shellfish aquaculture took place is Willapa Bay and Grays Harbor in the southwest corner of the state, but operations in Puget Sound have expanded greatly. Commercial shellfish aquaculture now covers nearly 50,000 acres, or a quarter of Washington tidal lands, and could expand to cover a third of all shorelines if unchecked. CALIFORNIA OFFICE: 303 Sacramento St., 2nd Floor, San Francisco, CA 94111 HAWAI&#96;I OFFICE: 1111 Nuuanu Ave., Suite 210, Honolulu, HI 96817

HOW ARE SHELLFISH FARMED? C OMMERCIAL SHELLFISH FARMING involves preparing the ocean bed where shellfish will grow (including the destruction of native species to clear the way for cultivated bivalves), seeding those shellfish, and then eventually harvesting when the shellfish are ready for market after a few years. Bivalves are either grown on the ocean floor (tide bed) or they are grown off the ocean floor using a variety of methods. Growing shellfish off the ocean floor requires the use of cages, rack-and-bags, trays, surface or floating structures, or long lines suspended over the tide bed.These methods all involve gear, which is predominantly plastic. For example, geoduck (clam) aquaculture uses PVC tubes stuck into the bed at a rate of 42,000 tubes per acre, which are covered with plastic “anti-predator” netting. To prepare

the tide bed, growers may “harrow” (a process similar to raking), till, or add crushed oyster shell or gravel to the ocean floor. Once the shellfish are fully grown, harvesting is done by hand or mechanically, or, in the case of geoduck, the sand is liquefied with high pressure water jets to dislodge clams. Shellfish are often re-seeded after harvest, so the cycle of impacts is essentially continuous. WHAT ARE THE ENVIRONMENTAL IMPACTS OF SHELLFISH FARMING? T HE TIDELANDS WHERE shellfish are farmed are home to a variety of vegetation (like eelgrass), fish (including endangered salmon), invertebrates (including native shellfish), birds, and whales like the critically endangered Southern Resident orcas. Eelgrass, in particular, is a highly valued source of shelter and food for these species. Eelgrass serves as an “ecosystem engineer” by slowing water flow, binding and stabilizing sediments, and mitigating the impacts of climate change by absorbing CO2 and increasing oxygen in the water. As the production of shellfish in Washington intensifies, more of the natural tidelands are being converted to shellfish production. The plastic gear used in production can be dislodged in storms or break down into microplastics, adding more plastics to our oceans and beaches—even showing up as far away as Hawaii—and acting as a poison pill to marine species that ingest microplastics coated in whatever pollutants are in the water (including the very shellfish grown for human consumption). While wild, native bivalves are known to clean water, the water quality impacts of intensive shellfish aquaculture may not always be beneficial; in fact, many aquaculture activities negatively affect water quality through the removal of eelgrass, the increase of wastes from concentrated production, and the disruption of sediments. One of the most significant potential environmental impacts from dense shellfish aquaculture is a reduction in shoreline biodiversity. Monocultures of shellfish can fundamentally alter ecosystems by consuming nutrients previously relied on by native species, depositing waste on the seabed, and changing the physical dynamics of an environment.

denied the Willapa Bay growers a permit to spray imidacloprid based on recent research and public outcry,6 the growers challenged this denial and continue to seek new chemical means to kill burrowing shrimp in Willapa Bay.

The growers in Willapa Bay and Grays Harbor also have a permit to spray imazamox, an herbicide, to kill introduced eelgrass (Z. japonica) and clear the way for increased clam production.7 While not native, this type of eelgrass has long grown on much of the West Coast and provides many of the same food, shelter, and habitat functions as native eelgrass.The state is proposing to renew the eelgrass spraying permit in 2019, despite calls for restoring eelgrass

PESTICIDES IN SHELLFISH FARMING P ESTICIDES (including herbicides and insecticides) are designed to harm or kill living things and are widely used in conventional land-based agriculture to kill weeds and insects. However, pesticides do not only kill the target pests; they also contaminate soil, air, and water, harming wild species. The same is true for pesticide use in aquaculture. The use of pesticides on tide beds to clear away wild species and allow intensive shellfish farming is particularly concerning due to impacts on biodiversity and health of tidal ecosystems.3 Washington is the only state that allows shellfish growers to spray pesticides on their shellfish beds. Growers in Willapa Bay and Grays Harbor have used carbaryl since the 1960s to kill native burrowing shrimp, which provide a variety of ecological functions, including the creation of a unique habitat beneath the surface through their burrowing, which supports more than a dozen other species. Although carbaryl (known to cause acute and chronic neurological problems) was phased out through local environmental groupsâ&amp;#x20AC;&amp;#x2122; advocacy, shellfish growers sought to replace it with imidacloprid, a neurotoxin insecticide in the neonicotinoid family, the insecticide family known to be extremely harmful to pollinators like honey bees.4 Neonicotinoids are not approved for use in water anywhere else in the county, due to their toxic effect on aquatic invertebrates and other types of aquatic wildlife.5 While the Washington State Department of Ecology recently

Pesticide use in Willapa Bay and Grays Harbor to kill burrowing shrimp and eelgrass adds to the contamination of the water and substrate, which can harm non-target organisms. Above: A high pressure pesticide injector on shellfish bed. Below: Aerial pesticide spraying on shellfish beds.

(tiny particles of plastic) known to absorb chemical contaminants from the water and act as poison pills to the organisms that ingest them, including the cultivated shellfish we eat.10 Spraying shellfish beds with pesticides raises similar concerns about residual pesticides in shellfish. As a result, it is crucial to limit both terrestrial sources of water pollution and intentionally-used inputs in aquaculture to protect the shellfish grown for human consumption. Polyvinyl chloride (PVC) plastic tubes like those pictured here are used, along with plastic netting, to exclude predators from geoduck beds and increase early survival. PVC has a toxic lifecycle and like other plastics used, such as high density polyethelene (HDPE), it may leach contaminates and break down into tiny particles. habitat and the lack of monitoring of impacts from the last five years of spraying. These pesticides do not just kill the target species—although these species serve crucial ecological functions—they also harm other invertebrates living in the substrate, as well as the fish, native eelgrass, and other species that rely on these species for food and shelter (like resident orcas that rely on salmon for food). WHAT ARE THE PUBLIC HEALTH CONCERNS? B ECAUSE BIVALVES FILTER the water, they ingest whatever pollutants or other substances are present. This may include bacteria, viruses, or toxic algae, which can cause food poisoning (if consumed raw), bacterial infections, and, in rare cases, death.8 Recently, the Washington Department of Fish &amp; Wildlife studied the uptake of toxic contaminants in near-shore mussels in the Puget Sound.9 Focusing on contaminants from terrestrial sources, the study found PCBs, DDTs, PAHs (from fossil fuels), and PBDEs (or flame retardants) in mussels from every site studied. Mussels are used to study contamination levels precisely because they, like other bivalves, concentrate pollutants. Other contaminants in the ocean include microplastics 1 The Coalition to Protect Puget Sound Habitat, The Social and Environmental Impacts of Industrial Aquaculture in Washington State, http://goo.gl/jj4zTm; Ctr. For Food Safety v. U.S. Army Corps of Engineers, No. 17-1209RSL, 2019 WL 5103309 (W.D. Wash. Oct. 10, 2019), http://bit.ly/2MlkD9d; NOAA Fisheries, ESA Section 7 Formal Biological Programmatic Opinion for Shellfish Aquaculture Activities in Washington State (Sept. 2016), http://bit.ly/2qd7Soy. 2 Washington Shellfish Initiative Fact Sheet, http://bit.ly/2IYj0w0. 3 See e.g., CFS, Water Hazard 2.0: Continued Aquatic Contamination by Neonicotinoid Insecticides in the U.S. (2017), http://bit.ly/32rDyov; Morrissey, C. A., P. Mineau, J. H. Devries, F. Sanchez-Bayo, M. Liess, M.C. Cavallaro, and K. Liber. 2015. Neonicotinoid contamination of global surface waters and associated risk to aquatic invertebrates: a review. Environment International 74:291-303; Margaret Eng et al. 2019. A neonicotinoid insecticide reduces fueling and delays migration in songbirds. Science, https://science.sciencemag.org/content/365/6458/1177; Goulson, D. 2017. REVIEW: An overview of the environmental risks posed by neonicotinoid insecticides. Journal of Applied Ecology, 50(4), pp. 977-987. 4

WHAT YOU CAN DO W E DO NOT have to sacrifice our public waters and wild shorelines to industrial shellfish aquaculture. First, you can research the source of your shellfish and only buy from growers that use methods that mirror the natural ecosystem, allowing a variety of native species to flourish alongside commercial shellfish, and from growers who forgo the use of pesticides and plastics.11 Second, you can demand that state and federal regulators12 critically assess the impacts of commercial shellfish aquaculture on natural shorelines and species, and speak out against the use of toxic pesticides in our marine ecosystem. Sign up for CFS’s True Food Network to receive updates with new opportunities to make your voice heard in efforts to protect our invaluable estuaries, shorelines, and iconic species of the Pacific Northwest. The shellfish operation pictured here in Grays Harbor does not use any pesticides, and the grower is able maintain a healthy, bio-diverse, and productive oyster bed. FMO AQUACULTURE

Shellfish Aquaculture in Washington: Pesticides, Plastics, and Pollution Impacts to Our Environment

Washington is the leading U.S. producer of farmed bivalves, with a nearly $150 million industry in 2013. As the production of shellfish in Washington intensifies, more of the natural tidelands are being converted to shellfish production. One of the most significant potential environmental impacts from dense shellfish aquaculture is a reduction in shoreline biodiversity. Additionally, the plastic gear used in production can be dislodged in storms or break down into microplastics, adding more plastics to our oceans and beaches. 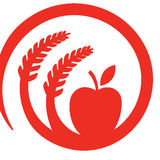 More from Center for Food Safety