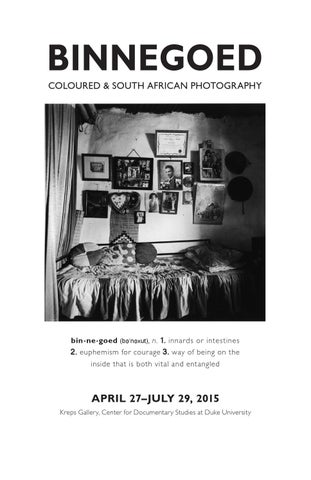 bin •ne •goed (bә΄nәxut), n. 1. innards or intestines 2. euphemism for courage 3. way of being on the inside that is both vital and entangled

INNEGOED: Coloured &amp; South African Photography revisits Apartheid through the work of sixteen photographers who lived and worked during this period of legalized racial segregation. It reflects on the country’s history of race classification to consider what it meant to be neither Black nor White but classified as Coloured even a century before Apartheid began. Through archival photography, BINNEGOED makes visible small Coloured histories that, while marginal to the story of South Africa today, are rooted deep within the country and its body politic. All images are curated from the following collections in the Archive of Documentary Arts at Duke University: the South Africa Documentary Photographs Collection (1940s–2007), the Paul Weinberg Photographs collection (1979–2004), and the David Goldblatt Photographs and Film collection (1960–1976). These collections are all held at the David M. Rubenstein Rare Book and Manuscript Library. The exhibition includes thirty-nine collectible photographic postcards, two large prints, a framed family photograph, and an audio recording in Afrikaans. This guide contains both the Afrikaans text and the English translation of the audio.

A NOTE ON LANGUAGE

Omar Badsha | Durban | 1983 Pensioner in buffer zone between the African township of KwaMashu and the “coloured” township of Newlands East.

he texts in BINNEGOED capitalize Apartheid in the spirit of remembering its institutionalized madness and brutality,

like the regimes of Nazi Germany or the Jim Crow South. The term Coloured appeared in the Union of South Africa’s first census in 1911 and was used during Apartheid and is still in use by the census today.

Coloured (written in lower case ‘c’) or “coloured” are used in the cited historical texts, which employ the term to demonstrate an awareness of the politics associated with this classification.

The term Black does not only refer to peoples classified as African today. In South Africa’s current racial categorical

system, African denotes Black Africans and does not include Coloureds. However, some historical texts referenced in this exhibition make a distinction between Coloured and African. Black is used here to denote a political identity of Apartheid resistance that included all people of color. Black Coloured is a term used to reference Coloured selfidentification as Black during Apartheid. Finally, BINNEGOED also refers to the â&amp;#x20AC;&amp;#x153;first indigenous African peoplesâ&amp;#x20AC;? who were classified as Coloured, a heterogeneous group distinct from Black Africans. These groups classified as Coloured were called Hottentot, Bushmen, Koranna, Nama, and Griqua, and their status as indigenous people is akin to that of Native American populations in the United States.

The title of this exhibition begins with an Afrikaans word for innards or intestines. It describes a cultural root born from the bowels of colonial encounter that today remains inextricable from the South African body politic. This is the origin of Coloured, a racial category made official under British rule a century before Apartheid began. The Union of South Africaâ&amp;#x20AC;&amp;#x2122;s first census in 1911 used the category Mixed and Other Coloured to describe those of European, Asiatic slave, and first indigenous African descent.

These groups were specified as Asiatic, Malay, Hottentot, Bushmen, Koranna, Nama, Griqua, and Other. The category included people from Mozambique. In 1950, two years after Apartheid was established, the official definition of Coloured separated these peoples from their already faint indigenous and transnational origins. The country’s Population Registration Act ratified Coloured as an identity of absence. The law defined a Coloured person as neither a white person nor a native. Since the fall of Apartheid, the language of categorization in South Africa articulated a new racial order that finally severed Coloureds from their now forgotten origins. Current categories of persons recorded in the South African census are Coloured, Indian, White, Other, and African. Fixed categories of race in South Africa belie the reality of entanglement that has always existed between those classified as Coloured and other racial groups. Throughout history, the state used the position of Coloured in the hierarchy of race to breed division among people of color and entrench white supremacy. And so, the category also served as a gateway for false privilege: Many Blacks, Indians (and others who could) passed as Coloured; many Coloureds passed as White. Coloured self-identification lived between these establishment and subversive ways of being. During “the struggle” many Coloureds were left with two choices—they could be Coloured and comply with Apartheid, or be Black and resist the system. Coloureds who chose Apartheid

resistance, then, trusted that they were Black. Overcoming this common enemy demanded a racial solidarity without difference. So rallied the United Democratic Front (UDF), the pivotal, domestic resistance movement that rose up against Apartheid in reaction to the Tricameral Parliament in 1983. Through this strategy, government attempted to co-opt Coloureds and Indians against Blacks, who alone were denied the right to vote. The UDF and its leadership dissolved into the African National Congress (ANC) shortly after Nelson Mandela was freed and the ANC unbanned from exile. In the new South Africa, Blackness became a metaphor of the past and “Black Coloureds” a particular relic of the old dispensation. Eugene Paramoer is one such Black Coloured. He came of age as a youth leader on the Cape Flats during the time of the UDF. More than a decade later, Paramoer conveys what now has become a common story for Black Coloureds of his generation: We were disgusted with the label Coloured and we would say . . . “so-called Coloured people” . . . meaning we didn’t call ourselves Coloured people. . . . It was the name given to us by our oppressors, the colonialists, and the Afrikaner nationalists. . . . People didn’t see themselves, I didn’t see myself, as Coloured. Then I was Black. I saw myself as a Black person fighting for the interests of the Black people. . . . [Now] I would say I’m a Coloured. And I wouldn’t have said that ten years agoi.

am classified as Coloured. My parents are, as were my grandparents, the first generation in South Africa to be born Coloured. My paternal grandfather lived in Tarka, a rural fishing community that no longer exists in Mossel Bay. Those who remember Tarka remember waiting for my grandfather to return from a day’s work slaughtering animals. They waited for the entrails—die binnegoed—that he would bring home and share among them. As a child I heard this story in my mother tongue, Afrikaans, a language most spoken today by those classified as Colouredii. Yet, Afrikaans lives on in the national psyche as “the language of the oppressor.” The memory of Apartheid as a singular consequence of racism has become the subject of many exhibitions and archives around the world. BINNEGOED: Coloured &amp; South African Photography skins this monumental Apartheid to begin uncovering some of what lives deep within the bigger story of my country. The photographs in the exhibition offer traces of these small histories that have been buried deep within the monolith of history in South Africa. –Candice Jansen, Curator 2014–15 Exhibitions Intern, Center for Documentary Studies

INNEGOED: Coloured &amp; South African Photography was inspired by an encounter identical to the one Toni Morrison describes in the epigraph to her novel Home (2012). Like Morrisonâ&amp;#x20AC;&amp;#x2122;s character, I too entered a house I had never been in before, and once I entered it, was overcome by a strange sense of belonging. I knew every room. I knew that close by the living room door, there would be a rectangular barred window that looked out onto the street. I knew that the living room would have a narrow doorway to a short passage that to my right would lead to a small kitchen, and to my left, to two bedrooms. I knew that between one bedroom and the kitchen was a little bathroom. Its door, when closed, I knew was the only private space visible from either outside the front door or from the settee against the wall under the rectangular window. I even knew that the focal point of the living room pointed to the wall farthest from the front door, on the side of the living room where the television and the biggest cabinet of memorabilia stood. This was the familiar feeling I felt inside an unfamiliar house. A felt memory like this came over me again upon uncovering a photograph from its archival box. Utterly unique among other images in the collections I saw, the photograph framed an intimate look of an unknown woman in a dark housecoat, hands resting in her lap. The

photographer who made the image was Anne Fischer, who fled Nazi Germany and made a name for herself as a photographer in Cape Town. This photograph is part of her visual record of life, before the rise of Apartheid, in the small rural community of Genadendal. Today, more than 90 percent of the population there is classified as Coloured. Originally known as Bavianskloof, Genadendal was South Africa’s first mission station, established in 1738. Its historical significance is recognized in the name of the official residence of South Africa’s president, which Nelson Mandela renamed Genadendal in 1994. I knew about Genadendal (which means “valley of grace”) from my mother, who grew up in an even smaller town nearby. She had showed me an old family photograph of my great-great-grandmother, who worked as a midwife in Genadendal. As far as I understand, this is the only known image left of her. My extended family believes it commemorates a celebration of her ninetieth birthday. Her name was Maria Afrika and she lived to the age of 102. The family photograph and the image of the unknown woman who Anne met are connected for me because of Genadendal, a place much like the archive—a place of long histories ordinary and important, private and public, big and small. In search of these nested pasts, I set off by remembering photographs of graceful gestures in familiar housecoats.

Free and open to the public

South Africa during Apartheid is revisited here through the work of sixteen photographers who lived and worked during this period of legalized racial segregation. BINNEGOED: Coloured & South African Photography reflects on the country’s history of race classification to consider what it meant to be neither Black nor White, but classified as Coloured even a century before Apartheid began. With archival photography, BINNEGOED makes visible these small Coloured histories that, while marginal to the story of South Africa today, are rooted deep within the country and its body politic. Drawn from collections held in Duke University’s Archive of Documentary Arts at the David M. Rubenstein Rare Book and Manuscript Library, including the South Africa Documentary Photographs Collection, BINNEGOED exhibits the work of some photographers who came of age during Apartheid defiance. 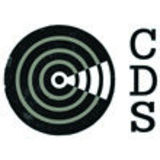