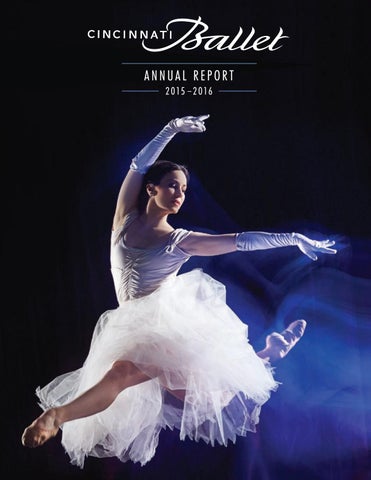 This past year was a great one for Cincinnati Ballet. Thank you for being with us, to witness and to sustain our quest to bring hope and joy to our community and beyond through the power and passion of dance. The 2015–2016 Season was filled with exciting and inspiring highlights, beginning with the annual Kaplan New Works Series, a program that has become one of our most popular, featuring world premieres and unexpected innovations. Gabriel Gaffney Smith’s pas de deux was a favorite of New Works audiences and in celebration of World Ballet Day, dancers James Gilmer and Christina LaForgia Morse took to the streets and recreated the duet in familiar and surprising Cincinnati locations. It was captured in a beautiful film and experienced online by tens of thousands of people from 103 countries.

In October, the elegant, full–length classical ballet, Lady of the Camellias, choreographed by Val Caniparoli, was filled with kinetic and courageous artistry, a poignant story, and brilliant, moving performances by our astounding dancers. The 2015 Frisch’s Presents The Nutcracker was extra–special as we offered a sensory–friendly performance for children with varying specific needs, and their families. We are excited to continue offering a sensory–friendly performance in 2017 with our Ballet Toybox: Swan Lake Jr. performance. Cinderella was completely refurbished and reimagined thanks to the generous support of PNC. Families flocked to performances as many of our community’s youth were introduced to the wonderment and beauty of ballet for the first time. In March, Wild Sweet Love featured our unique partnership with BalletMet Columbus. This incredibly in–depth collaboration, the only of its kind in our industry, is an exhilarating experience for the artists as well as the audiences of Cincinnati and Columbus. Director’s Choice highlighted a national conversation in the dance field and a mission dear to our company — featuring the ideas, voices and work of female choreographers, a group of artists who are often underrepresented in the ballet world. The series featured four distinct choreographic voices and was a favorite among our audiences. In 2017 we will again feature an all–female– choreographer program in April with The Kaplan New Works Series.

We finished the 2015–2016 Season with momentum and unprecedented financial stability, deep community impact, our highest–ever Academy attendance and consistent richness of adventure on stage. As you know, our 2016–2017 Season is a momentous one, featuring Victoria’s 20 th, Scott Altman’s arrival as Executive Director, and touring to the world–renowned John F. Kennedy Center for the Performing Arts in Washington, D.C. We extend special thanks to Kelly Brown, our most recent Board Chair for the past two seasons. While in this position, Kelly has been an incredibly devoted leader of our Board of Trustees and her passion, intelligence and efforts have made a substantial and long–lasting impact on our company. Plans for our future include our move back to historic Music Hall for the 2017–2018 Season, expanded performances, more live music, more Academy offerings, the search for a new facility and more. Your support enables us to dream big and continue to bring hope, joy, and inspiration to the Cincinnati community and beyond — and for that we are deeply thankful.

The future is bright for Cincinnati Ballet, and we are so grateful that you are a part of our family.

All My Favorite People MUSIC:

Mind on the {Re} Wind WORLD PREMIERE

REVENUE BY PERFORMANCE The Nutcracker

Lady of the Camellias The Kaplan New Works Series

• 15 participants graduated, with more than 60 family members in attendance • Early findings from post–assessment found increases in strength, endurance and the ability to focus on the task at hand

Community Night • 1,600+ children and their families attended dress rehearsal for The Nutcracker • Continued partnership with Most Valuable Kids • For many, it was the first time at the ballet!

• 746 attendees: many children with specific sensory needs and their families experienced The Nutcracker for the first time

The Cincinnati Ballet Second Company, directed by Suzette Boyer Webb, is a community engagement force throughout Greater Cincinnati. Dancers are early career artists, hailing from across the country, and play a key role in exciting and inspiring the Greater Cincinnati community with the joy of dance!

The Estate of Louise Dieterle Nippert

FOUNDATION BOARD OF DIRECTORS

AT TITUDE ASSOCIATE BOARD Alex Fischer

ASSISTANT TO THE EXECUTIVE DIRECTOR &amp; BOARD LIAISON

Courtesy of Mercy Health Orthopedics &amp; Sports Medicine Backstage and Front of the House Employees are represented by the International Alliance of Theatrical Stage Employees (or I.A.T.S.E.). 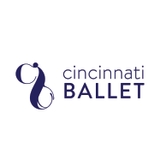