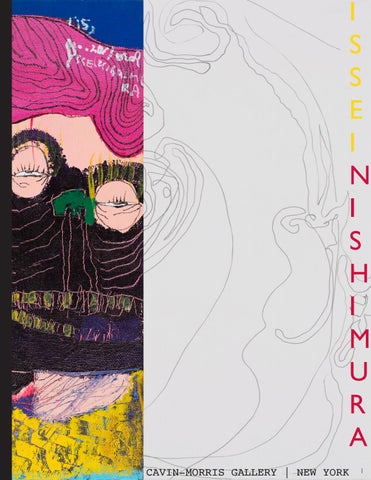 ISSEI NISHIMURA’S SOULFUL, EXPRESSIONISTIC ART Intense and deeply personal, the Japanese self-taught artist’s work, now in its first-ever New York solo survey, defies easy labels. In recent years, some of the most active dealers and collectors in the outsider-art field have been looking beyond Europe and North America in search of interesting discoveries from other parts of the world, including East Asia and Southeast Asia. Among the more interesting finds to recently emerge have been the hard-to-classify drawings and paintings of the prolific Japanese autodidact Issei Nishimura, which pose something of a challenge for art sellers and buyers alike who want or need category labels to help them grasp what’s going on in his work. For Nishimura’s art is all punch and potency; its genre label might be something as unique as “expressionistic/psychological/automatist/psychedelic-baroque.” Now, with Painting the Japanese Blues: Introducing Issei Nishimura, Cavin-Morris Gallery is presenting a first-ever US solo exhibition of this artist’s works (on view through February 15) at its Chelsea venue. Although the gallery showed a handful of his paintings at the Outsider Art Fair in New York a few weeks ago, and at last year’s fair as well, this presentation offers a broader survey of Nishimura’s inventive techniques and a concentrated sampling of the intense creative energy — and often bizarre imagery — that characterize his oeuvre. Yutaka Miyawaki, the Kyoto-based dealer who represents Nishimura in Japan, and with whom Cavin-Morris has collaborated in mounting its current show, told me during his visit to the recent Outsider Art Fair in New York: “Perhaps it’s not even worth referring to Nishimura as an outsider, because what he produces is not what people who are familiar with that kind of art expect to see. I regard him as a contemporary artist — period. However, he is self-taught and he does live in isolation, on the margins of society, and his work 4

reflects an unusual, deeply personal vision. These characteristics are all associated with art brut or outsider art.” (An illustrated Galerie Miyawaki catalog of Nishimura’s work from 2014 can be found here.) Nishimura was born in 1978 in Aichi Prefecture, in south-central Japan. Today, he lives with his parents in their family home in the hills on the edge of Nagoya, a commercial-industrial city that is Aichi’s capital. There, Nishimura keeps a modest studio space that spills out into a garden, in which he has painted the rocks of a stone path and even some sides of the house. As a youngster, Issei enjoyed making drawings; later he became interested in American blues music and began playing the electric guitar. He remains enchanted by the mythical legend of the Black American bluesman, Robert Johnson (1911-1938), who supposedly sold his soul to the Devil in exchange for his musical talent. As a young man, Nishimura moved to Tokyo to study music, but he did not easily adjust to big-city life, and socializing was difficult, too. Ultimately, he withdrew from society, returned to the family home, and devoted himself to his art-making, which had begun to occupy a central place in his life. He still enjoys and plays music, but he almost never ventures out or receives visitors. Last summer, however, during a research trip to Japan, I was invited by the artist and his family to visit them at their home. That day, his parents told me, their son was both nervous and excited to receive a visitor who was interested in his work. As Nishimura began to feel at ease, he explained that he often begins a new composition spontaneously, without a lot of preliminary planning, and that his subjects may be inspired by his interests — music, his cat or other animals, plant forms, or a sudden thought or visual impression. Various rooms of the Nishimuras’ house were stocked with Issei’s stored artworks, including many picture-filled sketchbooks and boxes full of small, postcard-size ink drawings. From one box, the artist pulled out a remarkable suite of portraits of his uncles, aunts, and other relatives. “Are these accurate likenesses?” I asked his parents. “Yes!” the artist’s mother responded enthu5

siastically, adding, “They’re both caricatures and recognizable portraits at the same time.” By contrast, many of the images to be found in the artist’s Cavin-Morris survey feature exaggeratedly distorted faces or bodies; these are the kinds of pictures that tend to fill his sketchbooks. In the drawing “Moonrise” (2018, ink on paperboard), Nishimura stretches out a woman’s neck like gooey taffy, topping it with a noseless, girlish head that resembles a balloon tethered to a long string. This peculiar nude’s breasts seem to dangle from her body like misplaced ornaments, and each of her hands resembles some kind of leafy growth. In other drawings in ink on paper or paperboard, Nishimura obscures faces or body parts in thickets of dense, wiry lines, or he depicts mysterious, toothy creatures that appear to emerge from a common body or share a common tail. (Japanese viewers may recognize their inspiration in monsters from Godzilla stories.) Nishimura’s paintings can be completely unpredictable from one to the next. In the current exhibition, bold palettes and abstract shapes that sometimes camouflage or unexpectedly transform themselves into more recognizable forms turn up in such images as “Untitled” (2013, acrylic and crayon on fabric, mounted on plywood), in which what appears to be a yellow fish with an open mouth makes its way horizontally across the composition, only to blend into what may be read as a human figure in profile, even as the artist throws in the outline of a front-facing body. In “My Mother’s Permed Hair” (2013, acrylic on fabric, mounted on plywood), a voluminous, yellow-pink coif surrounds a distorted, abstracted face that would have made the Surrealists proud. In fact, Miyawaki told me, Nishimura made this painting one day right after his mother returned from a beauty parlor, where, for the first time in many years, she had had her hair permed, a change in appearance that shocked her son. “Fear of Eye” (2013, acrylic on canvas), the largest painting on view, is also the exhibition’s most complex image. By e-mail, Miyawaki sent me several photos documenting this work’s evolution over time; through several differ6

ent stages, the artist frequently — and often rather thoroughly — overpainted his composition until arriving at a final, bold image, in which a big, broad face with what appear to be four eyes stares out more eerily than menacingly at a viewer. Later, commenting on this picture, Nishimura explained to Miyawaki that he had been bullied as a child and that, even today, he feels a traumatic reaction when people look at him. When I met the artist last year, he told me that he works feverishly on his drawings, sometimes filling several sketchbooks in a single day, and that he tends to work intensively for varying periods of time, with in-between lulls, during which he rests, enjoys his music, and develops new visual ideas. But he can be impulsive, too, seizing his pens or paints to immediately capture something he has observed or an image gestating in his imagination, from lounging cats to mushrooms, lyrically abstracted females forms, and enigmatic, fractured faces. In Japan today, difficult-to-categorize artworks like Nishimura’s can — and perhaps should — be appreciated in the wider context of expressionist and abstract art forms, of which Japanese modernists, from members of the postwar Gutai group to the multidisciplinary artist Taro Okamoto (1911-1996), certainly have put forth their own distinctive offerings. For now, Nishimura’s US debut opens the door a bit wider to contemporary developments in the field of so-called self-taught art in Asia, shaking up expectations about the character and appearance of the work of such remarkable autodidacts. 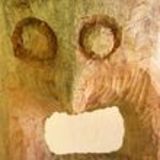