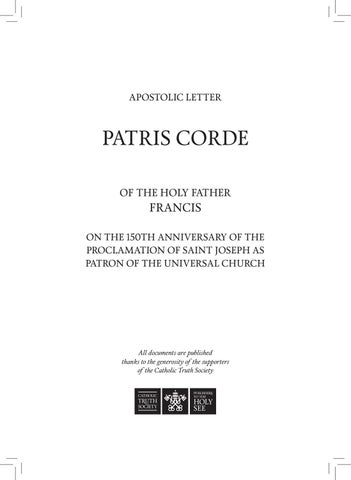 PATRIS CORDE OF THE HOLY FATHER

ITH A FATHER’S HEART: that is how Joseph loved Jesus, whom all four Gospels refer to as “the son of Joseph”.1

Matthew and Luke, the two Evangelists who speak most of Joseph, tell us very little, yet enough for us to appreciate what sort of father he was, and the mission entrusted to him by God’s providence. We know that Joseph was a lowly carpenter (cf. Mt 13:55), betrothed to Mary (cf. Mt 1:18; Lk 1:27). He was a “just man” (Mt 1:19), ever ready to carry out God’s will as revealed to him in the Law (cf. Lk 2:22,27,39) and through four dreams (cf. Mt 1:20; 2:13,19,22). After a long and tiring journey from Nazareth to Bethlehem, he beheld the birth of the Messiah in a stable, since “there was no place for them” elsewhere (cf. Lk 2:7). He witnessed the adoration of the shepherds (cf. Lk 2:8-20) and the Magi (cf. Mt 2:1-12), who represented respectively the people of Israel and the pagan peoples. Joseph had the courage to become the legal father of Jesus, to whom he gave the name revealed by the angel: “You shall call his name Jesus, for he will save his people from their sins” (Mt 1:21). As we know, for ancient peoples, to give a name to a person or to a thing, as Adam did in the account in the Book of Genesis (cf. 2:19-20), was to establish a relationship. In the Temple, forty days after Jesus’s birth, Joseph and Mary offered their child to the Lord and listened with amazement to Simeon’s prophecy concerning Jesus and his Mother (cf. Lk 2:22-35). To protect Jesus from Herod, Joseph dwelt as a foreigner in Egypt (cf. Mt 2:13-18). After returning to his 1

own country, he led a hidden life in the tiny and obscure village of Nazareth in Galilee, far from Bethlehem, his ancestral town, and from Jerusalem and the Temple. Of Nazareth it was said, “No prophet is to rise” (cf. Jn 7:52) and indeed, “Can anything good come out of Nazareth?” (cf. Jn 1:46). When, during a pilgrimage to Jerusalem, Joseph and Mary lost track of the twelve-year-old Jesus, they anxiously sought him out and they found him in the Temple, in discussion with the doctors of the Law (cf. Lk 2:41-50). After Mary, the Mother of God, no saint is mentioned more frequently in the papal magisterium than Joseph, her spouse. My Predecessors reflected on the message contained in the limited information handed down by the Gospels in order to appreciate more fully his central role in the history of salvation. Blessed Pius IX declared him “Patron of the Catholic Church”,2 Venerable Pius XII proposed him as “Patron of Workers”3 and Saint John Paul II as “Guardian of the Redeemer”.4 Saint Joseph is universally invoked as the “patron of a happy death”.5 Now, one hundred and fifty years after his proclamation as Patron of the Catholic Church by Blessed Pius IX (8th December 1870), I would like to share some personal reflections on this extraordinary figure, so close to our own human experience. For, as Jesus says, “out of the abundance of the heart the mouth speaks” (Mt 12:34). My desire to do so increased during these months of pandemic, when we experienced, amid the crisis, how “our lives are woven together and sustained by ordinary people, people often overlooked. People who do not appear in newspaper and magazine headlines, or on the latest 2 S. Rituum Congregatio, Quemadmodum Deus (8th December 1870): ASS 6 (187071), 194.

television show, yet in these very days are surely shaping the decisive events of our history. Doctors, nurses, shopkeepers and supermarket workers, cleaning personnel, caregivers, transport workers, men and women working to provide essential services and public safety, volunteers, priests, men and women religious, and so very many others. They understood that no one is saved alone… How many people daily exercise patience and offer hope, taking care to spread not panic, but shared responsibility. How many fathers, mothers, grandparents and teachers are showing our children, in small everyday ways, how to accept and deal with a crisis by adjusting their routines, looking ahead and encouraging the practice of prayer. How many are praying, making sacrifices and interceding for the good of all”.6 Each of us can discover in Joseph – the man who goes unnoticed, a daily, discreet and hidden presence – an intercessor, a support and a guide in times of trouble. Saint Joseph reminds us that those who appear hidden or in the shadows can play an incomparable role in the history of salvation. A word of recognition and of gratitude is due to them all.

1. A BELOVED FATHER The greatness of Saint Joseph is that he was the spouse of Mary and the father of Jesus. In this way, he placed himself, in the words of Saint John Chrysostom, “at the service of the entire plan of salvation”.7 Saint Paul VI pointed out that Joseph concretely expressed his fatherhood “by making his life a sacrificial service to the mystery of the incarnation and its redemptive purpose. He employed his legal authority over the Holy Family to devote himself completely to them in his life and work. He turned his human vocation to domestic love into a superhuman oblation of himself, his heart and all his abilities, a love placed at the service of the Messiah who was growing to maturity in his home”.8 Thanks to his role in salvation history, Saint Joseph has always been venerated as a father by the Christian people. This is shown by the countless churches dedicated to him worldwide, the numerous religious Institutes, Confraternities and ecclesial groups inspired by his spirituality and bearing his name, and the many traditional expressions of piety in his honour. Innumerable holy men and women were passionately devoted to him. Among them was Teresa of Avila, who chose him as her advocate and intercessor, had frequent recourse to him and received whatever graces she asked of him. Encouraged by her own experience, Teresa persuaded others to cultivate devotion to Joseph.9 Every prayer book contains prayers to Saint Joseph. Special prayers are offered to him each Wednesday and especially 7 8 9

during the month of March, which is traditionally dedicated to him.10 Popular trust in Saint Joseph is seen in the expression “Go to Joseph”, which evokes the famine in Egypt, when the Egyptians begged Pharaoh for bread. He in turn replied: “Go to Joseph; what he says to you, do” (Gen 41:55). Pharaoh was referring to Joseph the son of Jacob, who was sold into slavery because of the jealousy of his brothers (cf. Gen 37:11-28) and who – according to the biblical account – subsequently became viceroy of Egypt (cf. Gen 41:41-44). As a descendant of David (cf. Mt 1:16-20), from whose stock Jesus was to spring according to the promise made to David by the prophet Nathan (cf. 2 Sam 7), and as the spouse of Mary of Nazareth, Saint Joseph stands at the crossroads between the Old and New Testaments.

Every day, for over forty years, following Lauds I have recited a prayer to Saint Joseph taken from a nineteenth-century French prayer book of the Congregation of the Sisters of Jesus and Mary. It expresses devotion and trust, and even poses a certain challenge to Saint Joseph: “Glorious Patriarch Saint Joseph, whose power makes the impossible possible, come to my aid in these times of anguish and difficulty. Take under your protection the serious and troubling situations that I commend to you, that they may have a happy outcome. My beloved father, all my trust is in you. Let it not be said that I invoked you in vain, and since you can do everything with Jesus and Mary, show me that your goodness is as great as your power. Amen.”