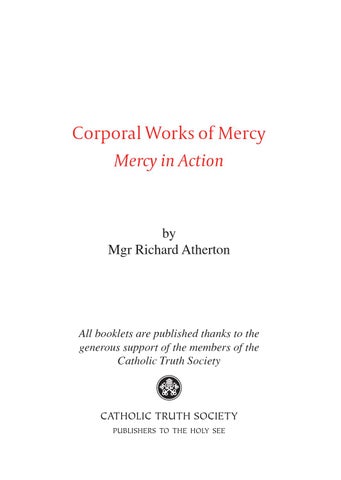 publishers to the holy see

Mercy in Action I do not think there is a Gospel phrase which has made a deeper impression on me…than this one: “Insofar as you did this to one of the least of these brothers of mine, you did it to me”. One has only to think that these words were spoken by the uncreated Truth, who also said, “this is my body…this is my blood”.1 The kindly American In spring 1986 two grey-haired men met and greeted each other warmly. Their last meeting had been forty years earlier. Then they had met as enemies. Then their meeting had been in a dark cave in Okinawa. Now they met in the bright lights of Tokyo’s International Airport. And this time they met as friends. One was Japanese, Ishibasi, the other an American, a former sergeant, Ponich. In 1946 in the mouth of a cave in Okinawa, Ponich was holding a young Japanese boy in his arms; the five-year-old youngster had been shot through both legs. When Ishibasi and his colleague, both of them snipers, suddenly leaped out of the dark recesses of the cave where they’d been hiding and confronted the American with guns raised and about to fire, the situation seemed hopeless. But Ponich

gently laid the boy on the ground, took out his first-aid kit, and began to clean the wounds. As he humbly explained later, he could think of no better way of preparing for death that by an act of mercy. But his act of mercy begot another. The snipers, amazed at what they’d seen, slowly lowered their rifles. Ponich took up the child in his arms, bowed in gratitude to the two Japanese, and carried the boy to a field hospital. Four decades later he wrote to a Tokyo newspaper, belatedly thanking the Japanese people because two of their soldiers had once spared his life. Ishibasi read the letter and contacted the newspaper, and so the meeting with Ponich was arranged.2 The kindly American “could think of no better way of preparing for death than by an act of mercy”. At any time, mercy is the form that love takes in the face of human distress. And so God, who is love, is also mercy. Mercy is, if we can put it this way, in his DNA! The Polish nun Sr Faustina, whom Pope St John Paul II called “the great apostle of Divine Mercy in our time”, wrote in her diary that God’s mercy is “the greatest and highest of the divine attributes” and is “divine perfection pure and simple”.3 Those bold words only re-echo all that the Bible has to tell us. “God of mercy and compassion” In the Old Testament God is revealed to Moses as “merciful and gracious…abounding in steadfast love and faithfulness”

(Ex 34:6). The Hebrew words used to describe the bond between God and his people suggest that God’s mercy is one of loving faithfulness: it is like the love of a mother for the child of her womb, it is utterly dependable. Chapter 11 of Hosea, one of the highpoints of Old Testament theology, pictures God as a doting parent, whose patience has been tried to the limit by rebellious children; the temptation to punish may be strong, but infinite compassion prevails, because, says the Lord through his prophet: “I am God and not mortal”; human mercy at its best is but the palest shadow of the divine mercy. The psalmist proclaims over and over again that “his love [a word which also means ‘mercy’] has no end” (Ps 136). God is always ready to hear the cry of the poor and come to relieve them in their distress. God is their rock, their shield, their fortress. As the Jewish scholar Abraham Heschel would have said: Israel’s God is not characterised by apathy, but by its opposite, pathos (passion) - by passionate concern for humanity, by intimate involvement in the life story of God’s people. The Exodus, the deliverance of Israel from slavery, is God’s loving, merciful response to his people in their time of dire distress. It is the paradigm and pattern of human need and divine deliverance: in that sense, it stands as a summary of the whole Bible. Inevitably, it calls for a response from God’s people: they too must be merciful, especially to the poor, to the marginalised, to widows and orphans who are otherwise without support.

“The face of the Father’s mercy” In the opening words of the official Bull that announced the Holy Year of Mercy, Pope Francis reminded us that “Jesus is the face of the Father’s mercy”;4 he is the revelation of what our God is really like; in him “the loving-kindness (the tender mercy) of the heart of our God…visits us” in person (Lk 1:78). And so the gospels offer overwhelming evidence of Jesus’s compassionate response to human suffering and need: he heals the sick, cleanses lepers, casts out devils, feeds the hungry, and touches the ‘unclean’ and allows them to touch him; he is moved to tears at the death of his friend; he even raises the dead to life. Just as one of the words used for mercy in the Old Testament is linked with the maternal womb, so one in the New Testament links it with a person’s innermost being; in each case there seems to be an attempt to express the inexpressible, the limitless depth of compassion with which God is moved by human need: the divine compassion is almost something physical. “I have set you an example” Jesus not only shows forth the mercy of God, he also urges his followers to do the same: “Show mercy,” he says, “just as your Father shows mercy” (Lk 6:36). On the night before he died he performed the lowly service which was normally left to a slave: he knelt and washed the dustcovered feet of his disciples. Then he told them: “…you also ought to wash one another’s feet. For I have set you

an example, that you should do as I have done to you” (Jn 13:14-15). We must not be like the wicked servant in the parable who, having been freed of an enormous debt by his generous master, then failed to show compassion to a fellow servant who owed him a paltry sum (Lk 7:4142). Similarly, the message of the famous parable of the Good Samaritan is that we are called upon to be good neighbours, compassionate neighbours, by coming to the aid of whoever stands in need of our help (Lk 10:30-35). Above all, in his majestic description of the Last Judgement Jesus makes it clear that our eternal fate is bound up with how we have helped, or failed to help, those in need. The ‘needs’ in questions are all of a bodily, corporal, nature: food and drink for the hungry and the thirsty; clothes and a home for those who are without them; visiting of those who are sick and those who are in prison; and burying of the dead. Jesus came not to save souls but to save people, and people are bodies as well as souls. And so while there are “Spiritual Works of Mercy” (see the companion CTS booklet of that title) there are also Corporal Works of Mercy, which are our particular concern here. The sheep and the goats Jesus says: “When the Son of Man comes in his glory and all the angels with him, then he will sit on the throne of his glory. All the nations will be gathered before him, and

or in prison, and did not take care of you?’ Then he will answer them, ‘Truly I tell you, just as you did not do it to one of the least of these, you did not do it to me.’ And these will go away into eternal punishment, but the righteous into eternal life” (Mt 25:31-46). St James, that most down-to-earth of men, sums it all up in a sentence: “there will be judgement without mercy for those who have not been merciful themselves; but the merciful need have no fear of judgement” (Jm 2:13).