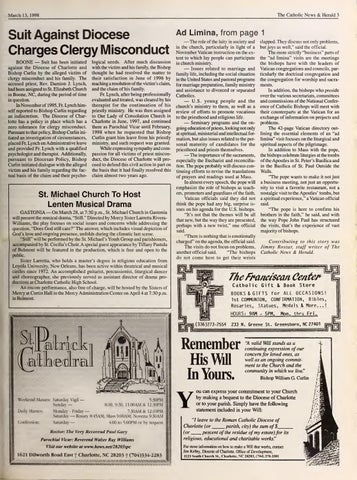 Ad Limina, from page — The of and

in the church, particularly in light of a

but joys as well,&quot; said the official.

Suit has been initiated

against the Diocese of Charlotte and Bishop Curlin by the alleged victim of clergy misconduct and his family. The accused priest, Rev. Damion J. Lynch, had been assigned to St. Elizabeth Church in Boone, NC, during the period of time in question.

Lynch himBishop Curlin regarding The Diocese of Charlotte has a policy in place which has a zero tolerance for clergy misconduct. Pursuant to that policy. Bishop Curlin iniself reported to

tiated an investigation of circumstances,

pursuant to Diocesan Policy, Bishop Curlin initiated dialogue with the alleged victim and his family regarding the factual basis of the claim and their psycho-

with the victim and his family, the Bishop

thought he had resolved the matter to their satisfaction in June of 1996 by reaching a resolution of the victim&#39;s claim, and the claim of his family. Fr. Lynch, after being professionally evaluated and treated, was cleared by his therapist for the continuation of his priestly ministry. He was then assigned to Our Lady of Consolation Church in Charlotte in June, 1997, and continued there as Parochial Vicar until February, 1998 when he requested that Bishop Curlin grant him leave from his priestly ministry, and such request was granted. While expressing sympathy and compassion for all victims of priest misconduct, the Diocese of Charlotte will pro-

this civil action in part

it had finally resolved claim almost two years ago.

the laity in society

which lay people can participate church ministry. Issues related to marriage and family life, including the social situation in the United States and pastoral programs for marriage preparation, family ministry and assistance to divorced or separated

the bishops have with the leaders of

U.S. young people and the

church&#39;s ministry to them, as well as a review of efforts to promote vocations to the priesthood and religious life. Seminary programs and the on-

going education of priests, looking not only at spiritual, ministerial

mation, but also issues related to the per-

sonal maturity of candidates for the priesthood and priests themselves.

especially the Eucharist and reconcilia-

tinuing efforts to revise the translations

ments. In addition, the bishops who preside over the various secretariats, committees and commissions of the National Conference of Catholic Bishops will meet with their counterparts at the Vatican for an exchange of information on projects and problems. The 42-page Vatican directory outlining the essential elements of an &quot;ad limina&quot; visit focuses on the liturgical and spiritual aspects of the pilgrimage. In addition to Mass with the pope, the bishops celebrate liturgies at the tombs of the Apostles in St. Peter&#39;s Basilica and in the Basilica of St. Paul Outside the Walls.

a business meeting, not just an opportu-

emphasize the role of bishops as teachers, promoters and guardians of the faith.

nity to visit a favorite restaurant, not a

Vatican officials said they did not

a spiritual experience,&quot; a Vatican official

nostalgic visit to the Apostles&#39; tombs, but

not that the themes will be

here to confirm his

brothers in the faith,&quot; he said, and with

new, but the way they are presented, perhaps with a new twist,&quot; one official

&quot;There is nothing that is emotionally charged&quot; on the agenda, the official said. The visits do not focus on problems, another official said. &quot;The bishops do not come here to get their wrists

the visits, that&#39;s the experience of vast

Contributing to this story was Rostar, staff writer of The

holds a master&#39;s degree in religious education from

New Orleans, has been active within theatrical and musical An accomplished guitarist, percussionist, liturgical dancer and choreographer, she previously served as assistant director of drama proLoyola University,

An encore performance, in

Curtin Hall in the

also free of charge, will be hosted

ment to the Church and community in which we

statement included in your Will:

&quot;/ leave to the

or to your parish. Simply have the foDowing

&quot;A valid Will stands as a continuing expression of our

concern for loved ones, as well as an ongoing commit-

the congregation for worship and sacra-

of prayers and readings used at Mass.

drama, &quot;Still.&quot; Directed by Mercy Sister Larretta RiveraWilliams, the play focuses on social issues and concerns while addressing the question, &quot;Does God still care?&quot; The answer, which includes visual depiction of God&#39;s love and ongoing presence, unfolds during the climatic last scene. &quot;Still&quot; will be performed by the St. Michael&#39;s Youth Group and parishioners, accompanied by St. Cecilia&#39;s Choir. A special guest appearance by Tiffany Pastula of Belmont will be featured in the production, which is free and open to the

sues on his agenda for the U.S. bishops. in

They discuss not only problems,

think the pope had any big, surprise

will present the musical

November Vatican instruction on the ex-

In almost every speech, the

percent of the residue of my estate) for

religious, educational For more information on