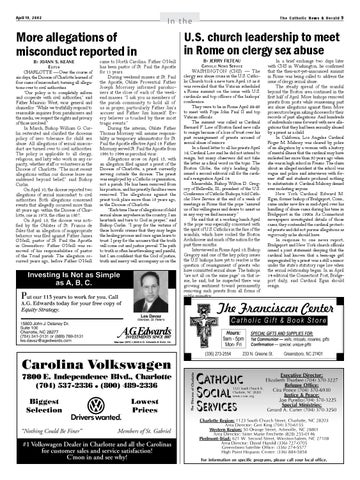 More allegations of misconduct reported in

By Joann S. Keane Editor CHARLOTTE — Over the course of six days, the Diocese of Charlotte learned of four cases of misconduct, turning all allegations over to civil authorities. “Our policy is to completely inform and cooperate with civil authorities,” said Father Mauricio West, vicar general and chancellor. “While we truthfully respond to reasonable inquiries from parishioners and the media, we respect the rights and privacy of those involved.” In March, Bishop William G. Curlin reiterated and clarified the diocesan policy of zero tolerance for child sex abuse. All allegations of sexual misconduct are turned over to civil authorities. The policy is applicable to all clergy, religious, and laity who work in any capacity, whether staff or volunteers in the Diocese of Charlotte. “The most recent allegations within our diocese leave me saddened beyond belief,” said Bishop Curlin. On April 10, the diocese reported two allegations of sexual misconduct to civil authorities. Both allegations concerned events that allegedly occurred more than 25 years ago within the Diocese of Charlotte, one in 1973, the other in 1957. On April 13, the diocese was notified by the Oblates of St. Francis de Sales that an allegation of inappropriate behavior was filed against Father James O’Neill, pastor of St. Paul the Apostle in Greensboro. Father O’Neill was removed of his responsibilities of pastor of the Triad parish. The allegation occurred years ago, before Father O’Neill

came to North Carolina. Father O’Neill has been pastor of St. Paul the Apostle for 11 years. During weekend masses at St. Paul the Apostle, Oblate Provential Father Joseph Morrissy informed parishioners at the close of each of the weekend masses. “I ask you as members of the parish community to hold all of us in prayer, particularly Father Jim’s accuser and Father Jim himself. Every believer is touched by these most tragic events.” During the interim, Oblate Father Thomas Morrissy will assume responsibility as temporary administrator for St. Paul the Apostle effective April 19. Father Morrissy served St. Paul the Apostle from 1991 to 1994 as parochial vicar. Allegations arose on April 15, with an allegation filed against a priest of the Diocese of Charlotte, a priest currently serving outside the diocese. The priest was employed by a Catholic organization, not a parish. He has been removed from his position, and his priestly faculties were removed. The allegations against the priest took place more than 15 years ago, in the Diocese of Charlotte. “Each time I hear of allegations of child sexual abuse anywhere in the country, I am heartsick and turn to God in prayer,” said Bishop Curlin. “I pray for the victims of these horrific crimes that they may begin the healing process and once again learn to trust. I pray for the accusers that the truth will come out and justice prevail. The path to truth is often heartbreaking and painful, but I am confident that the God of justice, truth and mercy will accompany us on the

By Jerry Filteau Catholic News Service WASHINGTON (CNS) — The clergy sex abuse crisis in the U.S. Catholic Church took a new turn April 15 as it was revealed that the Vatican scheduled a Rome summit on the issue with U.S. cardinals and top officers of the bishops’ conference. They were to be in Rome April 22-25 to meet with Pope John Paul II and top Vatican officials. The summit was called as Cardinal Bernard F. Law of Boston faced new calls to resign because of a loss of trust over his past reassignment of priests accused of sexual abuse of minors. In a faxed letter to all his priests April 12, Cardinal Law said he did not intend to resign, but many observers did not take the letter as a final word on the topic. The Boston Globe, the city’s leading daily, issued a second editorial call for the cardinal’s resignation April 14. Meanwhile, Bishop Wilton D. Gregory of Belleville, Ill., president of the U.S. Conference of Catholic Bishops, told Catholic New Service at the end of a week of meetings in Rome that the pope “assured us of his willingness and desire to assist us in any way we find necessary.” He said that at a working lunch April 9 the pope was especially concerned with the spirit of U.S. Catholics in the face of the scandals, which have rocked the Boston Archdiocese and much of the nation for the past three months. Interviewed in Rome April 13, Bishop Gregory said one of the key policy issues the U.S. bishops have yet to resolve is the question of reassignment of priests who have committed sexual abuse. The bishops “are not all on the same page” on that issue, he said, but he suspected there was growing sentiment toward permanently removing such priests from all forms of public ministry.

In a brief exchange two days later with CNS in Washington, he confirmed that the then-not-yet-announced summit in Rome was being called to address the issue of clergy sexual abuse. The steady spread of the scandal beyond the Boston area continued in the first half of April. More bishops removed priests from posts while reassessing past sex abuse allegations against them. More prosecutors began asking dioceses for their records of past allegations. And hundreds of individuals came forward with new allegations that they had been sexually abused by a priest as a child. In California, Los Angeles Cardinal Roger M. Mahony was cleared by police of an allegation by a woman with a history of mental illness that the cardinal may have molested her more than 30 years ago when she was in high school in Fresno. The claim about an alleged incident at the school was vague and police said interviews with former staff and students produced nothing to substantiate it. Cardinal Mahony denied ever molesting anyone. New York Cardinal Edward M. Egan, former bishop of Bridgeport, Conn., came under new fire in mid-April over his handling of abuse cases during his time in Bridgeport in the 1990s. As Connecticut newspapers investigated details of those cases, they contended the cardinal protected priests and did not pursue allegations as vigorously as he should have. In response to one news report, Bridgeport and New York church officials issued a joint statement denying that the cardinal had known that a teen-age girl impregnated by a priest was a still a minor under the state’s statutory rape law when the sexual relationship began. In an April 14 editorial the Connecticut Post, Bridgeport daily, said Cardinal Egan should resign.