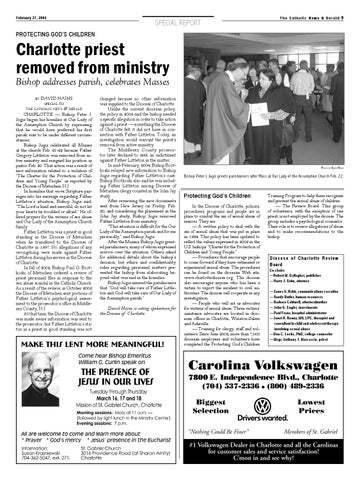 CHARLOTTE — Bishop Peter J. Jugis began his homilies at Our Lady of the Assumption Church by expressing that he would have preferred his first parish visit to be under different circumstances. Bishop Jugis celebrated all Masses at the church Feb. 21-22 because Father Gregory Littleton was removed from active ministry and resigned his position as pastor Feb. 20. That action was a result of new information related to a violation of “The Charter for the Protection of Children and Young People” as reported by the Diocese of Metuchen, N.J. In homilies that wove Scripture passages into his message regarding Father Littleton’s situation, Bishop Jugis said, “The Lord is kind and merciful, do not let your hearts be troubled or afraid.” He offered prayers for the victims of sex abuse and Our Lady of the Assumption Church family. Father Littleton was a priest in good standing in the Diocese of Metuchen when he transfered to the Diocese of Charlotte in 1997. No allegations of any wrongdoing were made against Father Littleton during his service in the Diocese of Charlotte. In fall of 2002, Bishop Paul G. Bootkoski of Metuchen ordered a review of priest personnel files in response to the sex abuse scandal in the Catholic Church. As a result of the review, in October 2002 the Diocese of Metuchen sent portions of Father Littleton’s psychological assessment to the prosecutor’s office in Middlesex County, N.J. At that time, the Diocese of Charlotte was made aware information was sent to the prosecutor, but Father Littleton’s status as a priest in good standing was not

changed because no other information was supplied to the Diocese of Charlotte. Unlike the current diocesan policy, the policy in 2002 said the bishop needed a specific allegation in order to take action against a priest — something the Diocese of Charlotte felt it did not have in connection with Father Littleton. Today, an investigation would warrant the priest’s removal from active ministry. The Middlesex County prosecutor later declined to seek an indictment against Father Littleton in the matter. In mid-February, 2004, Bishop Bootkoski relayed new information to Bishop Jugis regarding Father Littleton’s case. Bishop Bootkoski also said he was including Father Littleton among Diocese of Metuchen clergy counted in the John Jay study. After reviewing the new documents sent from New Jersey on Friday, Feb. 20, and considering the placement in the John Jay study, Bishop Jugis removed Father Littleton from ministry. “This situation is difficult for the Our Lady of the Assumption parish and for me personally,” said Bishop Jugis. After the Masses, Bishop Jugis greeted parishioners, many of whom expressed sorrow over the situation. Others asked for additional details about the bishop’s decision, but ethics and confidentiality rules regarding personnel matters prevented the bishop from elaborating beyond what was said in the homilies. Bishop Jugis assured the parishioners that “God will take care of Father Littleton and God will take care of Our Lady of the Assumption parish.” David Hains is acting spokesman for the Diocese of Charlotte.

Bishop Peter J. Jugis greets parishioners after Mass at Our Lady of the Assumption Church Feb. 22.

Protecting God’s Children In the Diocese of Charlotte, policies, procedures, programs and people are in place to combat the sin of sexual abuse of minors. They are: — A written policy to deal with the sin of sexual abuse that was put in place in 1994. This policy has been updated to reflect the values expressed in 2002 in the U.S. bishops’ “Charter for the Protection of Children and Young People.” — Procedures that encourage people to come forward if they have witnessed or experienced sexual abuse. The procedures can be found on the diocesan Web site, www.charlottediocese.org. The diocese also encourages anyone who has been a victim to report the incident to civil authorities. The diocese will cooperate in any investigation. — People who will act as advocates for victims of sexual abuse. Three victims’ assistance advocates are located in diocesan offices in Charlotte, Winston-Salem and Asheville. — Training for clergy, staff and volunteers. Since June 2002, more than 7,000 diocesan employees and volunteers have completed the Protecting God’s Children

Training Program to help them recognize and prevent the sexual abuse of children. — The Review Board. This group of volunteers, with the exception of one priest, is not employed by the diocese. The group includes a psychological counselor. Their role is to review allegations of abuse and to make recommendations to the bishop.