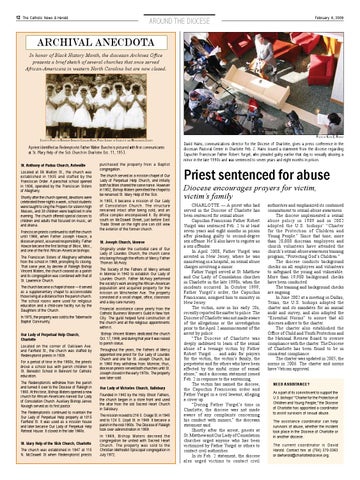 Archival Anecdota In honor of Black History Month, the diocesan Archives Office presents a brief sketch of several churches that once served African-Americans in western North Carolina but are now closed.

A priest identified as Redemptorist Father Walter Bueche is pictured with first communicants at St. Mary Help of the Sick Church in Charlotte Oct. 11, 1953. St. Anthony of Padua Church, Asheville Located at 56 Walton St., the church was established in 1935 and staffed by the Franciscan Order. A parochial school opened in 1936, operated by the Franciscan Sisters of Alleghany. Shortly after the church opened, devotions were celebrated three nights a week, school students were taught to sing the Propers for solemn high Masses, and 30 children were baptized in one evening. The church offered special classes to children and adults that focused on music, art and drama. Franciscan priests continued to staff the church until 1966, when Father Joseph Howze, a diocesan priest, assumed responsibility. Father Howze became the first bishop of Biloxi, Miss., and one of the first African-American bishops. The Franciscan Sisters of Alleghany withdrew from the school in 1969, prompting its closing. That same year, by decree of Raleigh Bishop Vincent Waters, the church ceased as a parish and its congregation was combined with that of St. Lawrence Church. The church became a chapel of ease — it served as a supplementary chapel to accommodate those living at a distance from the parish church. The school rooms were used for religious education and a child-care facility run by the Daughters of the Church.

purchased the property from a Baptist congregation. The church served as a mission chapel of Our Lady of Perpetual Help Church, and initially both facilities shared the same name. However in 1952, Bishop Waters permitted the chapel to be renamed St. Mary Help of the Sick. In 1955, it became a mission of Our Lady of Consolation Church. The structure remained intact after being sold, and an office complex encompassed it. By driving south on McDowell Street, just before East Trade Street on the right one can still view the exterior of the former church. St. Joseph Church, Monroe Originally under the custodial care of Our Lady of Lourdes Church, the church came into being through the efforts of Mercy Father Thomas McAvoy. The Society of the Fathers of Mercy arrived in Monroe in 1942 to establish Our Lady of Lourdes Church. Father McAvoy performed the society’s work among the African-American population and acquired property for the mission on Winchester Ave. The property consisted of a small chapel, office, classroom and a day care nursery.

In 1975, the property was sold to the Tabernacle Baptist Community.

Financial assistance came yearly from the Catholic Business Women’s Guild in New York City. The guild helped fund construction of the church and all the religious appointments within it.

Bishop Vincent Waters dedicated the church Oct. 17, 1948, and during that year it was raised to parish status.

Located on the corner of Oaklawn Ave. and Fairfield St., the church was staffed by Redemptorist priests in 1939. For a period of time in the 1950s, the priests drove a school bus with parish children to St. Benedict School in Belmont for Catholic education. The Redemptorists withdrew from the parish and turned it over to the Diocese of Raleigh in 1955. At this time, Bishop Waters opened a new church for African-Americans named Our Lady of Consolation Church. Auxiliary Bishop James Navagh served as its first pastor. The Redemptorists continued to maintain the Our Lady of Perpetual Help property at 1015 Fairfield St. It was used as a mission house and later became Our Lady of Perpetual Help Retreat House. It closed in the late 1960s. St. Mary Help of the Sick Church, Charlotte The church was established in 1947 at 115 N. McDowell St when Redemptorist priests

Throughout the years, the Fathers of Mercy appointed one priest for Our Lady of Lourdes Church and one for St. Joseph Church, but in 1960 they withdrew from Monroe; thus, diocesan priests served both churches until St. Joseph closed in the early 1970s. The property was later sold. Our Lady of Victories Church, Salisbury Founded in 1942 by the Holy Ghost Fathers, the church began in a store front and used the altar from the old Sacred Heart Church in Salisbury. The mission moved to 216 S. Craige St. in 1945 and to 124 S. Lloyd St. in 1949. It became a parish in the mid-1950s. The Diocese of Raleigh took over administration in 1959. In 1969, Bishop Waters decreed the congregation be united with Sacred Heart Church. The property was sold to the Christian Methodist Episcopal congregation in July 1972.

David Hains, communications director for the Diocese of Charlotte, gives a press conference in the diocesan Pastoral Center in Charlotte Feb. 2. Hains issued a statement from the diocese regarding Capuchin Franciscan Father Robert Yurgel, who pleaded guilty earlier that day to sexually abusing a minor in the late 1990s and was sentenced to seven years and eight months in prison.

Priest sentenced for abuse Diocese encourages prayers for victim, victim’s family CHARLOTTE — A priest who had served in the Diocese of Charlotte has been sentenced for sexual abuse. Capuchin Franciscan Father Robert Yurgel was sentenced Feb. 2 to at least seven years and eight months in prison after pleading guilty to second-degree sex offense. He’ll also have to register as a sex offender. In April 2008, Father Yurgel was arrested in New Jersey, where he was ministering in a hospital, on sexual abuse charges involving a minor. Father Yurgel served at St. Matthew and Our Lady of Consolation churches in Charlotte in the late 1990s, when the incidents occurred. In October 1999, Father Yurgel’s order, the Capuchin Franciscans, assigned him to ministry in New Jersey. The victim, now in his early 20s, recently reported the matter to police. The Diocese of Charlotte was not made aware of the allegations or the investigation prior to the April 2 announcement of the arrest by police. “The Diocese of Charlotte was deeply saddened to learn of the sexual abuse of a teenage victim by Father Robert Yurgel … and asks for prayers for the victim, the victim’s family, the perpetrator and for others who have been affected by the sinful crime of sexual abuse,” said a diocesan statement issued Feb. 2 in response to the sentencing. The victim has named the diocese, the Capuchin Franciscan order and Father Yurgel in a civil lawsuit, alleging a cover up. “During Father Yurgel’s time in Charlotte, the diocese was not made aware of any complaints concerning his conduct with minors,” the diocesan statement said. Shortly after the arrest, priests at St. Matthew and Our Lady of Consolation churches urged anyone who has been victimized by Father Yurgel or others to contact civil authorities. In its Feb. 2 statement, the diocese also urged victims to contact civil

authorities and emphasized its continued commitment to sexual-abuse awareness. The diocese implemented a sexual abuse policy in 1989 and in 2002 adopted the U.S. bishops’ “Charter for the Protection of Children and Young People.” Since that time, more than 20,000 diocesan employees and church volunteers have attended the church’s sexual-abuse awareness training program, “Protecting God’s Children.” The diocese conducts background checks on all employees and volunteers to safeguard the young and vulnerable. More than 19,900 background checks have been conducted. The training and background checks are ongoing. In June 2002 at a meeting in Dallas, Texas, the U.S. bishops adopted the charter and its mandates for an annual audit and survey, and also adopted the “Essential Norms” to assure that all dioceses adhere to the charter. The charter also established the Office of Child and Youth Protection and the National Review Board to oversee compliance with the charter. The Diocese of Charlotte has been found to be in consistent compliance. The charter was updated in 2005, the norms in 2006. The charter and norms have Vatican approval. NEED ASSISTANCE? As a part of its commitment to support the U.S. bishops’ “Charter for the Protection of Children and Young People,” the Diocese of Charlotte has appointed a coordinator to assist survivors of sexual abuse. The assistance coordinator can help survivors of abuse, whether the incident took place in the Diocese of Charlotte or in another diocese.  The current coordinator is David Harold. Contact him at (704) 370-3363 or dwharold@charlottediocese.org.