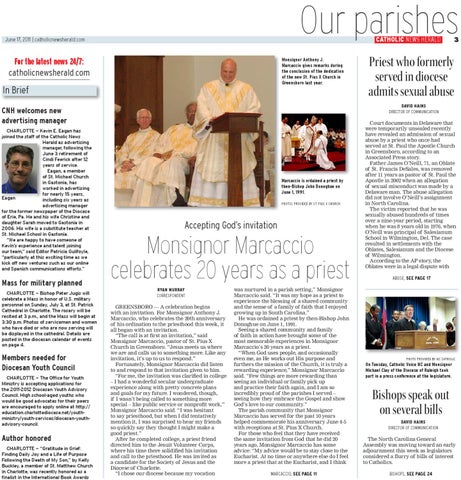 For the latest news 24/7: catholicnewsherald.com

Monsignor Anthony J. Marcaccio gives remarks during the conclusion of the dedication of the new St. Pius X Church in Greensboro last year.

Mass for military planned CHARLOTTE — Bishop Peter Jugis will celebrate a Mass in honor of U.S. military personnel on Sunday, July 3, at St. Patrick Cathedral in Charlotte. The rosary will be recited at 3 p.m., and the Mass will begin at 3:30 p.m. Photos of servicemen and women who have died or who are now serving will be displayed in the cathedral. Details are posted in the diocesan calendar of events on page 4.

Members needed for Diocesan Youth Council CHARLOTTE — The Office for Youth Ministry is accepting applications for the 2011-2012 Diocesan Youth Advisory Council. High school-aged youths who would be good advocates for their peers are encouraged to apply online at http:// education.charlottediocese.net/youthministry/youth-services/diocesan-youthadvisory-council.

Author honored CHARLOTTE — “Gratitude in Grief: Finding Daily Joy and a Life of Purpose Following the Death of My Son,” by Kelly Buckley, a member of St. Matthew Church in Charlotte, was recently honored as a finalist in the International Book Awards

CNH welcomes new advertising manager CHARLOTTE — Kevin E. Eagan has joined the staff of the Catholic News Herald as advertising manager, following the June 3 retirement of Cindi Feerick after 12 years of service. Eagan, a member of St. Michael Church in Gastonia, has worked in advertising for nearly 15 years, Eagan including six years as advertising manager for the former newspaper of the Diocese of Erie, Pa. He and his wife Christine and daughter Sarah moved to Gastonia in 2006. His wife is a substitute teacher at St. Michael School in Gastonia. “We are happy to have someone of Kevin’s experience and talent joining our team,” said Editor Patricia Guilfoyle, “particularly at this exciting time as we kick off new ventures such as our online and Spanish communications efforts.”

GREENSBORO — A celebration begins with an invitation. For Monsignor Anthony J. Marcaccio, who celebrates the 20th anniversary of his ordination to the priesthood this week, it all began with an invitation. “The call is at first an invitation,” said Monsignor Marcaccio, pastor of St. Pius X Church in Greensboro. “Jesus meets us where we are and calls us to something more. Like any invitation, it’s up to us to respond.” Fortunately, Monsignor Marcaccio did listen to and respond to that invitation given to him. “For me, the invitation was clarified in college – I had a wonderful secular undergraduate experience along with pretty concrete plans and goals for my future. I wondered, though, if I wasn’t being called to something more special – like public service or nonprofit work,” Monsignor Marcaccio said. “I was hesitant to say priesthood, but when I did tentatively mention it, I was surprised to hear my friends so quickly say they thought I might make a good priest.” After he completed college, a priest friend directed him to the Jesuit Volunteer Corps, where his time there solidified his invitation and call to the priesthood. He was invited as a candidate for the Society of Jesus and the Diocese of Charlotte. “I chose our diocese because my vocation

was nurtured in a parish setting,” Monsignor Marcaccio said. “It was my hope as a priest to experience the blessing of a shared community and the sense of a family of faith that I enjoyed growing up in South Carolina.” He was ordained a priest by then-Bishop John Donoghue on June 1, 1991. Seeing a shared community and family of faith in action have brought some of the most memorable experiences in Monsignor Marcaccio’s 20 years as a priest. “When God uses people, and occasionally even me, as He works out His purpose and furthers the mission of the Church, it is truly a rewarding experience,” Monsignor Marcaccio said. “Few things are more rewarding than seeing an individual or family pick up and practice their faith again, and I am so incredibly proud of the parishes I served – seeing how they embrace the Gospel and show God’s love to our community.” The parish community that Monsignor Marcaccio has served for the past 10 years helped commemorate his anniversary June 4-5 with receptions at St. Pius X Church. For those who feel that they have received the same invitation from God that he did 20 years ago, Monsignor Marcaccio has some advice: “My advice would be to stay close to the Eucharist. At no time or anywhere else do I feel more a priest that at the Eucharist, and I think Marcaccio, SEE page 11

Court documents in Delaware that were temporarily unsealed recently have revealed an admission of sexual abuse by a priest who once had served at St. Paul the Apostle Church in Greensboro, according to an Associated Press story. Father James O’Neill, 71, an Oblate of St. Francis DeSales, was removed after 11 years as pastor of St. Paul the Apostle in 2002 when an allegation of sexual misconduct was made by a Delaware man. The abuse allegation did not involve O’Neill’s assignment in North Carolina. The victim reported that he was sexually abused hundreds of times over a nine-year period, starting when he was 8 years old in 1976, when O’Neill was principal of Salesianum School in Wilmington, Del. The case resulted in settlements with the Oblates, Salesianum and the Diocese of Wilmington. According to the AP story, the Oblates were in a legal dispute with Abuse, SEE page 17

On Tuesday, Catholic Voice NC and Monsignor Michael Clay of the Diocese of Raleigh took part in a press conference at the legislature.

The North Carolina General Assembly was moving toward an early adjournment this week as legislators considered a flurry of bills of interest to Catholics. BISHOPS, SEE page 24