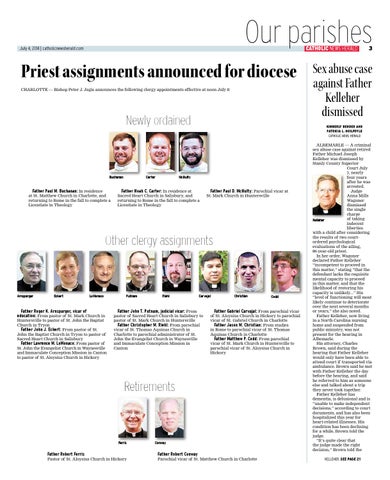 Father Paul M. Buchanan: In residence at St. Matthew Church in Charlotte, and returning to Rome in the fall to complete a Licentiate in Theology

Father Noah C. Carter: In residence at Sacred Heart Church in Salisbury, and returning to Rome in the fall to complete a Licentiate in Theology

ALBEMARLE — A criminal sex abuse case against retired Father Michael Joseph Kelleher was dismissed by Stanly County Superior Court July 1, nearly four years after he was arrested. Judge Anna Mills Wagoner dismissed the single charge of taking Kelleher indecent liberties with a child after considering the results of two courtordered psychological evaluations of the ailing, 86-year-old priest. In her order, Wagoner declared Father Kelleher “incompetent to proceed in this matter,” stating “that the defendant lacks the requisite mental capacity to proceed in this matter, and that the likelihood of restoring his capacity is unlikely...” His “level of functioning will most likely continue to deteriorate over the next several months or years,” she also noted. Father Kelleher, now living in a North Carolina nursing home and suspended from public ministry, was not present for the hearing in Albemarle. His attorney, Charles Brown, said during the hearing that Father Kelleher would only have been able to attend court if transported via ambulance. Brown said he met with Father Kelleher the day before the hearing, and said he referred to him as someone else and talked about a trip they never took together. Father Kelleher has dementia, is delusional and is “unable to make independent decisions,” according to court documents, and has also been hospitalized this year for heart-related illnesses. His condition has been declining for a while, Brown told the judge. “It’s quite clear that the judge made the right decision,” Brown told the KELLEHER, SEE page 21