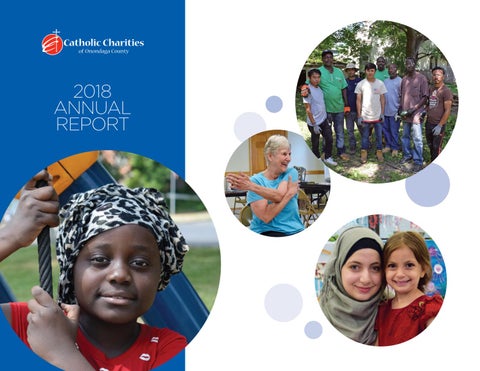 Table of Contents A Message from our Executive Director

A Message from our Chief Development Officer

A Legacy of Generosity

Board of Directors and Executive Staff

Dear Friends, A life lived in poverty is a life lived in chaos. It can be impossible to find your footing. A parent in poverty might be too preoccupied with obtaining medicine to search for a job. A child might be too hungry to pay attention in school. This is perhaps the cruelest thing about poverty – it traps people in a frantic cycle that makes forward progress nearly impossible. Catholic Charities of Onondaga County is committed to breaking that cycle. With the help of our supporters, we’re able to create space for our clients to gather themselves and make plans for the future. We alleviate crises by filling pantries and finding housing. We create stability by

A Message from our Executive Director

coordinating health care and community support. Finally, we work with the people we serve to build their capacity for success. This includes both preparing them for self-sufficiency and connecting them with opportunities. When you give to our agency, you reduce poverty in Onondaga County. You let your neighbors know that you see them and that you care. I’m proud of what we accomplished together in 2018 and look forward to continuing to partner with you to create hope in our community. Sincerely,

meals served to children and adults

Crisis Programs Syracuse is one of the top ten poorest cities in the United States (U.S. Census Bureau). Over 30% of people in the city of Syracuse live in poverty, as do many throughout the county. That means our supporters reach the people most in need, not just in Onondaga County, but in the entire country. Our Crisis Services are intimately familiar with the realities of poverty. Our food pantry, located in the heart of Downtown Syracuse, provides bags of food for up to 40 families every Tuesday, Wednesday, and Thursday. Every day, our case workers find housing for people who are in danger of becoming homeless. Our Crisis Programs help families keep the lights on, stay connected to water, and afford vital medications. When these necessities are taken care of, our clients can better turn their attention to childcare, employment, and other needs.

Every winter, Catholic Charities staff combines efforts with partner organizations for the Point in Time count to get an account of people without shelter.

people housed in our shelters

PROGRAM HIGHLIGHT Mental and physical health are critical issues for people who are homeless. In 2018, our Menâ&amp;#x20AC;&amp;#x2122;s Shelter secured an Innovation Grant through the CNY Care Collaborative to bring better medical care to the shelterâ&amp;#x20AC;&amp;#x2122;s residents. With this grant, we were able to bring on a part-time psycho-social therapist, a part-time psychiatrist, and a full-time nurse practitioner. Over the course of the year, they saw more than 350 clients. The medical support was credited with a decrease in incidents and emergency room visits in 2018.

Stability Programs Our Stability Programs include Supportive Housing, Health Care Management, Elderly Services, and Refugee Resettlement. These programs make it possible for people to feel secure in their homes and community and confident in their access to health care. In 2018, our Health Care Management programs expanded significantly, enabling us to reach an additional 413 people in need. Our Refugee Resettlement programs welcomed newcomers and supported individuals and families as they adjust to life in Syracuse. Across our agency, programs work together to support the success of individuals and families. We walk with clients as they navigate their path out of poverty, connecting them to different programs as their needs change. Our stability programs exist to help people recover from a state of crisis and reduce the chaos that interferes with their ability to be part of the community. We meet people where they are and work with them to determine the best course for themselves and their families.

veterans in danger of homelessness were housed

PROGRAM HIGHLIGHT In 2018, our CYO Refugee Services secured an important grant from U.S. Citizenship and Immigration Services. The grant provided funds for classes that prepare newlyarrived refugees for the process and tests to become an American citizen. More instructors, classes, and technology were added to the program. As one of only a handful of sites in the country to receive such funding, our CYO is playing an important role in supporting the refugee community.

At right, staff member Kate Holmes reviews family portraits with a New American family. For many people who arrived in Syracuse as refugees, holiday portraits taken at the CYO are a family first.

Capacity Building Programs Children who are born into generational poverty face significant hurdles to success. They may come from a family that suffered significant trauma and struggles. Parents could be ill-equipped to help their children succeed. If these disadvantages aren’t addressed when a child is young, they compound as they grow. Our Capacity Building programs are designed to help children and adults overcome these barriers and transform their lives. These programs include our parenting programs, Lullaby League, after-school programs, pre-k classes, counseling, social ventures, and more. In 2018, our social ventures, which are consolidated under the independent LLC “Dignity Works,” hired a General Manager to coordinate programming and reach more customers. In 2018, Culinary Arts for Self-Sufficiency (CASS) students

found employment with many local businesses, including Upstate Medical University, the Marriott Syracuse Downtown, Syracuse University, Embassy Suites, Key Bank, and more. Project Joseph’s team had as many as 24 employees at a time, all of whom are current or former clients. Through our Capacity Building programs, the people we serve grow in independence. They are better positioned to care for themselves, their families, and their communities. We’re proud to work with our clients to reduce poverty in Syracuse.

PROGRAM HIGHLIGHT â&amp;#x20AC;&amp;#x201C; PRE-K Education has a huge impact on a childâ&amp;#x20AC;&amp;#x2122;s life. In 2018, our Pre-K classes taught over 300 children in under-served neighborhoods in Syracuse. We added three licensed sites which included opportunities for full-day programs for three-year-olds. Our classes focus on preparing children for kindergarten, giving them skills that serve as building blocks for later educational success.

Salt City Shaker The Mover and Shaker award, which is presented at the Salt City Shaker in October, recognizes a young professional who is making a difference in our community. On October 18, 2018, we presented the award to Maria Maldonado Lewis. Maria, whose family participated in Catholic Charities programs when she was young, is the Constituent Services Advocate for the Mayor’s Office.

Dear Friends, Another year has passed at Catholic Charities of Onondaga County and the pages in our Annual Report represent the many journeys we have traveled in the past year. This report shares the journeys of: • our clients during their toughest days, • our staff as we find the means to help every individual who passes through our doors, • our community partners who ensure that we are well-connected, educated, and using every resource available so that we are able to transform the lives of our neighbors who are most in need. We are here for our clients because you are here for us. You make these lifechanging moments possible. Our daily work is a direct result of the gifts we receive throughout the year. Whether you give a one-time gift, a monthly donation, are a member of our 1923 Society, respond to our appeals, attend an event, or volunteer in our programs, you are making a difference. Your gifts allow us to meet people where they are and become part of their journey as they move toward self-sufficiency. On behalf of the Catholic Charities of Onondaga County board and staff, and each of our clients, I thank you for sharing your generosity with us throughout the past year. Thank you for taking this important journey with us. Please continue to stay in touch by following us on Facebook, visiting our website at www.ccoc.us, and joining us at our annual House of Providence Dinner and Salt City Shaker events. There is no richer gift than transforming the lives of those we serve. Be assured that your donations allow this to happen each and every day at Catholic Charities. With heartfelt gratitude, Denise Headd Chief Development Officer

DAVID FURMAN lived a life of quiet compassion. One of his final acts of kindness will benefit thousands of people in need.

of Onondaga County with a financial contribution during the period of January 1, 2018 to December 31, 2018. Donors are listed

compassionate man who had many friends.” David was a Eucharistic minister in the church and to those who were sick. According to Fr. Ryan, David was a humble man with a deep concern for others. He preferred to stay in the background, but always offered help when needed. One of the ways David helped others was by supporting charities throughout Central New York. He wanted to make sure that he gave back to his community. David once spoke to a member of our Development staff to learn more about our programs and said he knew that Catholic Charities had greater need of his money than he did. Predeceased by his parents and brother, David passed away quietly at home on June 28, 2018, after a battle with cancer. Several months later, his lawyer contacted our agency to notify us that David had included the agency in his final estate plans. His bequest reflected the depth of his concern and care for others, and was one of the largest we have received from an individual in a decade. We are deeply grateful to David and to all donors who so generously help us to be here for those who are most in need.

all individuals and organizations that supported Catholic Charities

David passed away in June, 2018. For years, he had been of Immaculate Conception spoke of David as “a kind and

The Honor Roll of Donors acknowledges the cumulative giving of

Thank you to all donors who give generously to our Vincent House Neighborhood Center through the Skaneateles Vincent House Guild. Your special commitment to the center has brightened summers for countless children and youth on the Near Westside. You have our deepest gratitude.

In-Kind Donors Catholic Charities of Onondaga County would like to thank the multitude of in-kind donors who generously gave food, clothing, and many other needed items. Without you, our programs would not have the resources to serve nearly 20,000 people every year. Your thoughtful generosity is deeply appreciated.

Board of Directors and Executive Staff

Credit card gifts can be made on our secure site 24 hours a day, seven days a week at www.ccoc. us/giving/. Recurring giving (scheduled monthly, quarterly or semi-annually) provides a special opportunity to give sustaining support.

Checks made payable to Catholic Charities of Onondaga County may be sent to: 1654 W. Onondaga Street, Syracuse, NY 13204

Gifts and pledges can be paid over the phone at 315-362-7579 or by credit card. Annual pledges can also be paid through a quarterly or monthly payment program established by the donor.

Make an enduring gift to Catholic Charities of Onondaga County by including us in your estate plan or will. Please consult your legal counsel or call us at 315-362-7528 to learn more.

Volunteer Provide critically needed volunteer support! Our wide range of programs provides many different opportunities for volunteers. To find the right opportunity for you, contact us at 315-362-7652 or volunteer@ccoc.us.