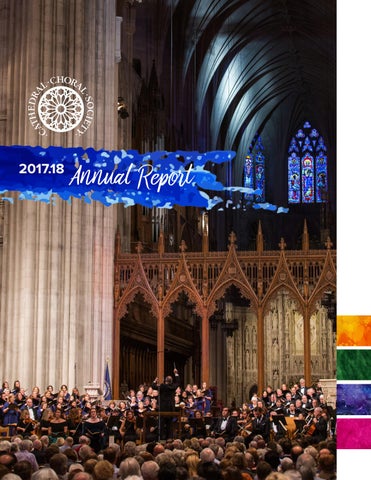 THE CATHEDRAL CHORAL SOCIETY WELCOMES AND ENGAGES SINGERS AND AUDIENCES OF ALL AGES, CULTURAL BACKGROUNDS, AND BELIEFS THROUGH INSPIRING PERFORMANCES, EXCELLENCE IN CHORAL SINGING, AND COLLABORATIVE SCHOOL INITIATIVES.

Thank You to Our Supporters

REPORT Greetings, I am pleased to share our 2017.18 Annual Report with you. This report gives us a chance to share an update on the artistic and financial health of our organization. It also provides us an opportunity to recognize and thank the many donors, supporters, and members who strengthen and sustain this chorus. The 2017.18 season was an exciting year of growth for the Cathedral Choral Society. We concluded our search for the third Music Director in the history of our organization. In November 2017, we announced Steven Fox as Music Director Designate. He began work with us in January 2018, and it has been a joy to introduce Steven to our community of singers, donors, and audience members. During this transition period, we were fortunate to continue our work with excellent guest conductors. We are grateful for their leadership, which offered our chorus the opportunity to experience different styles and grow musically. Our thanks to Kent Tritle, Betsy Burleigh, Donald Nally, and Lawrence Loh, as well as Thea Kano for serving as our Guest Festival Director for our annual DC High School Choir Festival. The 2017.18 season was a particularly strong year for us in audience development. Our opening concert, Mozart Requiem, sold out. We had a fantastic Joy of Christmas weekend, performing three concerts to full crowds. Altogether, the 2017.18 season represented our best ticket sales in eleven years. It was a pleasure to welcome so many new audience members to the Cathedral, and we look forward to continued success as we enter a new artistic era. This annual report looks back on the achievements of the past season and shares our strategic direction and vision for the future. As always, thank you for your important and ongoing support.

HIGHLIGHTS The 2017.18 season was a year of transition, as we both announced the organization’s new Music Director and had the opportunity to continue our work with guest conductors to conclude the season.

glad to premiere a new carol by composer Paul Mealor, who attended the concerts. We were led by guest conductor Betsy Burleigh, who chairs the choral department at Indiana University.

Our opening concert on Sunday, October 15 was MOZART REQUIEM. The program featured this favorite classic, as well as Morten Lauridsen’s gorgeous Lux Aeterna. Kent Tritle, Director of Music at the Cathedral of St. John the Divine in New York City, led the concert.

Our March concert, SOLITUDE AND JOY, was a contemplative, awe-invoking concert. Guest conductor Donald Nally, of Philadelphia’s The Crossing, created a program inspired by a lyrical quote by writer Pascal Quignard. The selections were entirely from 20th and 21st century composers, including two new works by Alex Berko and Ēriks Ešenvalds. Cellist Thomas Mesa and organist Scott Dettra joined the chorus.

This season was our 41 year of our beloved JOY OF CHRISTMAS concerts. We welcomed guest ensembles Lyric Brass Quintet and Washington Latin Public Charter School Honors Choir. We were st

Commissions for new works for chorus

In May, we concluded the season with a very special program in honor of composer and conductor Leonard Bernstein in his centennial year with BERNSTEIN: ODE TO FREEDOM. Guest conductor Lawrence Loh led a program that connected to Bernstein’s life as a humanitarian. Notably, we celebrated Bernstein’s 1973 “A Concert for Peace” at Washington National Cathedral by featuring the same piece performed at that concert: Haydn’s Mass in Time of War. One audience member wrote: “Every piece of music was performed beautifully. The concert really brought Bernstein to life...The reenactment of the ringing of the church bells was incredible. At the end of Haydn’s Mass the entire audience was silent and not one person clapped while waiting for the bells to ring. It was as if we were in 1973 all over again. Nothing short of magic.”

STRATEGIC GOAL: To create concert experiences that are engaging and relevant for today.

STRATEGIC GOAL: To inspire and support singing in schools.

The Cathedral Choral Society is one of ten symphonic choruses across the United States with annual budgets in excess of $1 million. It is the oldest symphonic choral group in Washington, DC. It is the primary performing arts organization in residence at Washington National Cathedral. Our audience comes from all across the region, all fifty states, and around the world.

Our endowment funds are held with Morgan Stanley. Our Board Investment Committee meets with our investment managers regularly to review the existing portfolio and determine if adjustments are needed to the organizationâ&#x20AC;&#x2122;s investment policy. As of June 30, 2018 the value of our overall endowment is $1,510,269.

Currently our funding priority is for ongoing annual support of our operations. This is followed closely by our need to grow general endowment support to ensure that contributed funds are available to support our work today and in the future.

STRATEGIC GOAL: To maintain long-term financial sustainability. If you would like to receive a copy of our audited financial statements or you have any questions about this financial overview of the Cathedral Choral Society, please contact Lindsay Sheridan at lsheridan@cathedral.org / 202-537-5524.

THANK YOU TO OUR

Thank you TO OUR GALA SPONSORS

In November 2017, the Cathedral Choral Society was pleased to announced Steven Fox as its third Music Director. Steven began work with the organization in January 2018, and his conducting premiere is the 2018.19 season. Steven is the Artistic Director of The Clarion Orchestra and The Clarion Choir, and Founder of Musica Antiqua St. Petersburg, which he established as Russia’s first period-instrument orchestra. A 2017 GRAMMY® nominee, he has appeared as a guest conductor with many renowned ensembles including Philharmonia Baroque Orchestra in San Francisco, Handel and Haydn Society in Boston, the Charleston Symphony Orchestra, the Quebec Symphony Orchestra, l’Opéra de Québec, and Music of the Baroque in Chicago. Steven has been called “an esteemed director” by The New Yorker and “visionary” by BBC Music Magazine.