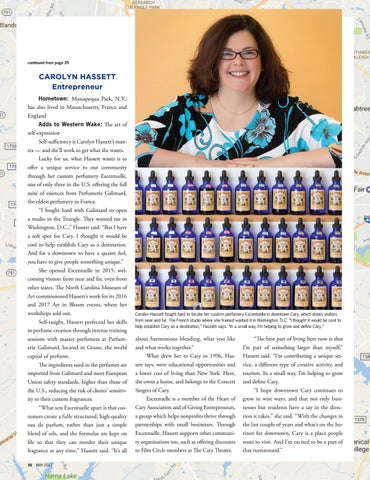 has also lived in Massachusetts, France and England Adds to Western Wake: The art of self-expression Self-sufficiency is Carolyn Hassett’s mantra — and she’ll work to get what she wants. Lucky for us, what Hassett wants is to offer a unique service to our community through her custom perfumery Escentuelle, one of only three in the U.S. offering the full suite of essences from Parfumerie Galimard, the oldest perfumery in France. “I fought hard with Galimard to open a studio in the Triangle. They wanted me in Washington, D.C.,” Hassett said. “But I have a soft spot for Cary. I thought it would be cool to help establish Cary as a destination. And for a downtown to have a quaint feel, you have to give people something unique.” She opened Escentuelle in 2015, welcoming visitors from near and far, even from other states. The North Carolina Museum of Art commissioned Hassett’s work for its 2016 and 2017 Art in Bloom events, where her workshops sold out. Self-taught, Hassett perfected her skills in perfume creation through intense training sessions with master perfumers at Parfumerie Galimard, located in Grasse, the world capital of perfume. The ingredients used in the perfumes are imported from Galimard and meet European Union safety standards, higher than those of the U.S., reducing the risk of clients’ sensitivity to their custom fragrances. “What sets Escentuelle apart is that customers create a fully structured, high-quality eau de parfum, rather than just a simple blend of oils, and the formulas are kept on file so that they can reorder their unique fragrance at any time,” Hassett said. “It’s all 36

Carolyn Hassett fought hard to locate her custom perfumery Escentuelle in downtown Cary, which draws visitors from near and far. The French studio where she trained wanted it in Washington, D.C. “I thought it would be cool to help establish Cary as a destination,” Hassett says. “In a small way, I’m helping to grow and define Cary.”

about harmonious blending, what you like and what works together.” What drew her to Cary in 1996, Hassett says, were educational opportunities and a lower cost of living than New York. Here, she owns a home, and belongs to the Concert Singers of Cary. Escentuelle is a member of the Heart of Cary Association and of Giving Entrepreneurs, a group which helps nonprofits thrive through partnerships with small businesses. Through Escentuelle, Hassett supports other community organizations too, such as offering discounts to Film Circle members at The Cary Theater.

“The best part of living here now is that I’m part of something larger than myself,” Hassett said. “I’m contributing a unique service, a different type of creative activity, and tourism. In a small way, I’m helping to grow and define Cary. “I hope downtown Cary continues to grow in wise ways, and that not only businesses but residents have a say in the direction it takes,” she said. “With the changes in the last couple of years and what’s on the horizon for downtown, Cary is a place people want to visit. And I’m excited to be a part of that turnaround.”

Our 5 Star Favorites, spring fashion, a guide to the local real estate market, and lots of fun family activities. 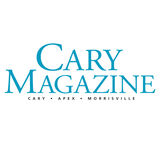