Fred and Ginger put their heads together for the first time to &quot;Carioca.” They are the sparkly comedy couple mirroring the conventional romance, between buff blond bandleader Gene Raymond and orchidaceous Dolores Del Rio. There are gratuitous flying scenes (including the finale, where high-kicking, high-heeled chorines are fastened onto airplane wings for the nutty title song) since the producer was a major Pan-American Airlines stockholder. Enjoy Pre-Code staples like racy songs (and racier dance numbers) gratuitous undressing scenes (although this time with the hero and not the heroine) and double-entendre dialogue. Diversity triumphs before stereotyping is imposed by the Code.

DIRECTED BY FRANK URSON (OR MAYBE CECIL B. DE MILLE)

what is the moviediva film series?

Those of you who know me from my twenty years as Film Curator at the North Carolina Museum of Art, or, from my monthly WUNC Radio appearances on The State of Things with Frank Stasio and Marsha Gordon, have an inkling about my taste, already. Last year, I programmed a Pre-Code series, and I just can’t get enough of the tough talking dames, determined shop girls and louche socialites of these films made from 1930-1934, before censorship was strictly enforced. Included with some of my personal Pre-Code essentials this time around is the silent film Chicago (source of the Bob Fosse musical), a skin crawling body horror sci-fi tale and a stunning rediscovery direct from the Museum of Modern Art.

All screenings at 7pm on Wednesdays

6/17: FLYING DOWN TO RIO DIRECTED BY THORNTON FREELAND

TICKETS $7 All screenings at 7pm on Wednesdays For more information go to:

Box factory girl Crawford trades on her allure to sleep her way into Gable’s Manhattan penthouse, but when he runs for governor, her days as his kept woman are numbered. Surprisingly frank about the one commodity beauty has to offer in the Depression marketplace, filming this ragsto-riches saga sparked a torrid affair between the stars. Possessed was the most “brazen” of the fallen women films, because of Marion’s lack of punishment for her sins. Crawford’s popularity with young female fans was considered downright dangerous, as Marion yearns for freedom outside of rigidly defined class and gender roles. Her drab factory town pales beside the glittering towers of a gloriously designed Art Deco urban paradise. Is it even a choice?

Naughty Roxie Hart shoots her lover down in the original silent version of the Bob Fosse musical, Oscar’s 2002 Best Picture. This spicy Roaring 20s exposé stars flirtatious comedienne Phyllis Haver. Maurine Watkins, a Chicago Tribune newshound, based her play, Chicago, on her reporting; articles so amusing and persuasive two probable murderesses went free. One profiled a tawdry cabaret singer who had evidently shot her lover dead in an automobile, “I liked him and he loved me—but no woman can love a man enough to kill him, because there are always plenty more.” Her only defense was that she was drunk. “Gin and guns, either one is bad enough, but together they get you in a dickens of a mess, don’t they?”

Berkeley’s dazzling masterpiece stars Cagney, whose electric tap dancing stunned moviegoers who knew him only as a nervy tough guy. He’s caught between the conniving Claire Dodd and sweet and tart Joan Blondell as he struggles with his unruly dance company. The wisp of a plot charts the brief vogue for staged prologues before new-fangled talking pictures, and concludes with three massive production numbers of sharply escalating nuttiness. “Honeymoon Hotel,” an ode to marital sex, “Shanghai Lil” a tribute to that girl in every port, then, “the most staggering water ballet in the history of liquid…neither taste nor logic was a factor by any means in this interminable series of simpering half-naked women…gamboling through an astounding variety of aquacade formations” (Richard Barrios).

Olga, an ex-gun moll on the lam, dons mechanic’s overalls to run a Mohave Desert gas station, shielding her wild kid sister from the abusive men she knows too well. This Western noir, banned by the Legion of Decency, is a completely woman-centered film, with men existing only as background, something rarely seen, even today. One Pre-Code aspect of the film is its non-stereotypical treatment of minorities. The travelling Mexican family is viewed respectfully, and the character who disdains them is treated with contempt for her racism. There were fewer such scenes after mid-1934, along with the intimations of illicit sex, unpunished murders and searches for the bathroom. These hard-scrabble siblings (along with gold diggers Glenda Farrell and Ruth Donnelly) are the real deal.

A delusional surgeon with a god complex creates a race of half-human beasts using ghastly surgical techniques in his House of Pain. Adapted from an 1896 novel by H. G. Wells, this gruesome horror film was banned in twelve countries for its religious sacrilege, as well as deviant sexuality. Laughton is a sadist, a white suited colonial terrorist, cracking a whip over his domain. The film begs that we feel compassion for the nonhuman, partly human and other outsiders who never asked for their fate, and sows dangerous ideas of cross-species mating and political rebellion. Shadowy cinematography, hideous make-up and a chilling performance by Bela Lugosi as the Sayer of the Law will haunt your nightmares.

The Divine Garbo plays the Swedish Queen Christina, (1626-1689) raised like a boy and, at the age of six crowned King of Sweden. In spite of her fondness for a lady in waiting (and one of the few same sex kisses in classic Hollywood), she falls in love with the Spanish envoy, played by Garbo’s former fiancé, John Gilbert, his wrecked silent film career briefly revived. Garbo revels in her character’s love of country and her androgyny, as Christina insists, “I shall die a bachelor.” “Queen Christina is smart, sophisticated, brazenly funny, and altogether uncategorizable…in a movie theater, in a nice, lush theater with a willing crowd, it is one of the best experiences you will ever have” (Pre-Code.com).

Edward G. Robinson’s tabloid editor has a crisis of conscience when his publisher demands he resurrect a 20-year old sex and murder scandal as a circulation stunt. His self-loathing battles his cynicism after he sends a failed divinity student (played by Boris Karloff one of his last roles before Frankenstein) to callously wreck the lives of a happy family. Like internet trolls, the paper’s staff is confident in their anonymity, until a tragedy forces them to face their sins. Warner Brothers’ brash social issue films shared a fast-talking energy with their gangster movies. Five Star Final is anchored by Robinson’s simmering fury and his electrifying confrontation with a wronged victim, played by starlet Marian Marsh.

Like a Grand Hotel on shipboard, the intertwining stories of a gentleman thief, a lily-livered banker, and the women who love them are told in Oscar-winning Art Deco splendor. This cross-section of society in a high seas mystery has remarkable visual sophistication, with its long tracking shots and dramatic deep focus cinematography by James Wong Howe. The stylish shoot-out in the ship’s boiler room stylistically anticipates both Citizen Kane and film noir. Thought lost forever in a 1937 vault fire at 20th Century Fox, the Museum of Modern Art has recently restored this major rediscovery.

A ruthless department store executive imposes his “smash or be smashed” credo on his Depression-panicked workforce. Sexual harassment is common currency and a little homoerotic subtext links the lives of a striving young couple with their fanatical workaholic boss. Many films in the 1920s and 30s were set in a department store, a retail fantasyland where any poor schmo could get a job and work up the ladder of success. Warren William stars, he “appeared in film after film as an electrifying if caddish professional whose mean exterior concealed a meaner interior” (Thomas Doherty). His power is not wealth or social status, but his unassailable ability to hire and fire.

What is the Moviediva film series? Those of you who know me from my twenty years as Film Curator at the North Carolina Museum of Art, or, from my monthly WUNC Radio appearances on The State of Things with Frank Stasio and Marsha Gordon, have an inkling about my taste, already. Last year, I programmed a Pre-Code series, and I just can’t get enough of the tough talking dames, determined shop girls and louche socialites of these films made from 1930-1934, before censorship was strictly enforced. Included with some of my personal Pre-Code essentials this time around is the silent film Chicago (source of the Bob Fosse musical), a skin crawling body horror sci-fi tale and a stunning rediscovery direct from the Museum of Modern Art. – Laura Boyes Curator, Moviediva Film Series 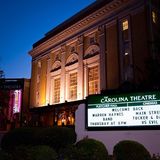