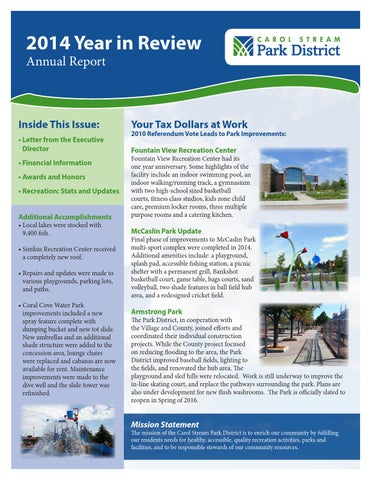 Your Tax Dollars at Work

• Letter from the Executive Director

• Simkus Recreation Center received a completely new roof. • Repairs and updates were made to various playgrounds, parking lots, and paths. • Coral Cove Water Park improvements included a new spray feature complete with dumping bucket and new tot slide. New umbrellas and an additional shade structure were added to the concession area, lounge chairs were replaced and cabanas are now available for rent. Maintenance improvements were made to the dive well and the slide tower was refinished.

The Park District, in cooperation with the Village and County, joined efforts and coordinated their individual construction projects. While the County project focused on reducing flooding to the area, the Park District improved baseball fields, lighting to the fields, and renovated the hub area. The playground and sled hills were relocated. Work is still underway to improve the in-line skating court, and replace the pathways surrounding the park. Plans are also under development for new flush washrooms. The Park is officially slated to reopen in Spring of 2016.

The mission of the Carol Stream Park District is to enrich our community by fulfilling our residents needs for healthy, accessible, quality recreation activities, parks and facilities, and to be responsible stewards of our community resources.

Letter from the Executive Director

The Parks Foundation builds and strengthens the financial resources of the Carol Stream Park District by receiving gifts, grants, bequests and endowments on the district’s behalf. They are currently raising funds for: financial assistance, park and facility improvements, recreation program enrichment, and Greening Initiatives. You can support the Parks Foundation by giving financial gifts, bequests, or by volunteering your time. For more information, please visit: csparks.org/about-us/carol-stream-parks-foundation/

I write you following the completion of my first year as Executive Director. The year was significant for me personally as I familiarized myself with this hospitable Village, its residents, business community, and a talented and resourceful staff here at the Park District. I am proud to see the District’s dedication to the community and eager to move forward to position the District as a continuous, financially responsible, high-performing provider of recreational and sports services, and most of all, family fun. The Park District experienced many accomplishments in 2014. The Fountain View Recreation Center celebrated its one-year anniversary and became the first LEED certified public recreation center in Illinois. Today it is home to hundreds of swim lessons, basketball games, fitness classes, and more. Final touches were made to McCaslin Park, making it a multi-sport complex/destination. The Armstrong Park flood mitigation project is moving along, as well as work to sports fields and playgrounds located within. Coral Cove gained a new splash playground with a dumping bucket, in addition to other features. I am pleased to be a part of these accomplishments and want you to be, too. This “Year in Review” is a collection of awards, projects, and statistics of what we achieved in 2014 and a reminder of why we are here and what we can do for you and the families of Carol Stream. In an effort to be as transparent as possible, the backside of the document is a snapshot of financial information that affects homeowners in the District. I appreciate your continued support and confidence in the Park District as we move ahead through 2015 to meet our goals and those of the community. Sincerely, Jim Reuter, Executive Director

Copies of the “2014 Year in Review” may be obtained at Elk Trail, Fountain View and Simkus Recreation Centers; or download at csparks.org.

REVENUE when the Park Board agreed with community input to go to Charges for Services $4,088,557 referendum. Based on a conservative tax base growth model of Operating Grants & Contributions 94,755 2% (compared to the 6% average the District had seen over the Capital Grants & Contributions 2,075,440 last 10 years) refinancing and issuance of new bonds could be Taxes 7,813,909 Interest Earned 12,084 accomplished without increasing the tax rate. In 2010, voters Other General Revenue 539,049 approved a referendum to issue $37 million in bonds to build a Total Revenue $14,623,794 new recreation center with an indoor pool; build and improve EXPENSES parks, facilities, sports fields, and trails. General $2,921,955 Recreation 5,560,448 The tax base has declined since 2010. Because of the way Depreciation 2,594,912 taxes are calculated, declines in home values resulted in tax Interest on Long Term Debt 2,555,700 rate increases. The Park Board was faced with the decision of Total Expenses $13,633,015 whether to complete the construction of the new recreation NET POSITION center and other projects or put a halt to the improvements. Beginning of Year $10,820,458 End of Year $11,811,237 The Park Board would like to have kept to the original referendum plan of no tax rate increase, but they also wanted STATEMENT OF NET POSITION as of December 31, 2014 to deliver the improvements for which residents voted. The Park Board is elected to represent the citizenry. It was their ASSETS consensus to deliver the improvements and amenities to the Cash & Investments $7,968,495 residents. Therefore, there has been an incremental increase Receivables, Net 8,145,197 in the Park District tax rate due to the referendum bonds. As Prepaid Items 34,823 property values begin to inch upwards, the impact will diminish Capital Assets not being depreciated 17,597,838 Capital Assets net of accumulated depreciation 40,167,891 over the next few years. Homeowners saw a change in their Total Assets $73,914,244

2014 tax payments similar to the following: 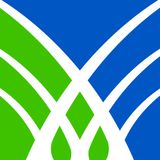