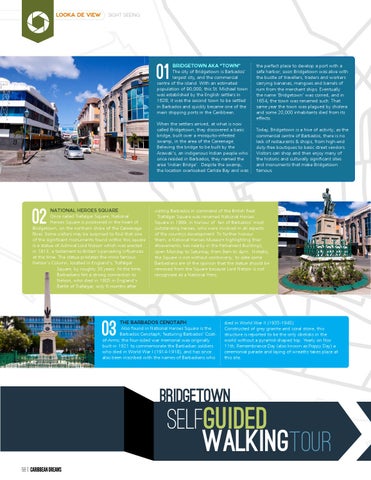 Bridgetown aka “town” The city of Bridgetown is Barbados’ largest city, and the commercial centre of the island. With an estimated population of 90,000, this St. Michael town was established by the English settlers in 1628; it was the second town to be settled in Barbados and quickly became one of the main shipping ports in the Caribbean.

When the settlers arrived, at what is now called Bridgetown, they discovered a basic bridge, built over a mosquito-infested swamp, in the area of the Careenage. Believing the bridge to be built by the Arawak’s, an indigenous Indian people who once resided in Barbados, they named the area ‘Indian Bridge’. Despite the swamp, the location overlooked Carlisle Bay and was

National Heroes Square Once called Trafalgar Square, National Heroes Square is positioned in the heart of Bridgetown, on the northern shore of the Careenage River. Some visitors may be surprised to find that one of the significant monuments found within this square is a statue of Admiral Lord Nelson which was erected in 1813; a testament to Britain’s pervading influences at the time. The statue predates the more famous Nelson’s Column, located in England’s, Trafalgar Square, by roughly 30 years. At the time, Barbadians felt a strong connection to Nelson, who died in 1805 in England’s Battle of Trafalgar, only 6 months after

Today, Bridgetown is a hive of activity; as the commercial centre of Barbados, there is no lack of restaurants &amp; shops, from high-end duty-free boutiques to basic street vendors. Visitors can shop and then enjoy many of the historic and culturally significant sites and monuments that make Bridgetown famous.

visiting Barbados in command of the British fleet. Trafalgar Square was renamed National Heroes Square in 1999, in honour of ten of Barbados’ most outstanding heroes, who were involved in all aspects of the countrys development. To further honour them, a National Heroes Museum highlighting their ahievements, lies nearby in the Parliament Buildings; open Monday to Saturday, from 9am to 4pm. Notably, the Square is not without controversy; to date some Barbadians are of the opinion that the statue should be removed from the Square because Lord Nelson is not recognised as a National Hero.

The Barbados Cenotaph Also found in National Heroes Square is the Barbados Cenotaph, featuring Barbados’ Coatof-Arms; the four-sided war memorial was originally built in 1921 to commemorate the Barbadian soldiers who died in World War I (1914-1918), and has since also been inscribed with the names of Barbadians who

the perfect place to develop a port with a safe harbor; soon Bridgetown was alive with the bustle of travellers, traders and workers carrying bananas, mangoes and barrels of rum from the merchant ships. Eventually the name ‘Bridgetown’ was coined, and in 1654, the town was renamed such. That same year the town was plagued by cholera and some 20,000 inhabitants died from its effects.

died in World War II (1935-1945). Constructed of grey granite and coral stone, this structure is reported to be the only obelisks in the world without a pyramid-shaped top. Yearly on Nov 11th, Remembrance Day (also known as Poppy Day) a ceremonial parade and laying of wreaths takes place at this site.

Rihanna the Good and the Bad: fashion must haves; the real pirates of the Caribbean; island photo hotspots; movie night...See more, do more and experience more in the islands with Caribbean Dreams - A lifestyle & travel magazine. 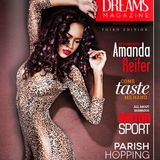