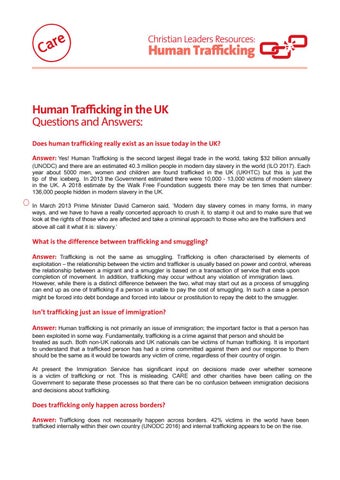 Human Trafficking in the UK Questions and Answers: Does human trafficking really exist as an issue today in the UK? Answer: Yes! Human Trafficking is the second largest illegal trade in the world, taking $32 billion annually (UNODC) and there are an estimated 40.3 million people in modern day slavery in the world (ILO 2017). Each year about 5000 men, women and children are found trafficked in the UK (UKHTC) but this is just the tip of the iceberg. In 2013 the Government estimated there were 10,000 - 13,000 victims of modern slavery in the UK. A 2018 estimate by the Walk Free Foundation suggests there may be ten times that number: 136,000 people hidden in modern slavery in the UK. In March 2013 Prime Minister David Cameron said, ‘Modern day slavery comes in many forms, in many ways, and we have to have a really concerted approach to crush it, to stamp it out and to make sure that we look at the rights of those who are affected and take a criminal approach to those who are the traffickers and above all call it what it is: slavery.’

exploitation – the relationship between the victim and trafficker is usually based on power and control, whereas the relationship between a migrant and a smuggler is based on a transaction of service that ends upon completion of movement. In addition, trafficking may occur without any violation of immigration laws. However, while there is a distinct difference between the two, what may start out as a process of smuggling can end up as one of trafficking if a person is unable to pay the cost of smuggling. In such a case a person might be forced into debt bondage and forced into labour or prostitution to repay the debt to the smuggler.

been exploited in some way. Fundamentally, trafficking is a crime against that person and should be treated as such. Both non-UK nationals and UK nationals can be victims of human trafficking. It is important to understand that a trafficked person has had a crime committed against them and our response to them should be the same as it would be towards any victim of crime, regardless of their country of origin. At present the Immigration Service has significant input on decisions made over whether someone is a victim of trafficking or not. This is misleading. CARE and other charities have been calling on the Government to separate these processes so that there can be no confusion between immigration decisions and decisions about trafficking.

Are human trafficking victims always from situations of poverty or from small rural villages? Answer: Poverty can be a contributing factor in human trafficking, but there are a huge range of reasons

that someone may become a victim. Globally, the majority of human trafficking victims come from the poorest countries and the poorest sections of national populations (UNODC 2016). However in the UK victims include British citizens and foreign nationals and may come from all socioeconomic groups.

Does human trafficking only happen ‘underground’? Answer: Although human trafficking does happen underground and in illegal markets it can also occur in legitimate labour industries including private homes, nail salons, restaurants, bars, and strip clubs.

In October 2012 police raided a company supplying labourers to chicken farms across the UK, supplying eggs to McDonald’s, Tesco, Asda, M&S, Sainsburys and other High Street retailers. Although the hens were ‘Freedom Food’ certified, the labours were anything but. 30 workers from Lithuania, rescued in the raids, reported being held in debt bondage and forced to work long shifts, bussed across the country to work, made to sleep in vans, sometimes not paid at all and kept under control with threats of violence. The Guardian, 29 October 2012

forms of human trafficking in the UK since 2009. However, over recent years, awareness of trafficking for other types of exploitation is rising. In particular, more and more victims are being discovered in forced labour and domestic servitude. People are also trafficked for organ removal, forced criminality such as benefit fraud, begging and cannabis cultivation and also sham or forced marriage. It is really important when we talk about trafficking that we focus on the exploitative nature of what is being done to people. The words we use convey a deeper meaning, so we choose them carefully. ‘Sex trafficking’ as a term isn’t quite sufficient, so at CARE we use ‘human trafficking’ and ‘trafficking for exploitation’. The use of the term ‘modern slavery’ has been growing recently, especially with the Government’s Modern Slavery Act. People who have been trafficked are in a form of modern day slavery and the two are closely related. However, human trafficking has a particular meaning and definition in law both in the UK and internationally, which is why at CARE we use that term most widely.

Why don’t victims of trafficking immediately ask for help? Answer: ‘Control of the mind is more effective than a pair of handcuffs’. Nick Kinsella, founder and former head of the UK Human Trafficking Centre.

Some victims may not understand the concept of trafficking or even identify themselves as victims. Others may not know where they are or how to seek help. They may be fearful of repercussions from their traffickers if they try to report their situation to the police. Most will have been threatened or experienced violence, some have undergone traditional rituals involving superstition or witchcraft (known as ‘juju’ in West Africa) which makes them afraid of what may happen to them if they disobey their traffickers. Many victims do not trust figures of authority because of things they have been told by their traffickers. They keep silent for fear of what state authorities will do if they are discovered. Concern about their illegal immigration status can also prevent people seeking help. Fear is a key tool used by traffickers to keep victims quiet and hidden.

Can it still be classified as human trafficking if the person has consented? Answer: Although some people may consent to travel with their trafficker and some may enter into exploitative work voluntarily, they are usually not consenting to every way that they will be exploited. In most cases victims are not making a fully informed decision as human trafficking involves force, fraud, or

coercion. A victim does not need to be kept locked up to lose their freedom. In cases involving children, the law says that even if there is no force, fraud or coercion, a child cannot consent to trafficking and exploitation. ‘Nobody really asks,‘what are the consequences of saying no? One girl I spoke to said “no” to giving oral sex to an older man. He pulled her down the stairs, face first. Would she say no next time? Is her friend who was watching going to say no?’ Sheila Taylor, Chief Executive of the National Working Group for Sexually Exploited Children, in evidence to the Centre for Social Justice.

Why must Christians act to fight against human trafficking? Answer: ‘Defend the weak and the fatherless; uphold the cause of the poor and the oppressed.’ Psalm 82:3 Human trafficking denies people their God given dignity, personal opportunity, and hope. Slavery is not a problem of the past but an issue of the present. Such an abhorrent act demands a response. The Church has a biblically mandated responsibility to care and seek justice for the most vulnerable in our society. Here at CARE we are inspired by Isaiah 58:6, which calls God’s people to ‘loose the chains of injustice and untie the cords of the yoke, to set the oppressed free and break every yoke’ as actions of worship and dedication to God. That is why all our work on this subject is tagged ‘loose the chains’ as we seek to play our part in bringing freedom to people who have been oppressed and exploited.