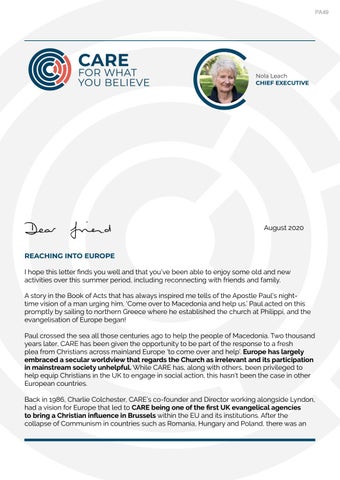 REACHING INTO EUROPE I hope this letter finds you well and that you’ve been able to enjoy some old and new activities over this summer period, including reconnecting with friends and family. A story in the Book of Acts that has always inspired me tells of the Apostle Paul’s nighttime vision of a man urging him, ‘Come over to Macedonia and help us.’ Paul acted on this promptly by sailing to northern Greece where he established the church at Philippi, and the evangelisation of Europe began! Paul crossed the sea all those centuries ago to help the people of Macedonia. Two thousand years later, CARE has been given the opportunity to be part of the response to a fresh plea from Christians across mainland Europe ‘to come over and help’. Europe has largely embraced a secular worldview that regards the Church as irrelevant and its participation in mainstream society unhelpful. While CARE has, along with others, been privileged to help equip Christians in the UK to engage in social action, this hasn’t been the case in other European countries. Back in 1986, Charlie Colchester, CARE’s co-founder and Director working alongside Lyndon, had a vision for Europe that led to CARE being one of the first UK evangelical agencies to bring a Christian influence in Brussels within the EU and its institutions. After the collapse of Communism in countries such as Romania, Hungary and Poland, there was an

opportunity to support parliamentarians and others in public life to speak up for life, family values and other key ethical issues. Then, in 2003, the European Leadership Forum (ELF) was launched in Budapest ‘to unite, equip, and resource evangelical leaders to renew the Biblical Church and evangelise Europe’ especially through the teaching of Christian apologetics. Charlie Colchester with close colleague Charlie Hoare – now a Trustee of CARE – were thrilled to take part in their annual conferences. As ELF’s vision expanded, CARE was asked to sponsor and lead its Politics and Society Network, sharing from our experience of influencing public policy and legislation with others around Europe with a similar vision. EQUIPPING CHRISTIAN LEADERS Fifteen years on and ELF – now renamed Forum of Christian Leaders (FOCL) – has massively expanded to reach far beyond Europe. I have the privilege of serving on the International Board and am involved in planning each year’s events. Because of Covid, instead of an expected 900 evangelical leaders coming to Wisła in Poland, over 5,000 delegates from 111 countries participated online! Four of us from CARE were part of the speaking team. In 2021, we expect that delegates will once again meet face-to-face, as well as thousands more participating online. There are also FOCL year-round mentoring programmes. I am honoured to lead one for women leaders of organisations and, from next year, I will also be leading one for emerging leaders and Christians in the political sphere. We believe this presents a God-given opportunity for CARE to come alongside those with a similar vision to ours, to be a grace-filled, professional voice within their own nations’ societies and parliaments. We want to inspire believers to faithfully preach the gospel and exercise their ‘gospel responsibility’ to be effective light and salt in society, involved in social action and engaging in the political sphere. Like us, they face issues of freedom of speech and belief, euthanasia, human trafficking, and protection of the unborn child. Thank you for praying and supporting us in our ministry here in the UK, and further afield. May God continue to bless you in all that you seek to do for Him. Every blessing

NOLA LEACH Chief Executive P.S. I’m enclosing 10 Ways to Pray about Europe which I hope will assist you in your occasional prayers for your fellow-European brothers and sisters in Christ.