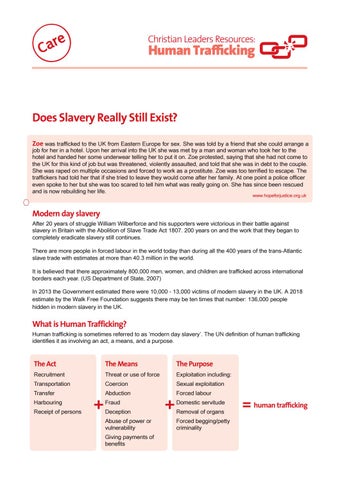 Does Slavery Really Still Exist? Zoe was trafficked to the UK from Eastern Europe for sex. She was told by a friend that she could arrange a

job for her in a hotel. Upon her arrival into the UK she was met by a man and woman who took her to the hotel and handed her some underwear telling her to put it on. Zoe protested, saying that she had not come to the UK for this kind of job but was threatened, violently assaulted, and told that she was in debt to the couple. She was raped on multiple occasions and forced to work as a prostitute. Zoe was too terrified to escape. The traffickers had told her that if she tried to leave they would come after her family. At one point a police officer even spoke to her but she was too scared to tell him what was really going on. She has since been rescued and is now rebuilding her life. www.hopeforjustice.org.uk

After 20 years of struggle William Wilberforce and his supporters were victorious in their battle against slavery in Britain with the Abolition of Slave Trade Act 1807. 200 years on and the work that they began to completely eradicate slavery still continues. There are more people in forced labour in the world today than during all the 400 years of the trans-Atlantic slave trade with estimates at more than 40.3 million in the world. It is believed that there approximately 800,000 men, women, and children are trafficked across international borders each year. (US Department of State, 2007) In 2013 the Government estimated there were 10,000 - 13,000 victims of modern slavery in the UK. A 2018 estimate by the Walk Free Foundation suggests there may be ten times that number: 136,000 people hidden in modern slavery in the UK.

What is Human Trafficking?

Threat or use of force

Human trafficking is recruiting, transporting or accommodating people by coercion or deception for the purpose of exploitation. Traffickers often prey on the most vulnerable men and women, falsely promising a well-paid job and hope for the future for themselves and their families. They are held through debt bondage, the confiscation of legal documents, or drug dependency and find themselves in unfamiliar settings, with little knowledge of their legal rights, and in some cases completely dependent on their trafficker. Many are wary of seeking help from the authorities due to their trafficker’s misuse of power or their insecure immigration status. People are trafficked into forced labour, sexual exploitation, benefit-fraud, domestic servitude, forced begging and organ removal. About a third of the people trafficked in the UK are children. In particular, many children are exploited for the purpose of cultivating cannabis. (UKHTC 2014). Unfortunately many of these young people are arrested and imprisoned for these drug offences when police raid the premises where they are working. Too often victims are prosecuted for drug offences while the people who brought them here and used threats and manipulation to force them into it are never caught.

“Added to the lack of parental care given by the exploiters, many child victims exist in an emotional vacuum,

with no love, no affection, no attention ever demonstrated towards them by their exploiters. The deceit, abuse and exploitation experienced at the hands of those they expected to care for them and help them achieve a better life result in a deep emotional and psychological scarring. Debbie Ariyo, AFRUCA

Why is slavery more prevalent than ever before? Global markets: Almost 900 million tourists travel the world each year. People and goods are moving round the world increasingly more freely. Human trafficking is fuelled by today’s economy which demands a constant supply of cheap goods and services and facilitated by corruption and ineffective law enforcement bodies. Organised crime: Human trafficking takes $32 billion a year (UNODC). There are reports that some

organised crime groups are switching their attention from drugs to human beings, in search of higher profits at lower risk (UNODC). Human beings can be exploited over and over again, whereas drugs can only be used once. Human Trafficking is the fastest growing illegal trade in the world (UNODC).

Society’s attitudes to sex: Those who pay for sex with women in prostitution are products of our culture

which has normalised the idea of a commercial sex ‘industry’. Our media is full of stories both fictional and from real life that portray paying for sex as something that is consensual and harmless. The stories of those who are exploited, manipulated and vulnerable are rarely heard.

The Internet: UN GIFT published a report in 2008 highlighting that new information technologies have made

it easier, cheaper, and faster to make transactions in human trafficking. People can now ‘shop’ online for men, women, and children something that was simply not possible before the internet. The sheer size of the internet makes it is easier to avoid police detection and interception. Offenders are now known to targeting children through social networking sites (CEOP, Disadvantaged Children and Online Risk, Livingstone et al, 2011).

Elizabeth thought she was being brought to UK from Nigeria to go to school. But when she got here she was forced by her trafficker to be a domestic servant. She was not allowed to leave the house or to eat meals with the family. She was made to do extremely long and arduous hours of housework in the home and was threatened with being sent back to Nigeria if she didn’t do exactly as she was told. Elizabeth was raped and sexually assaulted by the man and woman who trafficked her and by another friend of theirs. She became pregnant and was forced to have an abortion. Her traffickers beat her and took away her passport. They told Elizabeth they had spent a lot of money transporting her to the UK that she needed to repay. Eventually after her female trafficker died her children forced Elizabeth out onto the streets. Thankfully she was able to find help.

In late 2012 police raids uncovered systematic abuse of Lithuanian men tricked into work in agriculture in the UK. Job adverts had been placed on the internet and in Lithuanian newspapers. Men who responded to the adverts were brought to the UK in minibuses to work in the poultry sector. The men were charged a fee of £350 to the ‘employment agent’ plus £120 for their travel costs. When they arrived in the UK the men were bussed around the country to different locations where they were put to work catching chickens and putting them in crates ready for slaughter. The men would spend several days at a time in vans. They had to sleep in the vans, there were no washing facilities and were provided with little food. When not in the vans their accommodation was squalid. The men were forced to share mattresses on the floor, sleeping 9 men to a room. What is more, money was deducted from their wages to pay for this accommodation and related heating costs. The Lithuanian man working for the company used threats, intimidation and violence to control the workers and make sure they did as they were told. Interdepartmental Ministerial Group on Human Trafficking