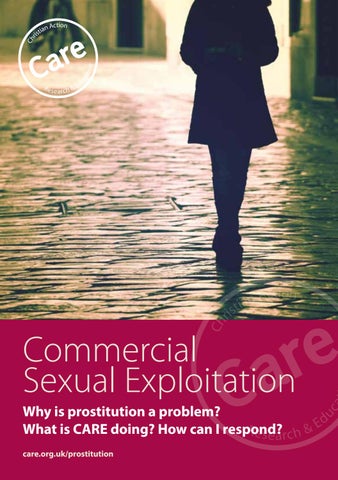 Commercial Sexual Exploitation Why is prostitution a problem? What is CARE doing? How can I respond? care.org.uk/prostitution

Why is prostitution a problem? Exploitation within the sex industry affects some of the most vulnerable people in our society. Often it is a personâ&#x20AC;&#x2122;s lack of choice that forces them to â&#x20AC;&#x2DC;chooseâ&#x20AC;&#x2122; prostitution. Some get involved in selling sexual services at a young age and many have experienced abuse in childhood or have spent time in local authority care. Studies show that high numbers of women in prostitution have experienced coercion from a partner, pimp or relative and that incidents of violence are much higher than in the rest of society. Drug and alcohol misuse is a problem for some and chaotic lifestyles make it difficult for people to leave prostitution without support.

There is also a link between prostitution and trafficking for sexual exploitation. Whilst most people in prostitution have not been trafficked, many women and children are trafficked to provide sexual services. Around two thirds of all women and girls identified in the UK as possible victims of modern slavery have experienced sexual exploitation. We recognise that some people say they are in prostitution by choice. However, when seen as a whole, prostitution clearly contributes to social injustice. As Christians, we believe that God has compassion on those who are most vulnerable and that we have a responsibility to work for a world where people are protected from exploitation and can find hope and restoration.

What needs to change? 1. Addressing demand At its most fundamental level prostitution is driven by the demand of those, mostly men, who pay for sexual services. Tackling the demand for paid sexual services and addressing the market for prostitution is crucial to preventing the exploitation of vulnerable people. In 1999 Sweden introduced laws to criminalise the purchase of sexual services, which they report to be effective in changing attitudes towards commercial sexual exploitation and reducing levels of prostitution and trafficking. This style of law has now also been adopted in Norway, Iceland, Canada, Northern Ireland, France, the Republic of Ireland and Israel. It has also been endorsed by the European Parliament and the Council of Europe Parliamentary Assembly. 2. Support to exit There is evidence that many people involved in prostitution would like to stop, but they face significant barriers to doing so. In particular, they need tailored drug treatment, safe and supported housing, mental health support, debt counselling and access to education and training programmes to help them find and sustain employment. Although there are some excellent support programmes, many are underfunded and others do not provide a fully holistic range of support. Greater provision of specialist exit support is badly needed. care.org.uk/prostitution

What is CARE doing? Over a number of years, CARE has been calling for legislation on prostitution that offers greater justice for the vulnerable majority, by making it a criminal offence to purchase sexual services. We welcomed the adoption of this approach in Northern Ireland in 2015 and were pleased to act as the principal advisor to Lord Morrow who brought the law to the Northern Ireland Assembly. We continue to engage with politicians in the Scottish and Westminster Parliaments encouraging them to follow this same model. We are also calling on governments across the UK to take a more strategic approach to supporting people to exit prostitution, including funding for more services to provide such support.

‘Loose the chains of injustice and untie the cords of the yoke, to set the oppressed free … then your light will break forth like the dawn, and your healing will quickly appear … you will call, and the Lord will answer; you will cry for help, and he will say: here am I.’ from Isaiah 58: 6-9 (NIV)

Sharon’s story* Both Sharon’s parents were heroin users; her mother was also a manic depressive. Sharon grew up in and out of the care home system. Aged 17, a boyfriend introduced her to drugs and encouraged her into prostitution to fund both of their addictions. Working on the street selling sex, Sharon, now 25, has experienced severe violence, been raped many times and made to perform degrading acts with ‘clients’. Her drug habit and chaotic lifestyle have left her homeless many times and forced to have sex in order to have a roof over her head. Her desperation for drug money means she often has unprotected sex and has contracted several sexually transmitted infections. She has given birth to two children, both adopted as babies.

Claire’s story* Claire grew up in a loving family, but in her late teens found herself in the big city a long way from home, having been greatly misled about the circumstances she was coming to. Soon her money ran out and the pressure to get involved in prostitution began. Claire went from being a happy trusting girl to finding herself standing in a penthouse being looked over by a madam. Claire was involved in the supposed ‘high end’ of prostitution in London but experienced degrading and violent behaviour from ‘clients’ and at one point she was trafficked from the UK to a prostitution ring in another country. Just before she managed to escape from prostitution Claire was so traumatised by her experiences that she had frequent panic attacks and lost the ability to speak, communicating only through written notes.

How can I respond? You can stay informed about what the Government is doing and on other news on commercial sexual exploitation via our website care.org.uk/news/prostitution You can write to your MP and your MSPs, AMs or MLAs or arrange to meet them in person, either alone or with other supporters. You can contact your Police and Crime Commissioner (in England and Wales) to encourage them to make addressing demand for prostitution a key priority in your area. You can pray for survivors and those continuing to experience exploitation, for local organisations providing support for people in and seeking to exit prostitution, and for police and politicians as they work to prevent and reduce the harm of commercial sexual exploitation. You can find more information on this issue at: care.org.uk/prostitution

More Information If you would like more information about Commercial Sexual Exploitation, please go to our website or contact the CARE Public Affairs Team on 020 7233 0455 or at mail@care.org.uk CARE is a registered charity and a company limited by guarantee, registered in England and Wales at 53 Romney Street, London, SW1P 3RF. Company No: 3481417, Charity No: 1066963, Scottish Charity No: SC038911 Chief Executive Nola Leach | Chairman Lyndon Bowring | February 2019 All photos: generic library images. * These are the stories of real people whose names have been changed to protect their privacy.