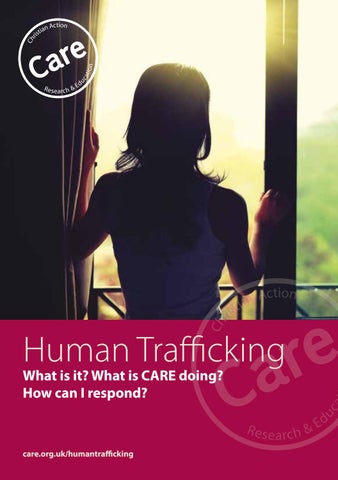 Human Trafficking What is it? What is CARE doing? How can I respond?

What is human trafficking? Human trafficking involves recruiting, transporting or holding a person by use of threats, coercion or deception in order to exploit them. Essentially, it is the oppression and abuse of people motivated by financial or personal gain. It is often described as a form of modern day slavery. Trafficking happens all over the world, across international borders and within countries. In the UK each year about 5,000 men, women and children are helped to escape from trafficking, but this is just the tip of the iceberg. The Government estimates there are 10,000 â&#x20AC;&#x201C; 13,000 victims of modern slavery in the UK, but in 2018 the WalkFree Foundation estimated there were 136,000 people in modern slavery in the UK. Victims of trafficking are often tricked into coming to the UK by false promises or because of threats against them or their family. People are trafficked into prostitution, forced labour (in agriculture, building work, nail bars, car washes, fishing, restaurants and other industries), domestic servitude, forced begging, benefit fraud, petty criminality and organ removal. They are forced to work for little or no pay; they may have limited freedom and poor living conditions. Many experience physical or emotional abuse.

There are thought to be around 40 million people in modern day slavery worldwide.

Maryâ&#x20AC;&#x2122;s story Mary fled her village in Nigeria because of abuse from the community elders. Whilst living on the streets of the capital city, she met a man called Tony who told her she could get a good job in England. He bought her a ticket and came with her to London. Hours after she arrived, Mary was taken to a brothel where she was locked in a room. For many months she was forced to have sex with up to 10 or 12 men a day who paid money to Tony. care.org.uk/humantrafficking

Human trafficking denies people their God-given dignity, future and hope. God calls on His Church to seek justice for those who are exploited.

What is CARE doing? CARE has been working to address human trafficking since 2006. We raise awareness and work for changes in the law and Government polices across the UK Parliaments and Assemblies. We were actively involved in the development of new laws across the UK in 2015, supporting amendments to the Modern Slavery Act 2015 and the Human Trafficking and Exploitation (Scotland) Act 2015. We also acted as the principal advisor to Lord Morrow, who took the Human Trafficking and Exploitation (Criminal Justice and Support for Victims) Act (Northern Ireland) 2015 through the Assembly. However, there is still more to be done. Our work focuses on these areas: • tackling the demand for human trafficking for sexual exploitation • ensuring that survivors of exploitation are given adequate care and protection • provision of special support for child victims

‘Loose the chains of injustice and untie the cords of the yoke, to set the oppressed free … then your light will break forth like the dawn, and your healing will quickly appear … you will call, and the Lord will answer; you will cry for help, and he will say: here am I.’ from Isaiah 58: 6-9 (NIV)

How can I respond? You can stay informed about what the Government is doing and other human trafficking news on our website care.org.uk/news/human-trafficking You can write to your MP and your MSPs, AMs or MLAs or arrange to meet them in person, either alone or with other supporters. You can contact your Police and Crime Commissioner (in England and Wales) to encourage them to make trafficking a key priority in your area. You can speak about this issue to people that you know. Contact your local newspaper, or speak at your church, school or student groups. You can join with people in your area to campaign together. You can be watchful for signs of trafficking and keep your eyes open for it in your community. If you suspect an instance of trafficking in your area you can contact: • the Police (101 or 999 if someone is in immediate danger) • the National Modern Slavery Helpline (0800 0121 700 modernslaveryhelpline.org) • Crimestoppers (0800 555 111crimestoppers-uk.org) where you can leave information anonymously Do not confront a suspected trafficker or victim of trafficking. Your safety and that of any possible victims is of primary importance. You can pray for survivors and those continuing to experience exploitation, for police and for politicians as they work to prevent and reduce human trafficking. You can find more ideas of how to take action and further information on this issue at: care.org.uk/humantrafficking

More Information If you would like more information about Human Trafficking, please go to our website or contact the CARE Public Affairs Team on 020 7233 0455 or at mail@care.org.uk CARE is a registered charity and a company limited by guarantee, registered in England and Wales at 53 Romney Street, London, SW1P 3RF. Company No: 3481417, Charity No: 1066963, Scottish Charity No: SC038911 Chief Executive Nola Leach | Chairman Lyndon Bowring | February 2019 All photos: generic library images. Names in case studies have been changed.