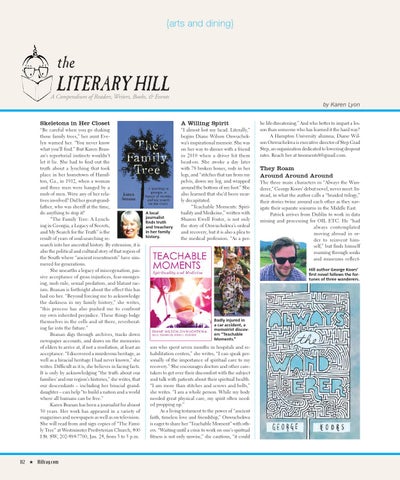 by Karen Lyon Skeletons in Her Closet

“Be careful when you go shaking those family trees,” her aunt Evelyn warned her. “You never know what you’ll find.” But Karen Branan’s reportorial instincts wouldn’t let it lie. She had to find out the truth about a lynching that took place in her hometown of Hamilton, Ga., in 1912, when a woman and three men were hanged by a mob of men. Were any of her relatives involved? Did her great-grandfather, who was sheriff at the time, do anything to stop it? “The Family Tree: A Lynching in Georgia, a Legacy of Secrets, and My Search for the Truth” is the result of years of soul-searching research into her ancestral history. By extension, it is also the political and cultural story of that region of the South where “ancient resentments” have simmered for generations. She unearths a legacy of miscegenation, passive acceptance of gross injustices, fear-mongering, mob rule, sexual predation, and blatant racism. Branan is forthright about the effect this has had on her. “Beyond forcing me to acknowledge the darkness in my family history,” she writes, “this process has also pushed me to confront my own inherited prejudice. These things lodge themselves in the cells and sit there, reverberating far into the future.” Branan digs through archives, tracks down newspaper accounts, and draws on the memories of elders to arrive at, if not a resolution, at least an acceptance. “I discovered a murderous heritage, as well as a biracial heritage I had never known,” she writes. Difficult as it is, she believes in facing facts. It is only by acknowledging “the truth about our families’ and our region’s histories,” she writes, that our descendants – including her biracial granddaughter – can help “to build a nation and a world where all humans can be free.” Karen Branan has been a journalist for almost 50 years. Her work has appeared in a variety of magazines and newspapers as well as on television. She will read from and sign copies of “The Family Tree” at Westminster Presbyterian Church, 400 I St. SW, 202-484-7700, Jan. 24, from 3 to 5 p.m.

“I almost lost my head. Literally,” begins Diane Wilson Onwuchekwa’s inspirational memoir. She was on her way to dinner with a friend in 2010 when a driver hit them head-on. She awoke a day later with 78 broken bones, rods in her legs, and “stitches that ran from my pelvis, down my leg, and wrapped around the bottom of my foot.” She also learned that she’d been nearly decapitated. “Teachable Moments: Spirituality and Medicine,” written with Sharon Ewell Foster, is not only the story of Onwuchekwa’s ordeal and recovery, but it is also a plea to the medical profession. “As a per-

A local journalist finds truth and treachery in her family history.

be life-threatening.” And who better to impart a lesson than someone who has learned it the hard way? A Hampton University alumna, Diane Wilson Onwuchekwa is executive director of Step Grad Step, an organization dedicated to lowering dropout rates. Reach her at tmoments8@gmail.com.

They Roam Around Around Around The three main characters in “Always the Wanderer,” George Koors’ debut novel, never meet. Instead, in what the author calls a “braided trilogy,” their stories twine around each other as they navigate their separate sojourns in the Middle East. Patrick arrives from Dublin to work in data mining and processing for OIL ETC. He “had always contemplated moving abroad in order to reinvent himself,” but finds himself roaming through souks and museums reflectHill author George Koors’ first novel follows the fortunes of three wanderers.

son who spent seven months in hospitals and rehabilitation centers,” she writes, “I can speak personally of the importance of spiritual care to my recovery.” She encourages doctors and other caretakers to get over their discomfort with the subject and talk with patients about their spiritual health. “I am more than stitches and screws and bolts,” she writes. “I am a whole person. While my body needed great physical care, my spirit often needed propping up.” As a living testament to the power of “ancient faith, timeless love and friendship,” Onwuchekwa is eager to share her “Teachable Moment” with others. “Waiting until a crisis to work on one’s spiritual fitness is not only unwise,” she cautions, “it could