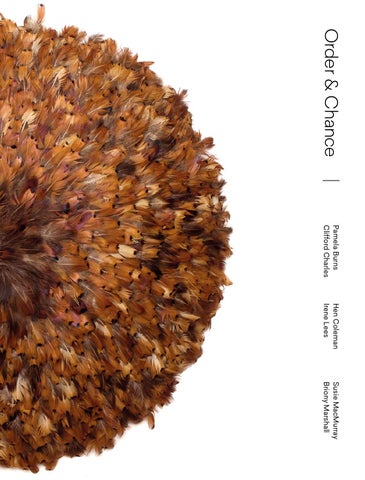 Order &amp; Chance All works are for sale upon receipt of catalogue

There are many threads, visible and invisible, that weave through the natural world and that of humankind. They connect, cross-over and inform — they are the ‘order’ of things. They wind through us and stay the journey. It is what we do on the journey that creates the ‘chance’. The outcome is not always certain, the work to get there requires rigour. Sometimes we might alter our route, our timing varies or circumstances change, we act differently, something shifts. It is these unexpected events that mean the result cannot be anticipated and will never be the same for everyone, and in that, a profound and touching human beauty is revealed. We have brought together six artists who concern themselves with these ideas. They are precise in their methods, orderly and scientific in their approach —  yet all embrace and are intrigued by natural order and humankind’s place within it. Some meet this idea head on, others explore the notion of human frailty and existence and some seek to express the fundamental forces of Earth itself. As artists they endeavour to tread the path between order and chance and tease

out truth. Too ordered or perfect and the work cannot speak, too much chance and it’s a mess. They work between two poles looking for patterns in the world, then unravel and reveal. It is in this space, navigating the current between the banks of order and chance that they play their game. We invite you be visually and intellectually stimulated as you thread your own way through this intriguing ‘Order and Chance’ exhibition and perhaps to appreciate beauty where you may not have expected to see it before.

In Burns’ work there are ridges and rhythms that appear to come from the depth of the landscape. Lines and shapes that draw you back to Neolithic slopes and coastal tide markings. Linking us with the past, this is a viscerally felt world, of earthy truths, where land meets sea, and sea meets sky. Burns’ technique is engrossing and immensely detailed, lines are repeated and minute in scale, some have been painstakingly created in reverse and it is hard not to wonder at how these paintings are made. The mysteries of her compositions are a journey beyond the landscape, to ideas of other frontiers, and on to the realms of colour, form and texture that make up the language of abstraction. We are showing her latest work from her Chalk paintings —  mesmeric, mysterious and fundamental. Burns studied at the Royal Academy Schools, later teaching at St Martins and Chelsea College of Art. Today she lives in Pembrokeshire and has exhibited extensively in both public and private collections worldwide.

Clifford Charles was born in South Africa. Here he began working in the practice of ‘Engaged Art’, first with The Dholmo Theatre and later as part of the Afrika Cultural Centre, an art activist group working during the struggle against Apartheid. Since then he has travelled and exhibited his work in many countries. Exhibitions of significance include; the 50th Venice Biennale, a solo show for BBC Africa ‘05 and recently Frank Bowling RA’s hosted group exhibition in London “Bowlings Cru”. To Charles ‘Drawing is dangerously immediate, present and alert. Flickering between thoughtfulness and thoughtlessness. It discovers, absorbs and placates.’ He becomes engrossed in the process and allows the flow to carry away the flotsam of intention, so that as he occupies and displaces the space the drawing will find it’s own intelligence. Here he reveals the fragility of being human. It is about the intimacy of listening to your self, with all your internal voices, to have created a language without words, to find the chaos in order and peace in action.

The solitude of drawing is balanced with his collaborations. Charles works regularly with dance and theatre companies, has been South African convener at the “South” conference for artists and crafters in the Southern Hemisphere, exploring the theme of art-making in post colonial worlds, as well as written a multi-lingual art book on Soweto. Today he lives, works and travels from his studio in West Sussex, where has now been based for eight years.

Hen Coleman, born in Venezuela and now based in Britain, is a masters graduate of the Royal College of Art and a printmaking tutor at The Royal Academy Schools. Her drawings depict altered territories, informed by landscape in which the protagonist’s role is carried by recurring motifs of vessels as containers and layered natural forms in transformed states. ‘The contrast between a terrain of ‘chaotic and abundant nature’ and the more measured environment of our ideas and behaviour presents itself as a dialectic which it feels interesting to deal with. It’s a third territory, not necessarily geographical or historical, but as an unfolding space or stage for playing out memories, responses and reactions. These altered landscapes are presented through a combination of drawn and printed process, from the precision within her intricate frottaged woodcuts to the patterning of largescale charcoal and ink drawings. Hours of intense close manual work become fluid, flowing images. Here echoes can be found — the hours spent, the details,

shapes and repetitions drawn — that make her work a pivot from which we can connect and follow through the threads to all the other artists in this show. Hen Coleman’s work is included in private and public collections in the UK and the USA.

Irene Lees’ work is meticulous in skill, research and application. Her drawings are, in her own words, ‘artwork essays’. Her considerable mastery with a pen achieves an almost digital-like rendering. Yet, get close to a work by Lees and you will see that each line is hand drawn in rhythmic loops or layers of repetitive text. Contained in these tightly conceived and intricately constructed works, is a strongly felt human emotion and spirit that filters through. Featured for this exhibition are her exquisite birkas and bodices from her series, “The History of body packaging”. This collection looks at the common myths and misunderstanding behind this notorious garment and its changing significance over the centuries. Irene carefully selects and weaves together texts on the history of underwear and questions why constricting and quasi-barbaric items such as chastity belts and basques appear as erotic to today’s liberated woman. Her work hopes to explore social history, as well as analysing a seemingly ‘female’ obsession with surface appearance. Also shown are a few key pieces from “It’s only words;

Turner Prize 1984–2010”. This Collection was a study of the lives of artists winning the Turner Prize. Grayson Perry inspired the urn and much of the content, while Chris Ofili and Tracey Emin are amongst artists featured in the work. Lees should be an inspiration to us all. At 60 she embarked upon a BA in Drawing and Applied Arts at the University of the West of England and now, in her 70s, her work is regularly featured in the Jerwood Drawing Prize and the Royal Academy Summer Exhibition. In 2012 she became is a member of the Society of Women Artists. Her work is internationally exhibited as well as being held in many private, corporate and Royal collections. She currently lives and works in Cornwall.

A significant British artist, MacMurray’s work will be familiar here in Chichester for her sublimely beautiful Shell installation at Pallant House Gallery in 2006–7; a wall of over 20,000 prised open mussel shells, crow-black and stuffed with a red silk velvet. A work that was painstaking and time-consuming to create, the install was a year in conception, took seven days to put each shell in by hand and was designed to disappear with no physical trace. It is for this ‘labour-of-love’ approach that we have sought to include her pieces in this exhibition. She allows herself the freedom to experiment ‘like a scientist’ but her work is beautifully controlled and often based on chance — the chance of finding oyster shells under a gallery, a ripped hairnet or discarded violin bow strings. The materials Susie MacMurray uses are central to her work and she has an adeptness and ability to transform these objects into otherworldly works that belie their beginnings. A sense of the absent and departed human body haunts her work, leaving a ghostly footprint. Featured here are her intricate and carefully constructed pen drawings of

hairnets and we are delighted to introduce three new works; Trench Map Drawing, nos. 1, 2 and 3. Delicate and detailed, the drawings are deceptively simple. There is a tautness close-to, but the whole is free and meditative. MacMurray can tap into our feelings of fragility and transience and gives us a beauty that leaves us holding our breath. Originally trained as a classical musician, MacMurray retrained as artist in 2001. Her work includes; drawings, sculpture and architectural installations. She currently lives in Manchester and her work has been exhibited in many public and private collections worldwide. Notable past installations include filling the entire attic space of Islington Mill in Salford with 80 kg of feather down and wrapping 105 miles of gold embroidery thread throughout Kedleston Hall in Derbyshire. In the autumn of 2013 she had a highly successful exhibition at Danese Corey Gallery in New York.

Taking a rather unconventional route on her journey to become a sculptor, Briony Marshall first pursued a degree in Biochemistry at Oxford University before following her passion for art. Marshall’s science background has greatly influenced her artistic practice, and it is through this microscopic lens and her rigorous research, that she explores the place of the human in the context of scientific doctrine. As she states herself she is also “… interested in how you combine good art and good science without compromising either”. Her sculptures are less an explanation and more an exploration of the implications of the science for our understanding of truth and meaning. Briony Marshall’s installations are impressive. In 2012, she was awarded Pangolin London’s prestigious sculpture residency, which happily coincided with the 60th anniversary of the discovery of DNA. Her sculpture DNA: Helix of Life is emblematic of the great achievements of modern science. We are proud and delighted to be able to show her DNA series in this show. Standing at over two metres tall, this DNA molecule is

constructed from 634 human figures joined at the hands and feet, each representing a different atom in the DNA. Made first in wax and then cast in bronze, the work demonstrates ambitious talent paired with a rather humbled view of society; that we must support each other as individuals to operate as a whole. The integrity of the structure depends on each figure playing its part and is a powerful representation of the interconnectedness of life. Marshall and her work are held in high esteem by both the arts and science worlds. In 2015 she was awarded a FIRST@108 Public Art Award and in 2016 she has been selected as one of the 175 Faces of Chemistry by the Royal Chemistry Society to celebrate their 175th anniversary.

PAMELA BURNS, CLIFFORD CHARLES, HEN COLEMAN, IRENE LEES, SUSIE MACMURRAY, BRIONY MARSHALL There are many threads, visible and invisible, that weave through the natural world and that of humankind. They connect, cross-over and inform – they are the ‘order’ of things. They wind through us and stay the journey. It is what we do on the journey that creates the ‘chance’. The outcome is not always certain, the work to get there requires rigour. Sometimes, we might alter our route, our timing varies or circumstances change, perhaps it rained that day - we act differently, something shifts. It is these unexpected events that mean the result cannot be anticipated and will never be the same for everyone, and in that, a profound and touching human beauty is revealed. We have brought together six artists who concern themselves with these ideas. They are precise in their methods, orderly and scientific in their approach – yet all embrace and are intrigued by natural order and humankind’s place wi 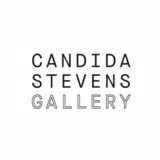