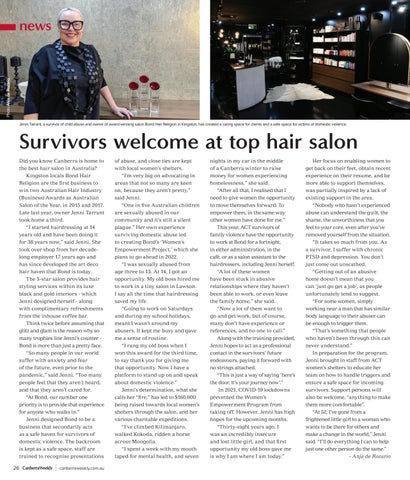 Jenni Tarrant, a survivor of child abuse and owner of award-winning salon Bond Hair Religion in Kingston, has created a caring space for clients and a safe space for victims of domestic violence.

Survivors welcome at top hair salon Did you know Canberra is home to the best hair salon in Australia? Kingston locals Bond Hair Religion are the first business to win two Australian Hair Industry (Business) Awards as Australian Salon of the Year, in 2015 and 2017. Late last year, owner Jenni Tarrant took home a third. “I started hairdressing at 14 years old and have been doing it for 38 years now,” said Jenni. She took over shop from her decadelong employer 17 years ago and has since developed the art deco hair haven that Bond is today. The 5-star salon provides hair styling services within its luxe black and gold interiors - which Jenni designed herself - along with complimentary refreshments from the inhouse coffee bar. Think twice before assuming that glitz and glam is the reason why so many trophies line Jenni’s counter Bond is more than just a pretty face. “So many people in our world suffer with anxiety and fear of the future, even prior to the pandemic,” said Jenni. “Too many people feel that they aren’t heard, and that they aren’t cared for. “At Bond, our number one priority is to provide that experience for anyone who walks in.” Jenni designed Bond to be a business that secondarily acts as a safe haven for survivors of domestic violence. The backroom is kept as a safe space, staff are trained to recognise presentations 26

of abuse, and close ties are kept with local women’s shelters. “I’m very big on advocating in areas that not so many are keen on, because they aren’t pretty,” said Jenni. “One in five Australian children are sexually abused in our community and it’s still a silent plague.” Her own experience surviving domestic abuse led to creating Bond’s ‘Women’s Empowerment Project,’ which she plans to go ahead in 2022. “I was sexually abused from age three to 13. At 14, I got an opportunity. My old boss hired me to work in a tiny salon in Lawson. I say all the time that hairdressing saved my life. “Going to work on Saturdays and during my school holidays, meant I wasn’t around my abusers. It kept me busy and gave me a sense of routine. “I rang my old boss when I won this award for the third time, to say thank you for giving me that opportunity. Now I have a platform to stand up on and speak about domestic violence.” Jenni’s determination, what she calls her “fire,” has led to $160,000 being raised towards local women’s shelters through the salon, and her various charitable expeditions. “I’ve climbed Kilimanjaro, walked Kokoda, ridden a horse across Mongolia. “I spent a week with my mouth taped for mental health, and seven

nights in my car in the middle of a Canberra winter to raise money for women experiencing homelessness,” she said. “After all that, I realised that I need to give women the opportunity to move themselves forward. To empower them, in the same way other women have done for me.” This year, ACT survivors of family violence have the opportunity to work at Bond for a fortnight, in either administration, in the café, or as a salon assistant to the hairdressers, including Jenni herself. “A lot of these women have been stuck in abusive relationships where they haven’t been able to work, or even leave the family home,” she said. “Now a lot of them want to go and get work, but of course, many don’t have experience or references, and no one to call.” Along with the training provided, Jenni hopes to act as a professional contact in the survivors’ future endeavours, paying it forward with no strings attached. “This is just a way of saying ‘here’s the door, it’s your journey now’.” In 2021, COVID-19 lockdowns prevented the Women’s Empowerment Program from taking off. However, Jenni has high hopes for the upcoming months. “Thirty-eight years ago, I was an incredibly insecure and lost little girl, and that first opportunity my old boss gave me is why I am where I am today.”

Her focus on enabling women to get back on their feet, obtain recent experience on their resume, and be more able to support themselves, was partially inspired by a lack of existing support in the area. “Nobody who hasn’t experienced abuse can understand the guilt, the shame, the unworthiness that you feel to your core, even after you’ve removed yourself from the situation. “It takes so much from you. As a survivor, I suffer with chronic PTSD and depression. You don’t just come out unscathed. “Getting out of an abusive home doesn’t mean that you can ‘just go get a job’, as people unfortunately tend to suggest. “For some women, simply working near a man that has similar body language to their abuser can be enough to trigger them. “That’s something that people who haven’t been through this can never understand.” In preparation for the program, Jenni brought in staff from ACT women’s shelters to educate her team on how to handle triggers and ensure a safe space for incoming survivors. Support persons will also be welcome, “anything to make them more comfortable”. “At 52, I’ve gone from a frightened little girl to a woman who wants to be there for others and make a change in the world,” Jenni said. “I’ll do everything I can to help just one other person do the same.” - Anja de Rozario 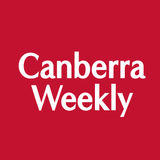