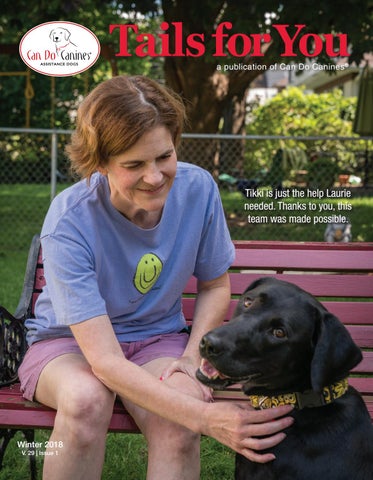 Tails for You a publication of Can Do Canines ®

Tikki is just the help Laurie needed. Thanks to you, this team was made possible.

THE HELP SHE NEEDED How Tikki is changing Laurie’s life Laurie Tschida lives in a quiet neighborhood in St. Paul, Minnesota with her husband, Jim. After losing their Terrier, Lucy, things seemed even quieter. But now the house is much livelier with the addition of Tikki, Laurie’s Mobility Assist Dog. “When we were first learning brace, I really needed help getting off the kitchen floor, and when [Tikki] did it for me I just started bawling,” Laurie says. “That just was everything to me … Then I knew that this was going to be right—that she was going to be the help I needed.” The ball-obsessed Black Labrador Retriever has made a huge impact on Laurie’s life. “It makes me feel so good to know that when [Jim] can’t be here, she is. Just to pick up something. It sounds so minor but it’s not. It really is a big thing that she’s doing.”

I was her person really quick,” Laurie says of their relationship. “She has just reaffirmed everything that I had hoped for and wanted. Everything she does is just amazing for me,” she says through tears. Life was different before Tikki. “If I had gone to lunch by myself and Jim wasn’t there and I dropped something, I would have had Tikki tugs open the refrigerator to ask people [to help me].” Now that Tikki is there, Laurie doesn’t need to rely on others.

“She has just reaffirmed everything that I had hoped for and wanted.” Independence is now a reality for Laurie. She and Tikki are able to go out to lunch alone, travel by plane more confidently, enjoy the outdoors securely, and feel safer at home on her own. Laurie is so grateful to everyone that made her match with Tikki possible. “They made an unbelievable difference in my life,” she says. “Thank you from the bottom of my heart.”’

Diagnosed with multiple sclerosis at 26 years old, the disease has since progressed. It mainly affects her legs with muscle weakness and spasticity, as well as poor balance. Laurie is only able to stand for a limited time before she becomes fatigued and her legs give out. Because of this, she uses a variety of mobility equipment: a walker, scooter, motorized cart, and manual wheelchair. She also experiences some mental difficulties including brain fog, delays in her cognitive ability, and short-term memory loss under stress. Laurie is a soft-spoken, music-loving, retired paralegal. Can Do Canines found her perfect match in Mobility Assist Dog Tikki. “When I was coming in for training— even though it was just the beginning—she knew that

PUPPIES, PUPPIES, PUPPIES! From the whelping box: Recently, we have welcomed five litters of puppies! Bette gave birth on September 15 to her ‘B’ litter: eight adorable puppies. She was hosted by whelping home volunteers Karin and Elroy Balgaard. Xyla welcomed her troop of six puppies in her ‘C’ litter on October 7. Rick and Patti Dougherty kindly whelped Xyla and pups. Venus proudly presented her ‘D’ litter of five puppies on October 13. She stayed with whelping home volunteers Kolleen Herr and family. Magyk had nine puppies in her ‘E’ litter. On November 19, Holly and Ken Schultz and Magyk welcomed the nine sweet puppies.

Diego of Venus’s ‘D’ litter hops around the yard

Finally, Clover gave birth to her ‘F’ litter of nine on November 28. She and puppies stayed with whelping home volunteers Lindsay Merkel and family.

How you can help: We are looking for Puppy Program Volunteers for short and long-term opportunities! Several puppies need loving volunteers to raise and train them to be the awesome assistance dogs we know they have the potential to be. Won’t you consider opening your heart and home? It’s the most profound way to truly make a difference in another person’s life. Contact volunteer coordinator, Robyn Rodrigue, at rrodrigue@can-do-canines.org or 763-331-3000 x119.

The ‘E’ litter puppies try out their capes

and made the following possible in 2017. We certified our 600th assistance dog team.

We had more than 300 dogs and puppies in training to become assistance dogs.

There were 117 puppies born from our own breeding efforts.

A NEW SENSE OF MOBILITY Ginger is helping to ease Leigh Anne’s pain In a house in northeast Minneapolis, Leigh Anne Marrin is adjusting to life with a new sense of mobility. Leigh Anne has Ehlers Danlos Syndrome, a group of connective tissue disorders that causes joints to be constantly fatigued, or to partially or fully dislocate. The syndrome has affected her grip strength, making it difficult to grab heavier objects. And once she’s grabbed something, she can’t combine movements like lift and pull, or reach and push.

The pair was matched in October of 2017 and passed their certification tests shortly after. Sarah, their client services coordinator, says the two “match on personality so well.” Leigh Anne used to tense up her body in anticipation of the pain that would come with opening her refrigerator. Now Ginger tugs Ginger tugs open the refrigerator open the door for her so Leigh Anne can grab what she needs. “It’s no longer painful to get stuff out of the fridge. I’m no longer waiting until I absolutely have to get into the fridge.” But that’s not all Ginger helps with. “[She] helps a lot with my frustration around the house,” she says. Even seemingly simple tasks like grabbing the kitchen towel are difficult for Leigh Anne. “Before her it was a minute of scooting around and 50,000 turns, and every turn I take is painful on various joints.” But now Ginger can help ease both Leigh Anne’s frustration and pain by retrieving items for her. “I’m so exceptionally grateful for her,” she says.

“I’m so exceptionally grateful for her.” The Mobility Assist Dog has made a big impact in Leigh Anne’s life. “Ginger is such a tremendous help to me after such a short period of time,” she says. “I don’t feel I am equal to expressing my deep gratitude to everyone who has contributed to making her presence in my life possible ... So even though it feels vastly inadequate, thank you so very much.” Thank you for making this partnership possible: Puppy Raiser: Stanley Correctional Institution Special Thanks: Sue McLinn, Jerry Schendel You: Thank you for your donations!

IT RUNS IN THE FAMILY

Tammy Jagerson and Robin Kittridge Edel are familiar with giving back. Their parents, Kathy and Rand Patton, were active Lions members, and particularly involved with Can Do Canines. “We lived and breathed Lions forever,” Tammy says of growing up. Kathy and Rand were involved with Can Do Canines both as Lions members in the Albertville Lions Club, but also as individuals. They became personal contributors and continued their annual support for 13 years. They also left a very generous contribution to Can Do Canines through their will. It was decided that an assistance dog team should be sponsored in their memory. Their donation sponsored the life-changing team of Logan Caillier and Autism Assist Dog Gypsy. “She seems to understand him almost more than us sometimes,” Aaron, Logan’s father, says of the German Shepherd mix.

“It’s so much better now. We don’t have the worry or the trepidation about going out in public anymore,” Aaron says. When the family would go out and about, Logan would run off. Now Gypsy is there to make sure he can’t. “We’re like a little train,” Aaron says. He or Logan’s mother, Kimberly, control Gypsy’s leash while Logan holds onto a short handle attached to Gypsy’s cape and wears a belt attached to her harness by a six-foot tether.

“She seems to understand him almost more than us sometimes.” Aaron and Kimberly can sleep better at night knowing that Gypsy is by Logan’s side. They used to worry about where he might wander to in the middle of the night or what he might get into. Kimberly says, “Now he has no desire to go anywhere else but to see Gypsy.” The two families met at Can Do Canines, and Tammy and Robin were able to see the direct impact of their parents’ donation. The families spoke, sharing stories, while Logan confidently walked the room with Gypsy, watching himself in the mirrors. Tammy and Robin with the Caillier family

Logan was diagnosed with autism at three years old. He struggles with bolting in response to distractions, has no sense of danger, and frequently experiences meltdowns. He also has difficulty with social engagement with peers and adults. Thanks to the Patton’s donation, the Cailliers are experiencing the benefits of an Autism Assist Dog.

“We have a dog and he’s not nearly as smart as Gypsy,” Tammy laughs. Everyone watches as Gypsy shows off one of her skills, ‘go mat’ and lies down on a small piece of rug—it’s followed by a resounding “awe” from her audience. At one point, Gypsy walked over to Tammy and Robin, first giving Tammy a kiss and then Robin, almost her way of saying, “thank you for helping to match me with my boy, Logan.”

SAVE THESE DATES The Fetching Ball

We’ll be “Honoring Team Spirit” at this year’s Fetching Ball. Join us for a glamorous evening at the DoubleTree Bloomington. Enjoy inspiring stories, silent and live auctions, entertainment, and delectable dining.

Join us at our winter graduation ceremony to congratulate our graduating teams on their many months of hardwork and training.

Can Do Canines is dedicated to enhancing the quality of life for people with disabilities by creating mutually beneficial partnerships with specially trained dogs. Master of Ceremonies

Thank you, Liberty Diversified International! Liberty Diversified International visited our office with pastries and gift cards for Can Do Canines employees. WOW! Thank you so much to LDI and their LDI Cares program for choosing Can Do Canines this year. We are so honored that they wanted to recognize our employees for the work we do furthering our mission. We are truly grateful for the support we receive from our community.