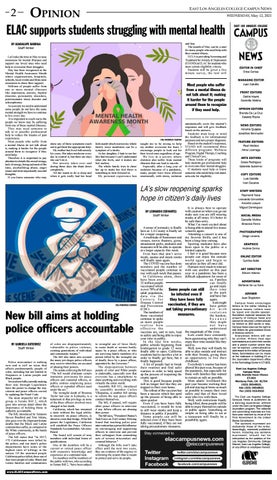 and fear. The month of May can be a start for many people who need help with their mental illness. UCLA is providing Screening and Treatment for Anxiety & Depression (STAND) at ELAC for students who meet certain eligibility criteria. Students will be given a five minute survey, the tool will

BY GUADALUPE BARRIGA Staff Writer Let’s take the time in May to raise awareness for mental illnesses and support our loved ones who need help to overcome their struggles. May has been recognized as the Mental Health Awareness Month where organizations, hospitals, schools, local events and films raise awareness to show their support. Millions of people suffer from one or more mental illnesses like depression, anxiety, bipolar disorder, personality disorders, post-traumatic stress disorder and schizophrenia. As a society we need to understand some people do not have the same mental strength we have to continue to live every day. It is important to reach out to the people we know may be suffering from one of these mental illnesses. They may need someone to talk to or possibly professional help to reduce the trauma of past experiences. Most people who suffer from a mental illness do not talk about it, making it harder for the people around them to recognize if they need help. Therefore it is important to pay attention to details like mood swings, lack of energy, being sad most of the time, alcohol/drug abuse, anger issues and most importantly suicidal thoughts. If you know someone who may

Most people who suffer from a mental illness do not talk about it; making it harder for the people around them to recognize if they need help.

show any of these symptoms reach out to get them the appropriate help. My mother has lived with anxiety for years. She takes medicine every day to control it, but there are days she can’t do it. Her anxiety takes over and during those days she shuts down completely. All she wants to do is sleep and when it gets really bad her head

feels numb which worries my whole family since numbness can be a symptom of a stroke. As her daughter, I hate to see her like that because I can’t understand what she feels, and it makes me feel useless. The whole family tries to cheer her up to make her feel there is something to look forward to. My personal experience has

taught me to be strong to help my mother overcome her fears. I encourage people to look out for their loved ones regardless of age. We live in a society where children also suffer from mental illnesses that can lead to suicide. Especially after a long year of isolation because of a pandemic, many people have been affected emotionally with stress, isolation

automatically score the student’s responses and will give feedback based on the answers. Students must keep in mind the feedback is for informational purposes and not a proper diagnosis. Based on the student’s responses; STAND will recommend three different programs: Wellness Program, Digital Therapy, Coaching and Clinical Care. These kinds of programs will help students get professional help to overcome their mental struggles. If students need help or know someone who needs help visit stand. ucla.edu for eligibility.

LA’s slow reopening sparks hope in citizen’s daily lives It is always best to operate with caution so when you go out make sure you are still wearing Staff Writer masks at all times. It’s better to be safe than sorry. What I’m most excited about A sense of normalcy is finally is being able to attend live music here as LA County is finally set concerts again. Attending a concert is one of for a major reopening. A multitude of businesses and my favorite thrills, and it has venues, movie theaters, gyms, been a long time coming. Sporting stadiums have also amusement parks, stadiums and museums will be able to operate been open to the public in a limited capacity. at a larger capacity this week. I feel it is good because now Even bars that don’t serve meals, saunas and steam rooms people can enjoy the outside world again and begin to will finally open again. The COVID vaccine has done socialize as they all once did. Humans were made to interact wonders and the number of vaccinated people continue to with one another so this past rise with each week that passes. year in a pandemic has been a In California alone, there difficult adjustment for most of us. Families have been over can finally 32 million people go and enjoy vaccinated which is over 78% of the Some people can still t h e i r t i m e at the park adult population, be infected even if and have fun data via the again. Centers for they have been fully Kids might Disease Control vaccinated, if they are have gotten and Prevention (CDC). not taking precautionary h i t w i t h isolation The numbers of measures. the hardest, those vaccinated because continue to spike they might as more people not have realize how understood effective the vaccines are, and in turn, lead the magnitude of the virus. Kids could have constantly to safety and being able to enjoy been questioning why they can’t your time in public. I n t h e l a s t f e w w e e k s , enjoy their time outside like they public schools beginning from used to. Well, now they will finally be kindergarten to grade 12 were finally able to open. California able to play outside and interact residents had to sacrifice a lot in with their friends, giving them order to finally get here, but it an opportunity to live their childhood. finally happened. Everybody’s routine has been A lot of people had to break their routines and find safer altered this past year, because of routines in order to help speed the pandemic, but especially for up the process of reopening the those with families that wanted to remain as safe as possible. county again. Most adults’ livelihood this This is good because people will no longer feel like they are past year became working their job and staying at home as much trapped in their own home. The rollout of the vaccines has as possible to ensure their own been a success which has sped safety and that of their loved up the process of being able to ones who live with them. Well, with restrictions finally open quicker. Even if you have been fully being lifted, these people will be vaccinated, it would be wise able to enjoy themselves outside to still wear masks and keep a in public again. Something as simple as being able to eat at distance in public if possible. Some people can still be a restaurant will finally be a infected even if they have been possibility again. fully vaccinated, if they are not taking precautionary measures.

Police misconduct is nothing new and is still an issue that affects predominantly people of color, including but not limited to Hispanics or Latino people and Black people. Several new bills currently making their way through Legislature have the power to change the way citizens and peace officers coexist by updating the Penal Code. The most impactful bill of the group is Senate Bill 2, which goes into serious detail about the importance of holding those in authority accountable. The bill, introduced by Senators Steven Bradford and Toni Atkins, also goes over the disproportionate deaths that the Black and Latino communities suffer, as compared to the White community, at the hands of peace officers. The bill states that “In 2017, 172 Californians were killed by the police, and our state’s police departments have some of the highest rates of killings in the nation. Of the unarmed people California police killed, three out of four were people of color. Black and Latino families and communities www.ELACCampusNews.com

of color are disproportionately vulnerable to police violence, creating generations of individual and community trauma.” The bill also takes into account the many privileges police officers may receive when they are accused of abusing their powers. The senate enforcing the bill says “The bill would eliminate certain immunity provisions for peace officers and custodial officers, or public entities employing peace officers or custodial officers sued under the act.” The wrongful death of Breonna Taylor last year in Kentucky, is a testament to that privilege as none of the three officers involved were charged in her death. California, which has remained a state without the legal ability to decertify its peace officers, is about to cross that bridge. If the bill passes the Legislature, California will establish the Peace Officers Standards Accountability Advisory Board. The board will consist of nine members with individual forms of qualifications. One of the members will be a current or retired peace officer with expansive knowledge and experience at a command rank. Six members will be members of the public with two, who according to Senate Bill 2, “have been subject

to wrongful use of force likely to cause death or serious bodily injury by a peace officer, or who are surviving family members of a person killed by the wrongful use of deadly force by a peace officer, appointed by the Governor.” The disproportion between people of color and White people is undeniable, especially now that everyone has a smartphone to share anything and everything with virtually the entire world. Assembly Bill 931, introduced by assembly member Carlos Villapudua, is another bill aiming to reform the way peace officers conduct themselves. The bill, if passed, will require other peace officers to intervene if any fellow officers are abusing their power. The bill says, “President Obama’s Task Force on 21st Century Policing found that teaching police peer intervention has a powerful influence on encouraging and supporting officers to intervene and prevent their colleagues from committing acts of serious misconduct and criminal behavior.” Although the bills won’t take effect until the next two years, they are evidence of the urgency in reforming the system that is meant to protect and serve its people. 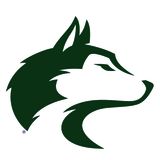