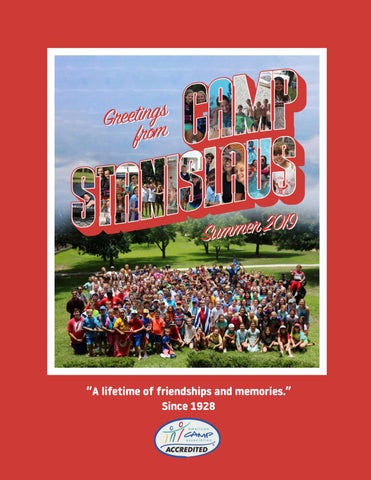 boys and girls ages 8-15. Camp Stanislaus is a day and resident summer camp for with the Brothers of the Founded in 1928, Camp Stanislaus operates in conjunction operated Saint Stanislaus Sacred Heart, a religious order of teaching Bro thers who have campers and counselors College since 1854. The mission of the camp is to provide e in the Catholic tradition with a safe and enjoyable recreational and learning experienc n its beautiful location on under the charism of the Brothers of the Sacred Heart. Give ide many water activities the Mississippi Gulf Coast, Camp Stanislaus is able to prov wakeboarding, canoeing, including swimming, sailing, skiiing, knee boarding, tubing, sports, arts and crafts, and fishing. Other camp activities include indoor and outdoor archery, rec hall, and much more! our campers to create While our main goal is to provide a good time, we also aim to allow urage one another, and new friendships, learn independence, improve social skills, enco a tradition passed down work hard to achieve their goals. Camp Stanislaus has become faces each year! from generation to generation and continues to welcome new

A Note From the

D I R E C TO R I would like to start by extending my sincere thanks to all the campers, parents, staff, Brothers, and volunteers for making this summer a fun, rewarding, and memorable experience! As is sit to write this note, I canâ&#x20AC;&#x2122;t help but reminisce about my time at Camp Stanislaus. I have been blessed with the opportunity to spend 11 summers here and hope to spend many more. Camp certainly has changed in those years and has seen significant growth aided by the introduction and reintroduction of many camp activities and traditions. These activities are wonderful but its truly the people that make Camp Stanislaus great. When I think of camp, the things that come to mind are the campers smiling faces and the lasting friendships I have made. This year was another camp for the record books with over 590 campers attending the 4 weeks of resident and day camp. It was also and exciting summer which saw the addition of STEM and computer coding camp. Along with the marine biology, water sports and father and son camp the specialty camps saw over 115 participants in 2019. Campers were able to enjoy a few new activity additions in 2019 as well. The addition of the arcade and game room gave us another activity on rainy days and the addition of a 2nd gaga pit to the yard area was enjoyed by everyone. As always, we are looking forward to updating existing and adding more activities next summer. I have to thank the campers for their positive attitudes and for always gave 100 percent in activities. We witnessed significant growth, shared many laughs and created many memorable moments this summer. I know many of you come to camp not knowing a soul but left with many friends. All in all, everything was a big success and I hope to build on that success next summer. Lastly, I need to convey a special thanks to our wonderful staff! We could have the nicest facilities and equipment in the world, but the thing that makes Camp Stanislaus truly great are our hardworking counselors and volunteers. You are the reason why our campers want to come back year after year. I wish you all a fantastic year and look forward to seeing each one of you next summer! Many Blessings, Sam Doescher

In 1861, the United States was torn apart by the Civil War. As a southern state, Mississippi naturally sided with the Confederacy. Several years prior in 1854, the Brothers of the Sacred Heart came to the United States from France with the intention of setting up a boarding school in Bay St. Louis, Mississippi. Within seven years of the school’s founding, the French Brothers became embroiled in the Civil War. Being of French origin and in the midst of an American war, the Brothers of the Sacred Heart “viewed [themselves] as neutrals and were not forced to take an allegiance.” Therefore, the school’s property was “supposed to be exempt from destruction or confiscation.” When Ship Island was taken and the Bay became occupied by Union forces, the Brothers “raised a French flag over the [school], declaring their neutrality.” The Brothers “whose house was traveling distance from New Orleans… had

received French flags from the French consul in New Orleans at the outbreak of the war.” On June 21, 1863, the Union troops landed on the beaches of Bay St. Louis. As a result, the Brothers of the Sacred Heart met with Admiral Farragut in the hope of coming to an agreement. Farragut granted that he would destroy neither the school nor the town, since he had deep admiration for the Brothers and their mission. En route to New Orleans, the two-hundred man Union Fleet unloaded onto the beaches and walked down what today is known as Union Street. To seal this treaty, Admiral Farragut gave the Brothers of Sacred Heart one of the oars used to make landfall on the beach. Today, the War Oar serves as a reminder to both the Brothers and the town that whether you are a Southerner, Northerner, or French, we are all one united people.

c i g a MShow Olym

The highest award given out at camp is the Brother Noel Character cup. This award is named in honor of Brother Noel Lemmon who served 30 selfless years as the director of Camp Stanislaus. The campers chosen to receive this award displays qualities such as enthusiasm, cooperation, integrity and a willingness to help others. Their presence at camp improves everyone elseâ&#x20AC;&#x2122;s experience.

A Note from the Ski Director

First of all, I would like to thank all the parents, staff, and campers for making my job so easy and enjoyable. Having worked as a senior counselor, head counselor, and now Ski Director has been absolutely awesome. I want to send out a special thanks to the best group of them all, the Sharks! Being the Ski Camp Director has been my most rewarding job at camp. I want to thank all the campers for making Ski Camp the best activity of all camp. Camp has taught me so much, and I have taken everything I have learned to my position as Assistant Director of Admissions and Assistant Director of Residency at Saint Stanislaus. I would love to have the opportunity to take you on a private tour of our school and show you how Saint Stanislaus have been thriving for over 165 years with a mission and values that remain relevant and inexhaustible. You can reach me by phone or email: (228) 467-9057, ext. 284 or pmaciel@ststan.com. Sincerely, Pedro Maciel

We hope to see you next summer!