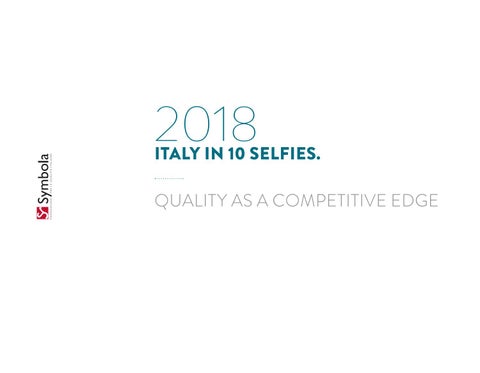 ITALY IN 10 SELFIES. QUALITY AS A COMPETITIVE EDGE

Tradition is not the worship of ashes, but the preservation of fire Gustav Mahler

To meet the challenges we are facing, starting from the UN “Sustainable Development Objectives”, we need to draw on our best resources. This is true for all countries, including Italy. Italians themselves put too small a price on their country’s strong points, as their opinion about Italy is definitely less upbeat compared to the rest of the world, according to a survey conducted by IPSOS. Yet, gaining a clear view of how things really stand is crucial to addressing our own countryspecific setbacks, including public debt as well as crisis-driven wounds, social inequalities, black and illegal economy, southern Italy’s backwardness, ineffective and often stifling red tape. Symbola’s Italia in 10 selfie (10 selfies portraying Italy) is meant to act as a memo, a sort of census of our talents, highlighting the results achieved through our competitiveness on the global markets, showing the quality drivers (environment, design, culture) that underpin such competitiveness and providing an insight into the outstanding performance of the individual Made in Italy brand industries (agrifoodstuffs, wood furnishing, mechanical engineering, fashion as well as other leading industries such as the pharmaceutical industry). Indeed, it is on these talents — i.e. the Italians that make up Italy — that we need to rely in order to move forward. This how Symbola sees and describes Italy in its works and portrays it in these yearend selfies. Italy, as captured and portrayed through these selfies, is made up of many businesses, communities, people, associations and institutions sharing a common drive for and will to pick up the quality challenge. A country combining ancient traditions with new technologies, research and digital innovation with craftsmanship, while binding and holding together culture, green economy and competitiveness. A country that also benefits from values — e.g. social cohesion, human capital enhancement, empathy with territories, beauty — which are the hallmark of Made in Italy products, albeit they are usually overlooked by mainstream economists. Some important exceptions can be found, however, such as the Nobel prize awarded to Richard H. Thaler for his studies on behavioural economy and nudge, underscoring the fact that open-minded attitudes towards often neglected variables are finally making their way through. A new more people-friendly economy model resembling the one outlined by Pope Francis in Laudato si’, where technological challenges and development are linked to the people’s dignity, vital communities and widespread well-being. What if (the best of) Italy could contribute to this economy model? What if this was the service we can provide to the world to face present and future challenges, starting from climate changes?

THE WORLD’S SECOND MOST COMPETITIVE COUNTRY IN THE MANUFACTURING SECTORS

DESIGN, THE DRIVING FORCE BEHIND MADE IN ITALY PRODUCTS CULTURE, BEAUTY AND CREATIVITY ACCOUNT FOR 16.7% OF GDP

THE WORLD’S SECOND MOST COMPETITIVE COUNTRY IN THE MANUFACTURING SECTORS According to the Trade Performance Index (the UNCTAD/WTO International Trade Centre indicator), Italy ranks second among top international trade players, with Germany taking the leading role. We rank first, second or third for competitiveness in foreign trade* in 8 macro-sectors out of 14 being considered, second only to Germany (9), with China following behind (5). Most notably, we rank first worldwide in fashion and leather and leather products, second in mechanical engineering, means of transport and textiles. Bearing out our country’s leading role in the global industry is the fifth place we hold in the world ranking of the manufacturing trade balance with $ 99.1 billion (G20, 2016). * Measured by considering 5 indicators: trade balance; pro capita exports; exports; level of diversification of markets and products.

ITALY’S LEADERSHIP IN EUROPE FOR ITS EFFICIENT USE OF RESOURCES IN MANUFACTURING PROCESSES Italy’s manufacturing system has proved to be one of the most innovative from an environmental perspective thanks to a more efficient use of energy and materials. Product being the same, firms producing Made in Italy products use less energy: with 13.7 tonnes of oil equivalent per € million produced, only the United Kingdom fares better (8.3 TOE) among EU’s Big 5, though the UK’s economy is more finance-driven); we are in fact more efficient than France (14.4 TOE), Spain (15 TOE) and Germany (17.1 TOE), scoring definitely better than Community average (16.6 TOE). When it comes to using raw materials per unit of product, Italy ranks second again behind the United Kingdom (223.4 tonnes per € million of output), using 256.3 tonnes of materials per € million, a figure well below that of France (340), Spain (356.7) and Germany (423.6). Italy’s figure almost halved as compared to 2008 (493.4).

The green economy in Italy already accounts for 2,964,000 green jobs (latest figure available, 2016), i.e. employees using “green” skills: 13.1% of total jobs nation-wide. In 2017, 320,000 new green jobs were expected to be created. In design and R&D corporate areas, almost 60% of job titles are green, bearing out the fact that innovation is a key green economy enabler.

DESIGN, THE DRIVING FORCE BEHIND MADE IN ITALY PRODUCTS Design is one of Italy’s key industries. Our country ranks second among Europe’s large economies — behind the United Kingdom (0.17%) — with design turnover accounting for 0.15% of the total economy, almost twice the European Union average (0.09%), much more than Germany (0.06%) as well as France and Spain (0.05%). In addition, with almost 10,000 projects Italy is Europe’s second largest power in terms of registered designs. As a whole, out of the 32 aggregate categories of the Registered Community Design (the Community instrument for registering industrial projects and designs) we rank among the top three countries in 22 cases in terms of absolute numbers. We hold first place in 4 cases (food, decoration items, musical instruments, logos), second place in 8 cases (textiles, travel goods, artificial textiles, interior design, household goods, advertising systems and store signs, sanitary, distribution, heating and conditioning systems, lighting equipment) and third place in 10 cases (cleaning products, packages and containers, watchmaking, means of transport, machinery, photographic, cinema and optical equipment, printing and office machines, hunting and fishing goods, construction and construction items, food preparation equipment).

EACH EURO PRODUCED BY CULTURE ACTIVATES ANOTHER 1.78 EURO ON AVERAGEIN THE REST OF ECONOMY. THE MULTIPLIERVARIES DEPENDING ON THE SECTOR.

CULTURE, BEAUTY AND CREATIVITY ACCOUNT FOR 16.7% OF GDP The culture sector accounts for € 89.9 billion, 6% of the wealth produced in Italy in 2016. About € 90 billion that sets in motion a further € 160 billion in the rest of the economy: € 1.78 for each euro produced by culture, totalling € 250 billion produced by the entire cultural pipeline (16.7% of GDP), with tourism benefitting the most from this lever effect. Culture and creativity also account for 6.1% of total jobs in Italy (1.5 million people). Italy has proven to be the preferred destination of non-European tourists travelling to the Eurozone. In 2016, it ranked first in terms of number of overnight stays of non-European tourists, with overnights in excess of 60 million, well ahead of Spain (46.5 million), France (36.6 million) and Germany (31.8 million). This trend applies most notably to small municipalities, where the percentage increase in the number of foreign tourists is almost three times greater as compared to the country as a whole.

05. Added value of the cultural and creative pipeline (businesses, institutions, non-profit organisations). Lever effect on the rest of the economy. Figures at 2016

AGRIFOODSTUFFS: LEADERS IN SUSTAINABILITY Italy’s agriculture ranks first among the major European countries in terms of reduction of climatechanging emissions. Indeed, with 678 tonnes of CO2 equivalent per € million produced we do much better than Spain (912), France (1,060), Germany (1,355), United Kingdom (1,412) and 28-Member EU average (1,073). We also use energy effectively, ranking third among the EU largest countries with 46 tonnes of oil equivalent per € million produced, after the United Kingdom and Spain. Italy is the only country in the world that can boast 859 DOP, IGP and STG products in this special ranking of taste and typical products, ahead of France (756), Spain (355), Greece (272), Portugal (197) and Germany (163). We are also leaders in food safety, with the lowest number of agrifoodstuffs showing chemical residues: 0.5%, i.e. almost 3.2 times lower than the European average (1.6%) and as many as 12 times lower than non-European products (5.7%). We are also second to none when it comes to the number of companies engaging in biological endeavours (72,154) the highest number of all the other large European countries. These characteristics further allow Italy to rank second (with € 31.6 billion) in Europe, after France (€ 32.7 billion) in terms of added value afforded by agriculture, forestry and fisheries.

PHARMA INDUSTRY: AMONG EUROPE’S LEADERS IN TERMS OF EXPORT GROWTH

With 30% of total exports from the EU to the rest of the world, Italy is Europe’s top exporting country in the wood furnishing industry, followed by Germany (20%), Poland (8%), Sweden, France, Denmark and Spain (5%) and the United Kingdom (4%), corporate environmental policies also playing a role to this end. For example, we are European leaders in the use of recycled wood for the production of chipboard panels, with the share of recycling materials standing at 90%. Italy also makes it to the podium in world production, ranking third after China (€ 115 billion) and the USA (€ 66 billion) in the production of furnishings (€ 21.2 billion).

08. % share of European exports of wood furnishing to non-EU countries, 2016

With a surplus totalling $ 57.7 billion, Italy’s machinery industry is part of the leading group of the trade balance international ranking, behind Germany ($ 104. billion), China ($ 83.6 billion) and Japan ($ 70 billion). Most exported products include agriculture and tobacco machinery, food industry machinery, machinery for the processing of wood, metal, plastic materials and non-metallic minerals (such as ornamental stones and ceramics), packaging and merry-go-round machinery, much appreciated for their low-consumption features, performance being equal.

FASHION: THE WORLD’S SECOND LARGEST MARKET SHARE Italy’s fashion industry proved more resilient to the crisis of recent years as compared to other European countries, strengthening its international leadership position, with corporate environmental policies also playing a role in this respect. We are the world’s second largest country in terms of market shares held (6.6%) after China (40.4%) and ahead of India (4.7%), Hong Kong (3.9%). Today, Italy also produces more than 1/3rd of the entire added value of the fashion industry in the 28-Member EU, three times more than Germany, four times more than France and Spain. As compared to other European leaders, Italy also managed to maintain the chain of production structure to a larger extent. Weaving and finishing, for example, both playing a pivotal role in the textile sector, still account for 1/3 rd of Italy’s fashion industry added value, unlike France — which is at the opposite side of the scale — where they dropped to 15%.

The partial or total reproduction and/or disclosure of the data and information contained in this research will be allowed only if the source is fully mentioned: Fondazione Symbola, Italy in 10 Selfies 2018. 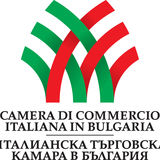