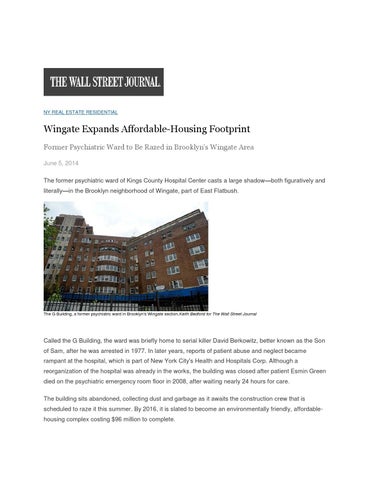 Called the G Building, the ward was briefly home to serial killer David Berkowitz, better known as the Son of Sam, after he was arrested in 1977. In later years, reports of patient abuse and neglect became rampant at the hospital, which is part of New York City's Health and Hospitals Corp. Although a reorganization of the hospital was already in the works, the building was closed after patient Esmin Green died on the psychiatric emergency room floor in 2008, after waiting nearly 24 hours for care. The building sits abandoned, collecting dust and garbage as it awaits the construction crew that is scheduled to raze it this summer. By 2016, it is slated to become an environmentally friendly, affordablehousing complex costing $96 million to complete.

Camba Housing Ventures Inc. will build a 256,330-square-foot building, dubbed Camba Gardens II. It will include about 300 apartments for low-income households earning below 60% of the area median income and for individuals and families moving out of city homeless shelters.

A rendering of affordable housing planned for the site. Dattner Architects

This follows the opening of Camba Gardens I, two affordable-housing buildings on Albany Avenue that opened in October. The two buildings have a combined 209 apartments, and amenities such as a spacious patio, a fragrant green wall in the lobby and a rooftop solar-panel system that provides about 45% of power to the common areas. The foundation of this housing complex, however, is in the basement, where several personnel from Camba, a nonprofit social-services organization, help residents with financial planning, job training and find health-care services at Kings County Hospital next door. "One of our goals is to demystify the concept and look of institutional housing," said David Rowe, executive vice president of Camba Housing Ventures. "We are not just building nice apartments with amenities, but a structure that provides in-house counseling and social services." Talks between Camba and the hospital aimed at bringing affordable-housing units to the site started in 2004 as part of a renovation plan for the facility. That resulted in the consolidation of services and the building of several new structures, including a new emergency room and cancer center. The G Building was closed in 2009.

The hospital "had this great opportunity to utilize unused land for good public use," said LaRay Brown, senior vice president of corporate planning, community health and intergovernmental relations at HHC. "This is a very successful model of how affordable housing and health care go hand in hand." The efforts have cleaned up the look of the southern portion of Wingate. In addition, SUNY Downstate Medical Center, which sits just south of Wingate's border, is building a new public health and academic building on Clarkson Avenue. Meanwhile Wingate Park, the primary outdoor recreational area for the community, will likely see its playground redone later this year. The park is home to the free Martin Luther King Jr. concert series held each summer.

"My mission is to keep the park safe and clean, but to also educate the youth about the environment," said Vivia Morgan, an area resident and driving force behind Friends of Wingate Park, a nonprofit group that helps organize park cleanups and other community events. Wingate was named after George Wood Wingate, a Union general in the Civil War who later was a cofounder of the National Rifle Association. The area was once called Pigtown for the pig farms abundant in the area until the late 19th century. Many Italian and Irish immigrants moved to the area in the early 20th century, and now it is mostly an African-American and West Indian neighborhood. Although the area hasn't gentrified as quickly as neighboring Crown Heights or Prospect Lefferts Gardens, there are plenty of old properties and empty lots turning into larger homes. Eli Karp, founder of HelloLiving, a Brooklyn-based development firm, said construction would start in a few weeks on a 40-unit condominium building on the northeastern corner of New York Avenue and Hawthorne Street.

"It's a quiet area that's a quick bike ride to Prospect Park," said Mr. Karp, who is looking to charge between $550 a square foot and $600 a square foot for the one-, two- and three-bedroom units that will have private elevators and terraces. Ms. Morgan, who also works as an organizer for the Laborers' Eastern Region Organizing Fund, a construction union, says she generally welcomes the new developments but hopes more locals can find work in the area's projects. "There are a lot of skilled workers in my community that need a job," she said. 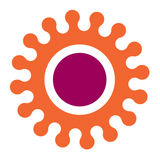