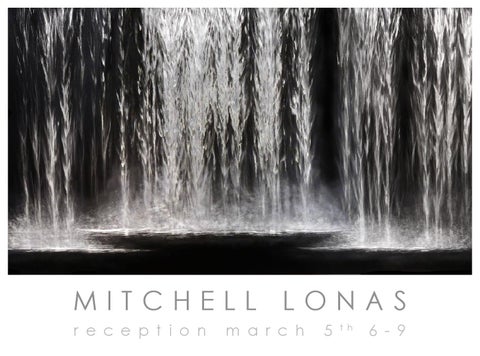 CONVERGENCE With technical virtuosity and a reverence for line, light, and materials, Mitchell Lonas distills the beauty and complexity of the natural world. In his latest body of work, he explores the phenomenon of murmurations, which occur at dusk when flocks of starlings take to the air in breathtaking formations. Ascending, diving, turning—never colliding—in a spectacular aerial ballet, the birds communicate in ways that are not fully understood. Lonas has witnessed these astonishing spectacles during his travels, and in recent years has studied them in order to portray them in his artwork. By refining his signature technique of incising and painting aluminum panels, he has developed a method to translate the motion and energy of murmurations into his compositions. By varying the angles, scale, depth, and density of his flowing, intuitive lines, he is able to convey the speed and precision with which the birds perform their dazzling, synchronized choreographies. Lonas studied art history at the University of Tennessee and is currently based in Asheville, North Carolina. His work is featured in significant private, public, and corporate collections. With passion, commitment, and extraordinary skill, he interprets an ever-expanding repertoire of visual motifs: waterfalls, feathers, nests, trees, root systems, and other organic forms. While working on the Murmurations series, Lonas was impressed by the starlings’ collaborative teamwork, a collective consciousness in which thousands of individual birds act in tandem. “It’s the epitome of self-organization and shared perspective,” he observes. “I think it shows us how human beings might work together in a similar way to find a greater good.” Across his many series, Lonas’ artworks are distinguished by his strikingly original technique and vision. Atop a mattefinish background, his arcing, incised lines engage in a dialogue with negative space and send cascades of prismatic light throughout the exhibition environment. As viewers regard the pieces from different vantage points, these sprays of light appear to dance and flow, moving as the viewer moves, turning the act of perception itself into a mesmerizing interactive experience. United by his technical know-how and deep love of nature, Lonas’ compositions impart a sense of invigoration, uplift, and wonder.