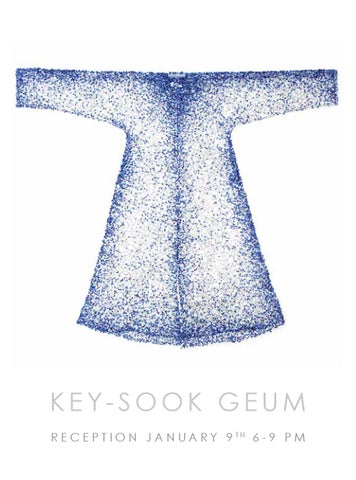 LIVING ENERGY In Living Energy, Key-Sook Geum’s fourth solo exhibition at Callan Contemporary, Eastern and Western notions of form and shadow, positive and negative space, unite. In a ravishingly beautiful suite of sculptural objects, Geum weaves together delicately shaped webs of gold and black wire with pearl, coral, amber, and crystal beads, transforming simple but luxuriant materials into a network of intersecting lines, planes, and curves. Working in her studio in Seoul, South Korea, Geum adapts simplified forms from ceremonial dresses, jackets, and vests of 17th and 18th Century Korea and the Qing Dynasty of China (1644-1912). “The shapes and styles of the costumes are interesting to me,” she explains, “because they tell many stories about the people who wore them: their lives and thoughts, aesthetics and philosophies.” Geum’s artworks, including major commisions for Argo Group and Royal Caribbean International, are included in notable private, corporate, and museum collections and have been exhibited in New York City, Chicago, Berlin, Vienna, Hong Kong, Tokyo, Katmandu, and other cultural hubs worldwide. A professor of textile arts and fashion design at the College of Fine Arts, Hongik University (Seoul), she is fluent in the idioms of traditional Asian aesthetics, contemporary art, and haute couture. While the semiprecious stones in her sculptures impart an opulent materiality, the pieces are highly conceptual, symbolic, and attuned to spiritual and humanistic ideals that resonate across cultures. “I think many people are interested in visible things,” she notes, “while invisible but more important things are easily ignored. Through my works, I want to express visible features and invisible thoughts or philosophies at the same time.” One way Geum achieves this goal is through her sculptures’ rich interplay of light, form, and shadow. Whether wall-based or as hanging mobiles, they are exquisitely responsive to variations in natural and directional lighting, sending cascades of lattice-like shadows and prismatic light across the spaces in which they are installed. The shadows move subtlely as the forms’ intricate contours flutter on air currents in the room, quivering like flower petals activated by a gentle breeze. By finessing the dialectic between material and immaterial, static and kinetic, the artist invokes the Asian concept of “qi,” the life-breath or living energy that vibrates within our awareness. In these immaculate forms, Geum invites viewers into a world of contemplation and tranquility, in which distinctions “between the outer shape and inner concept” dissolve. RICHARD SPEER