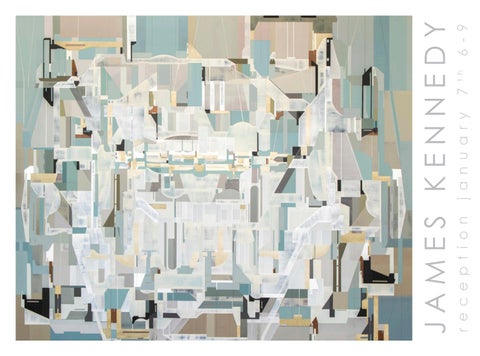 syn•tac•tic James Kennedy’s instantly recognizable visual language—exuberant forms engaged in a complex spatial conversation— communicates with viewers via a highly developed aesthetic grammar. In syn•tac•tic, his third exhibition with Callan Contemporary, the artist presents a suite of compositions that integrate the serene rhythms of geometric painting with the emotive intensity of gestural abstraction. With their nuanced textures and chromatic harmonies, these process-intensive acrylic paintings are built up from dozens of layers of delicate glaze-work and incised lines. In the tradition of Arshile Gorky, Hans Hofmann, and Cy Twombly, Kennedy has evolved a profoundly personal geometric syntax, which affords seemingly effortless connections between surface, shadow, and the dynamic placement of shapes within the picture plane. The finished works invigorate the viewer’s eye with a push/pull relationship that is both conceptually and viscerally involving. Born in Northern Ireland, Kennedy studied painting at the Royal Scottish Academy in Edinburgh, where he was also active in the worlds of dance and theater. Now based in New York City, he exhibits with leading galleries and art fairs internationally and is represented in prestigious corporate collections, including Corcoran Group, Saatchi &amp; Saatchi, St. Regis Hotels, and Nordstrom; and private collections including the late Pulitzer Prize-winning playwright Edward Albee. Last spring, the artist was the subject of a solo exhibition, James Kennedy: Shape-Shifting, at the John Hartell Gallery at Cornell University. In his curatorial statement for that show, visiting associate professor Mark Morris wrote: “Pattern is important to Kennedy’s work, as is craft and the character of linework: incised, dashed, floating on paint...” In Kennedy’s new paintings at Callan Contemporary, compositional elements integrate seamlessly, as in a mathematical equation that can be solved in only one possible way. The lines connecting the forms have an organicism of joinery and armature that is at once architectural and anatomical; each shape is akin to an individual character acting within an operatic pictorial drama. “Some people see these as very musical paintings,” Kennedy notes, “but to me it’s a nonspecific language—this linear vocabulary that abstains as much as possible from any referential stimulus.” Above all, the shapes in these artworks are intrinsically expressive, not merely formalist. “For all their precision,” he concludes, “the paintings are never ‘slick.’ I always want them to have an emotional drive.” Richard Speer