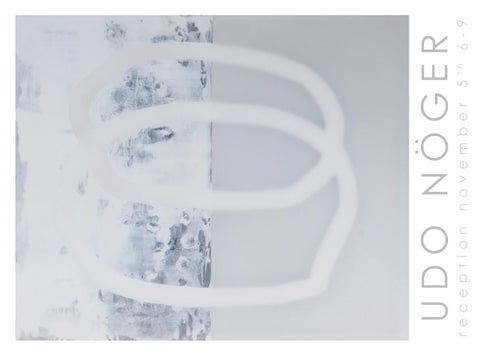 SUBLIME Callan Contemporary is pleased to announce its first solo exhibition of celebrated painter Udo Nöger. Born in Germany and now based in San Diego, Miami, and Geneva, Nöger is known for his luminous abstract paintings, whose primary medium is nothing less than light itself. With his innovative, process-intensive technique, the artist creates powerfully reductivist compositions in a seemingly infinite range of whites and silvery grayscale tones. While the paintings evoke the immaculate austerity of minimalism, they share a closer affinity with the Arte Povera movement of the 1960s and 70s, for Nöger has long been interested in transcending the limitations of the painted canvas and expanding its possibilities. “I had this idea to open up the canvas,” he reflects. “For me it’s very necessary that I’m not sitting in front of a canvas and filling it up with forms; I’m more interested in the space and the endless possibilities of what’s underneath the canvas. I don’t need color anymore; I’m using light itself. The light is producing the painting.” Nöger has exhibited internationally, with critically acclaimed shows in cultural capitals such as Paris, Madrid, Vienna, Berlin, Milan, Hong Kong, Toronto, New York, and Los Angeles. His paintings are included in the permanent collections of the Metropolitan Museum of Art (New York), Art Institute of Chicago, Margulies Collection (Miami), Bellagio Hotel (Las Vegas), Haus der Kunst (Munich), Kunsthalle Bielefeld (Bielefeld, Germany), as well as in significant public, private, and corporate collections around the world. Nöger began his career steeped in the traditions of German neo-expressionist artists such as Anselm Kiefer and George Baselitz, but in the early 1990s he left behind the figure, the heavy layers, and the dark colors that had characterized his early work. Reducing his color palette to an ethereal spectrum of white tones, he began creating artworks in what has become his signature style. For all their seeming spontaneity of gesture and form, the works are meticulously choreographed. Superimposing three to four layers of tautly stretched canvas (dipped in mineral oil to heighten translucency), Nöger embeds painted gestures and cut-out shapes in the central layers, as through a succession of paper-thin screens or theater scrims. This allows light to enter the picture plane and travel through it in three dimensions – glowing, refracting, ricocheting in a veritable dance of light – and then to exit, having shared the journey with the eye of the viewer. Dynamic and elegant in equal measure, the paintings exude a visual charisma and an intense, immaculate beauty.