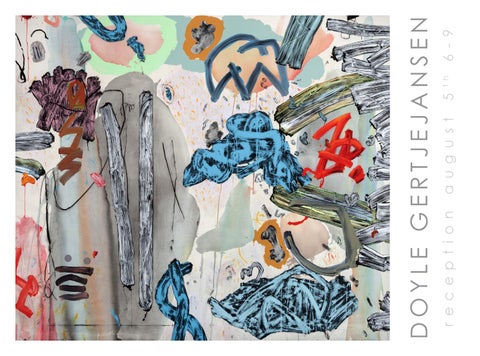 FAITH AND REASON II In Doyle Gertjejansen’s exhibition, Faith and Reason II, at Callan Contemporary, the artist offers both a critique and celebration of painting itself. Integrating conceptual rigor and jazz-like improvisation, Gertjejansen’s mixed-media paintings guide viewers on a dynamic journey through the trajectory of modern and contemporary art. By turns knowing and naïve, ironic and earnest, they address contemporary themes on a subtextual rather than didactic level, always retaining a fundamental wit and whimsy. Gertjejansen has developed a visual vocabulary in which disparate motifs float, jostle, arch, and vibrate in compositions that counterpose jagged lines with sinuous curlicues, earth tones with hues of bracing vividness. “My work is full of binary juxtopositions and imbalances,” he notes: “action and reaction; arbitrary and planned; the authentic and the contrived.” What interests him is the tenuous border between polarities, “and how these ideas flow through us as people—how we translate and synthesize them into a worldview that makes sense.” Gertjejansen’s fluency in the discourse of aesthetics, particularly in post-War through present-day abstraction, owes in part to his distinguished parallel career in the academy. An MFA graduate in painting and art history from the University of Minnesota, he went on to teach for four decades at the University of New Orleans, thirteen years of which he chaired the school’s Department of Fine Arts. A recipient of a National Endowment for the Arts Fellowship, he has exhibited his paintings, drawings, monotypes, and sculptures in solo and group exhibitions around the world, with acquisitions into prominent private, corporate, and institutional collections. As a scholar and practicing artist, he has sustained a lifelong interest in mark-making dually as a physical act and signifier. In kinship with Roy Lichtenstein’s well-known Brushstroke series—as well as with contemporary artists Gerhard Richter, David Reed, Jonathan Lasker, and Fiona Rae—Gertjejansen explores the relationship between paint-qua-paint and paint as a stand-in for pictographic and intellectual constructs. That he investigates this heady terrain with such visceral power is one of his most startling achievements. While his artworks most directly hail from the lineage of postmodern pastiche, each composition is the product of raw, unmediated impulse. He interjects recurring images—clouds, raindrops, and other pointedly anti-aesthetic marks—into his tableaux, alluding to the possibility of narrative. A hallmark of his technique is a sensual and time-intensive process of deploying liquid graphite to create the uncanny illusion of gestures within a gesture. Across his varied and ever-evolving oeuvre, Gertjejansen marries sophistication and accessibiity, gravitas and humor, inviting viewers into undifferentiated realms of knowledge and sensation.