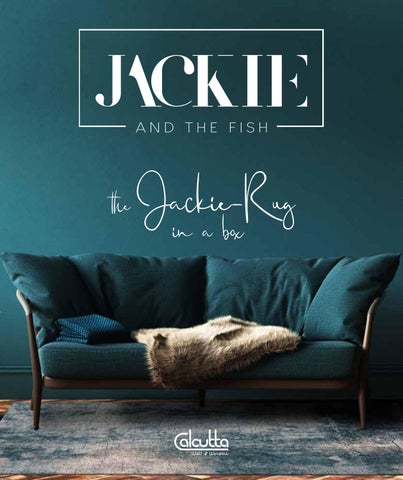 Calcutta design studio IN THE

The Calcutta team has succeeded with highest distinction in developing this brand new leading rug concept: A rug that comes like a present on a serving dish, wrapped and lightly scented. A rug that is easy to handle, to move ànd to install. A rug with a decorative backing, light, washable in a washing machine at 30°, foldable and therefore easy to clean, maintain and stow away, even by one single person. A rug that is lying flat on the floor showing no tensions and comes with an anti-slip underlay. This makes stepping on safe or rolling over it easier and minimizes trip hazards. It comes in a box, wrapped in silk paper together with the underlay, as if it were a hand bag. Because it’s light and foldable, it’s easier and more efficient to transport, especially by the modern courier services or by the consumer. Thinking out of the box results in having a lighter ecological footprint...

Being light and supple, the Jackie-rug can also be used as an acoustic design tapestry. Made of seven different polyester yarns, its composition allows recycling. It is also durable. The the and own

Jacquard weave gives a structured look and designs are exclusive. The sizes are customizable you can choose any colour. You can even submit your design to develop.

Lighten up your floor and choose a jackie and the fish design floor!

About Jackie and the Fish In January 1961, the new residents of the White House were young, sophisticated and attractive. Many Americans considered the Kennedys as a breath of fresh air. They abolished several old social conventions to create a more casual, comfortable atmosphere.

&quot;Jackie&quot; refers to Jackie Kennedy, the iconic First lady. She was known for her unmistakable style and flair for interior design. Though, or perhaps because she knew exactly what she wanted, she decided to work with French interior designer Stéphane Boudin to refurbish and redecorate the private quarters of The White House. Together with home decorator Dorothy &quot;Sister&quot; Parish, she tried to make these parts more functional, more family suited and more zen. She also worked with furniture expert Henry du Pont to advise her in her choices.

Jackie &amp; The Fish is a lifestyle brand, which not only helps people who know what they want, as Jackie Kennedy, but also people who are glad to follow advice.

The first rug collection of Jackie &amp; The Fish is inspired by nature and the constant impulse of Man to organize it. Chaos is said to be nature without order. Man tries to understand and organize it through mathematics, geometry, landscaping, music, poetry, architecture, philosophy, science in general.

Traditional Persian rug design often reverts to geometry, golden numbers, gardens, etc… Some of Persia’s greatest scholars were scientists as well as poets. They used poetic freedom to try to orden and explain nature to us, little fish.

Brasília was a planned city developed by lúcio costa, oscar niemeyer and joaquim cardozo in 1956 in a scheme to move the capital from rio de janeiro to a more central location. The city&#39;s design divides it into numbered blocks as well as sectors for specified activities, such as the hotel sector, the banking sector, and the embassy sector. Brasília was inscribed as a unesco world heritage site in 1987 due to its modernist architecture and uniquely artistic urban planning. It was named &quot;city of design&quot; by unesco in october 2017 and has been part of the creative cities network since then.

Our dancer design is inspired by the moves of the capoeira, by the concrete buildings of the city as well as by the surrounding nature.

“Hey, it’s gonna be a hot one today 85 in town, 95 in the Valley I suggest you all pile in the old jalopies And get on out to that beach It’s gonna be a cool 75 in the air, 70 in the water And we got a swell from the West today at 3 to 5 feet So grab your sticks and let’s go surfing Owooooh”

“Dance with the waves, move with the sea. Let the rhythm of the water set your soul free.” Christy Ann Martine

There are different types of gardens; each one is influenced by time, place, and science. Garden design was inspired by the scientific results of a particular age. It transforms the practical need of people into beautiful edifice and provides users with comfort and convenience. Gardens are characterized by the deep thinking of geometry and beauty, as in Andalusia, Istanbul, Iran, Afghanistan, and Italy.

Besides simplicity, shapes in geometric gardens have unity and diversity. These foundations can achieve harmony. In Persian rugs you find traces of this harmony. As for Omar Khayyam: 18 May 1048 – 4 December 1131 , he was a Persian mathematician, astronomer, philosopher, and poet. As a mathematician, he is most notable for his work on the classification and solution of cubic equations. There is a tradition of attributing poetry to Omar Khayyam, written in the form of quatrains. And yes, he has a lot to tell us.

This geometric composition has its roots in the Bauhaus movement. There was criticism concerning the apprenticeship programs offered at the school. The majority of female students at the Bauhaus specialized in weaving. However, the school did not offer apprenticeship certificates in weaving, which meant that it was impossible for women to register their trade with the Chamber of Trade. This prevented them from acquiring master’s diplomas, which placed limits on the future possibilities of their careers.

Gunta Stölzl, was born on March 5, 1897. She attended the Bauhaus, where she studied weaving and textiles. After graduating from her program, Stölzl returned to the Bauhaus to lead the weaving workshop in 1926. She became the first official female department head, and was the only female master at the school. Stölzl played a crucial role in the development of the school’s weaving workshop, as she focused on designing and weaving abstract textiles for commercial and industrial use. With a wink, we called our design “Frauhaus”.

Organic shapes such as bubbles and lines compose this playful mid-century design.

Before the ocean and the earth appeared, before the skies had overspread them all, the face of Nature in a vast expanse was naught but Chaos uniformly waste. It was a rude and undeveloped mass, that nothing made except a ponderous weight; and all discordant elements confused, were there congested in a shapeless heap.

“One must have chaos in oneself to be able to give birth to a dancing star”. Friedrich Nietzsche

Out of the chaotic mass, a design emerges, as a filigree in form of a Persian medallion. The pattern is laid out on a contrasting field, interspersed by a shiny metallic thread.

Ammonites typically lived for two years, although some species survived beyond this and grew very large as pictured above. Evidence of their short lives is estimated by looking at their living relatives - the nautilus. These creatures exist within modern day seas and possess many characteristics similar to ammonites Like the nautilus, ammonites retained their original shell throughout their life. However, it’s worth noting that in comparison to modern day nautili which live in cold, deep water, ammonites preferred warm shallow waters and may have had a higher metabolism. Consequently, it’s possible that ammonites could reach larger sizes far quicker than modern day nautili. They are frequently found as fossils, witnesses of pre-historic time.

Life is a continuous circle With no opening and no ending Like the brighter days and the darker nights Repeating itself It is one of the wonders made by the Nature’s Creation.

The mood of Porto varies in accordance with the sun and the rain. On days when the sun is absent, the gray granite tinges the city with sadness. You can take on the color of Porto each day. When there is sun, Porto awakes as cheerful as a teenager. The light of Porto is a warm yellow that penetrates the bodies of those who stand at the window.

When visiting my relatives in Amsterdam, my uncle Cees would bring me to the Rijksmuseum. In room 26 he showed me the exquisite floral still lives of the Dutch Masters. The particularity is that you will see a composition of flowers that do not bloom at the same time!

An inundation. This libation to parched earth has been a meditation since birth; to ponder under the pitter-patter hiss and swish of exponential scales At the wrongness of raindrops in a sunbeam.

Saadi of Shiraz, born 1210, died 1291 or 1292, was a major Persian poet and prose writer of the medieval period. He is recognized for the quality of his writings and for the depth of his social and moral thoughts. Saadi is widely recognized as one of the greatest poets of the classical literary tradition, earning him the nickname “Master of Speech” or simply “Master” among Persian scholars. He has been quoted in the Western traditions as well. Bustan is considered one of the greatest books of all time

The images in Bustan are delicate in nature and soothing. Such is the design of this rug. Soft greys, delicate ochres, soothing blues and endless sandy beiges, woven in intricate oriental floral patterns.

Carefully crafted rugs, made in a rich mix of noble linen, glossy viscose, solid polyester and soft cotton. Flemish skies change all the time, from tranquil blue through clouded grey, from the red tannin lining of sunset into a moonless night.

The first rug collection of Jackie & The Fish is inspired by nature and the constant impulse of Man to organize it. Chaos is said to be nature without order. Man tries to understand and organize it through mathematics, geometry, landscaping, music, poetry, architecture, philosophy, science in general. Traditional Persian rug design often reverts to geometry, golden numbers, gardens, etc… Some of Persia’s greatest scholars were scientists as well as poets. They used poetic freedom to try to orden and explain nature to us, little fish.