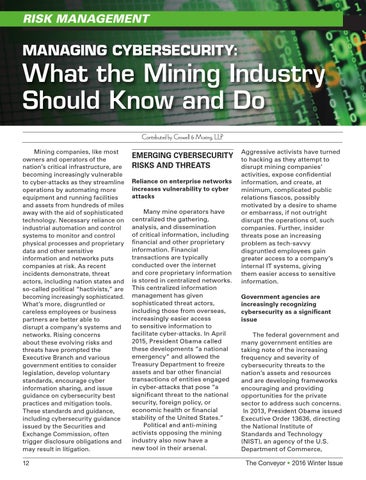 What the Mining Industry Should Know and Do Contributed by Crowell & Moring, LLP Mining companies, like most owners and operators of the nation’s critical infrastructure, are becoming increasingly vulnerable to cyber-attacks as they streamline operations by automating more equipment and running facilities and assets from hundreds of miles away with the aid of sophisticated technology. Necessary reliance on industrial automation and control systems to monitor and control physical processes and proprietary data and other sensitive information and networks puts companies at risk. As recent incidents demonstrate, threat actors, including nation states and so-called political “hactivists,” are becoming increasingly sophisticated. What’s more, disgruntled or careless employees or business partners are better able to disrupt a company’s systems and networks. Rising concerns about these evolving risks and threats have prompted the Executive Branch and various government entities to consider legislation, develop voluntary standards, encourage cyber information sharing, and issue guidance on cybersecurity best practices and mitigation tools. These standards and guidance, including cybersecurity guidance issued by the Securities and Exchange Commission, often trigger disclosure obligations and may result in litigation. 12

Emerging Cybersecurity Risks and Threats Reliance on enterprise networks increases vulnerability to cyber attacks Many mine operators have centralized the gathering, analysis, and dissemination of critical information, including financial and other proprietary information. Financial transactions are typically conducted over the internet and core proprietary information is stored in centralized networks. This centralized information management has given sophisticated threat actors, including those from overseas, increasingly easier access to sensitive information to facilitate cyber-attacks. In April 2015, President Obama called these developments “a national emergency” and allowed the Treasury Department to freeze assets and bar other financial transactions of entities engaged in cyber-attacks that pose “a significant threat to the national security, foreign policy, or economic health or financial stability of the United States.” Political and anti-mining activists opposing the mining industry also now have a new tool in their arsenal.

Aggressive activists have turned to hacking as they attempt to disrupt mining companies’ activities, expose confidential information, and create, at minimum, complicated public relations fiascos, possibly motivated by a desire to shame or embarrass, if not outright disrupt the operations of, such companies. Further, insider threats pose an increasing problem as tech-savvy disgruntled employees gain greater access to a company’s internal IT systems, giving them easier access to sensitive information. Government agencies are increasingly recognizing cybersecurity as a significant issue The federal government and many government entities are taking note of the increasing frequency and severity of cybersecurity threats to the nation’s assets and resources and are developing frameworks encouraging and providing opportunities for the private sector to address such concerns. In 2013, President Obama issued Executive Order 13636, directing the National Institute of Standards and Technology (NIST), an agency of the U.S. Department of Commerce, The Conveyor • 2016 Winter Issue 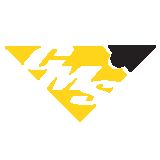