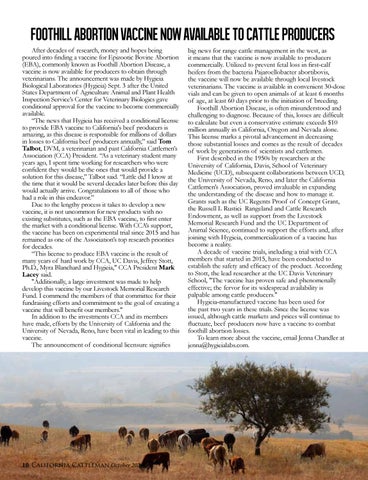 foothill abortion vaccine now available to cattle producers After decades of research, money and hopes being poured into finding a vaccine for Epizootic Bovine Abortion (EBA), commonly known as Foothill Abortion Disease, a vaccine is now available for producers to obtain through veterinarians. The announcement was made by Hygieia Biological Laboratories (Hygieia) Sept. 3 after the United States Department of Agriculture Animal and Plant Health Inspection Service’s Center for Veterinary Biologics gave conditional approval for the vaccine to become commercially available. “The news that Hygieia has received a conditional license to provide EBA vaccine to California&#39;s beef producers is amazing, as this disease is responsible for millions of dollars in losses to California beef producers annually,” said Tom Talbot, DVM, a veterinarian and past California Cattlemen’s Association (CCA) President. “As a veterinary student many years ago, I spent time working for researchers who were confident they would be the ones that would provide a solution for this disease,” Talbot said. “Little did I know at the time that it would be several decades later before this day would actually arrive. Congratulations to all of those who had a role in this endeavor.” Due to the lengthy process it takes to develop a new vaccine, it is not uncommon for new products with no existing substitutes, such as the EBA vaccine, to first enter the market with a conditional license. With CCA’s support, the vaccine has been on experimental trial since 2015 and has remained as one of the Association’s top research priorities for decades. “This license to produce EBA vaccine is the result of many years of hard work by CCA, UC Davis, Jeffrey Stott, Ph.D., Myra Blanchard and Hygieia,&quot; CCA President Mark Lacey said. &quot;Additionally, a large investment was made to help develop this vaccine by our Livestock Memorial Research Fund. I commend the members of that committee for their fundraising efforts and commitment to the goal of creating a vaccine that will benefit our members.&quot; In addition to the investments CCA and its members have made, efforts by the University of California and the University of Nevada, Reno, have been vital in leading to this vaccine. The announcement of conditional licensure signifies

big news for range cattle management in the west, as it means that the vaccine is now available to producers commercially. Utilized to prevent fetal loss in first-calf heifers from the bacteria Pajaroellobacter abortibovis, the vaccine will now be available through local livestock veterinarians. The vaccine is available in convenient 30-dose vials and can be given to open animals of at least 6 months of age, at least 60 days prior to the initiation of breeding. Foothill Abortion Disease, is often misunderstood and challenging to diagnose. Because of this, losses are difficult to calculate but even a conservative estimate exceeds $10 million annually in California, Oregon and Nevada alone. This license marks a pivotal advancement in decreasing those substantial losses and comes as the result of decades of work by generations of scientists and cattlemen. First described in the 1950s by researchers at the University of California, Davis, School of Veterinary Medicine (UCD), subsequent collaborations between UCD, the University of Nevada, Reno, and later the California Cattlemen’s Association, proved invaluable in expanding the understanding of the disease and how to manage it. Grants such as the UC Regents Proof of Concept Grant, the Russell L Rustici Rangeland and Cattle Research Endowment, as well as support from the Livestock Memorial Research Fund and the UC Department of Animal Science, continued to support the efforts and, after joining with Hygieia, commercialization of a vaccine has become a reality. A decade of vaccine trials, including a trial with CCA members that started in 2015, have been conducted to establish the safety and efficacy of the product. According to Stott, the lead researcher at the UC Davis Veterinary School, &quot;The vaccine has proven safe and phenomenally effective; the fervor for its widespread availability is palpable among cattle producers.&quot; Hygieia-manufactured vaccine has been used for the past two years in these trials. Since the license was issued, although cattle markets and prices will continue to fluctuate, beef producers now have a vaccine to combat foothill abortion losses. To learn more about the vaccine, email Jenna Chandler at jenna@hygieialabs.com.