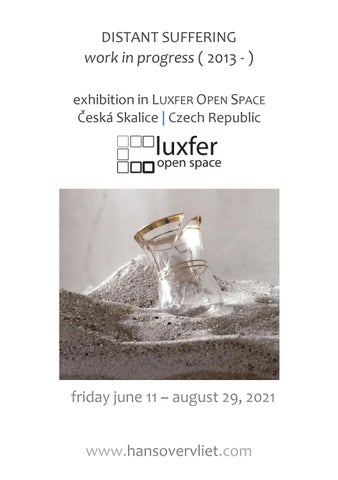 Luxfer Contemporary art space The eastern Bohemian Luxfer Gallery was founded in March 2010, and focuses on the local presentation of contemporary art. It thus aims to help decentralize the Czech art scene. The experimental platform Contemporary art space which houses Luxfer Gallery, Luxfer Open Space & Residency and the Luxfer Open Space Academy (LOSA!). The organisation gives contemporary artists opportunities to experiment and do research, and thus plays an important role in the communication between the center and the region. The association organizes exhibitions of contemporary art and educational activities which aim to improve public aware-ness of contemporary art. They organize art residencies, symposia and run studios. The collective of organizers and curators collaborates on similar projects, both in the Czech Republic and abroad, and since its founding has organized almost 50 solo exhibitions which included major Czech artists, local as artists, but also artists from abroad.

distant suffering is an ongoing body of art that investigates the role of the media in the representation of military violence and memory. As a reporter, Overvliet was an eyewitness to the events in the Middle East during the 1980s. These experiences resonate in this body of work. With the production of the art-series DISTANT SUFFERING (2013-), Hans Overvliet questions the role of the media consumer, yet equally his own role as an artist. By constructing these works of existing media images, Overvliet allows us to view these images through an entirely different lens. Most often, the artist’s intended themes include the multiplicity of visual culture and its mindless consumption. Overvliet’s works ask from the spectator to gaze intently at them, in order to instigate in the viewer a new awareness about the images around them.1 From a thematic perspective distant suffering is about art, violence, war and destruction as presented in media production, media consumption, fading remembrance / memory, the politics of aesthetics, and ownership of the event versus its documentation. The title of distant suffering derives from the book Distant Suffering, Morality, Media and Politics by Luc Boltanski2 – indeed the brother of. Overvliet employs an apparently controversial strategy: that of poetic images, inspired by the words of Percy Bysshe Shelley (1792 – 1822): Poets are the unacknowledged legislators of the world.3 The transition into art is inspired by the Dutch Artist Armando: It is the beauty of evil, ‘die Schönheit des Bösen’ ( … ) This beauty calls me to transfer the ‘evil’ into the innocent, because of the amoral domain of art.4 1

Julia Mulié , Assistant Curator Vleeshal, Middelburg Cambridge Cultural Social Studies | ISBN 97-8052-1573-894 The book was originally published in 1923 by Alfred A. Knopf. 3 In A Defence of Poetry, an essay written in 1821 and first published posthumously in 1840 in Essays, Letters from Abroad, Translations and Fragments by Edward Moxon in London. 4 Armando, Acknowledgements About Beauty, 1987 2

i.d. of a shared key 2015 presentation in progress work

selection from 215 old, cleaned tin cans, spoke of a bicycle wheel, print of a key in plaster in the shape of a gold bar inspired by Pity the Nation, Lebanon at War by Robert Fisk. The chapter The Keys of Palestine reverberating with my own experiences in Palestine, inspired this work.

documentation of a cloud 2015 work place

cloud, painted with rubble from the spot in Gaza where - the by Israelian army -annihilated Mishal Cultural Center was situated, in extremely diluted East-Indian ink & Arabic gum on Simili Japon, 225 grs. 96,0 x 65,0 cm. in wooden frames, each 97,9 x 66,3 x 4,5 cm. left: dyptych ( 2018 ) with rubble of ruimteCAESUURNL right: ( 2021 ) with rubble of Luxfer Open SpaceCZ with the match/rubblebox Roman send to me

2 platters Ø 45 cm. made by Frank ÅsnesNO one crushed and one restored in the traditional Japanese Kintsugi style video including the sound of the crushing platter

200 full colour A1 posters on 135 gr. MC paper with the paraphernalia of ‘travelling / mobility’, placed in public spaces in more than 100 places all over the world, qr-code linking to the main text, catalogue / book in the making, following the process on www.hansovervliet.com you’ll find the catalogue. Photo: ©2021Roman Rejhold.

Colophon In my diary, which I kept during the residency, I wrote: I am living the privilege to be invited by Roman Rejhold and Kate Štroblová of LUXFER OPEN SPACE in the town of Česká Skalice in the Czech Republic for a residency, an artist talk and an exhibition. Today, July 10, 2021, I still can hardly comprehend what paradise time all the people of LUXFER, especially Roman, have given to my beloved wife Willy and me. So, within the given wretchedness of our language: from deep in both our hearts we really thank you very, very much. Fortunately, we will see each other during the finissage on August 28, 2021. The wonderful photos in this catalogue are made by Lukáš Jasanský. A short introduction for non-Czech people: The artistic duo of Lukáš Jasanský and Martin Polák has played a central role in Czech art of the past twenty years, contributing fundamentally to redefining the position of photography within contemporary Czech art. They have created some of the most lucid and artful commentaries on various phenomena of Czech life. Indeed, this is the quality LUXFER OPEN SPACE offers the art world. Last but not least: the exhibition maker Willy van Houtum shifted the individual art-works into a well received exhibition. Midddelburg, July 14 2021 Hans Overvliet