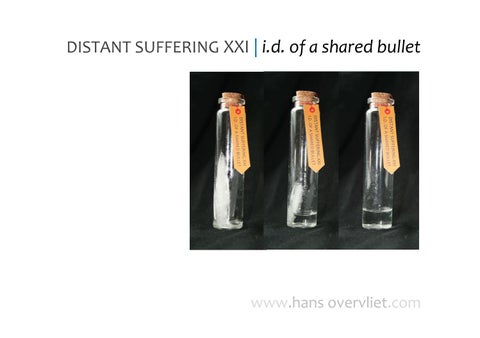 i.d. of a shared bullet The letter/number combination 'AK47’ - designed by Mikhail Kalashnikov is one of the most used abbreviations in conflict reporting. The image of this automatic assault rifle is perhaps one of the most recognizable of all guns. An Oxfam Novib press release states that in 2006 more than 100 million AK47 rifles - whether or not illegal - are in circulation in the world. This work - an infinite series of melting ice bullets - is part of DISTANT SUFFERING (2013-) an art series by Dutch visual artist Hans Overvliet.

The ice bullets are made using a mold that claims to be a magazine of an AK47, produced by Etsy in Hong Kong, touted as "Hot Bullet Shape Mode." The original bullet of 7.62 x 39 mm, was invented by N.M. Elizarov and B.V. Semin. Overvliet developed the first badge of this artwork in December 2019. It was presented for the first time on June 11, 2021 during his exhibition and residency in Luxfer Open Sace in Česká Skalice in the Czech Republic. The decay starts as soon as the ice bullets leaves the freezer: they start to melt. start to melt. Because of the energy

bullets leaves the freezer: they start to melt. Because of the energy that the ice bullet withdraws from its environment, it changes its form forever: from a metaphor of a life-threatening object to a life-creating element: water. The owner of the work is - apart from the artist himself - actually the only one who has seen the art work in an "original" state. The rest of the world has to trust that the "story" is based in reality, even on the truth, that this water was once an ice bullet. So the only a realistic image is anchored in the owners memory as long as she / he / x remembers that. Part of the concept is loosely based on a work by Ulay from 1975 – 1976. On a

a work by Ulay from 1975 – 1976. On a series of performances the artist called a finish to the whole photographic issue: Fototot (Photo Death), several actions in which Ulay utilized photosensitive paper to create unfixed selfportraits that would disappear shortly after a gallery’s lights were switched on. The time it takes for the ice bullets to melt is many times shorter than the time and energy required to create it. A recurring metaphor in Overvliet's work: destruction is often easier than creation. On a strictly personal level, it also shows the physical dynamics of Overvliet’s present; him being 68 years old and survived

vliet’s present; him being 68 years old and survived cancer with a lot of side effects. The vulnerability and transience of himself and others around him are quite realistic facts in his life. Finally, one of the themes Overvliet kept at work for half his life is trying to create a work of art that is not bound to an object. With DISTANT SUFFERING XXI | i.d. of a shared bullet he comes close to that objective. At the same time of course, as an autonomous art work it is a total failure: without the labour of other people – working in the power plant, maintainning the grid, mining coal etc. – the work cannot exist at all.

Hans Overvliet, since 2013, investigates the role of the mass media with regard to reporting on (military) violence and the fading memories of violence by means of his ongoing artseries: DISTANT SUFFERING. As a reporter, Overvliet was an eyewitness to the events in the Middle East during the 1980s. These experiences resonate in DISTANT SUFFERING. The title of the project is taken from Luc Boltanski’s book Distant Suffering, Morality, Media and Politics. Overvliet employs an apparently controversial strategy: that of poetic images, inspired by Percy Bysshe Shelley (1792 – 1822): Poets are the unacknowledged legislators of the world.

ledged legislators of the world The chosen themes have a strong con-nection to visual culture in general, particularly the information overload and its thoughtless consumption. With his work in progress DISTANT SUFFERING, Overvliet questions also the role of the viewer and his own role as an artist, as well as the neutrality and security of the art space. By restoring and deconstructing existing media images, Overvliet allows us to view these images from a completely different paradigm.