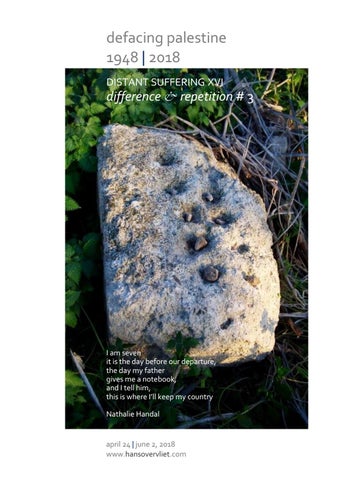 I am seven it is the day before our departure, the day my father gives me a notebook, and I tell him, this is where Iâ&#x20AC;&#x2122;ll keep my country Nathalie Handal

defacing palestine the nakba 1948 | 2018 Hans Overvliet spent 40 days - starting April 24 – charting 417 destroyed Palestinian villages / towns with the name, both in Latin and in Arabic script, the geographical location, the number of inhabitants in 1948 and a photo from the remains of that village / town. He poured that information into 417 obituaries and stored them in a steel archive cabinet. Overvliet also made a video of his computer screen, which shows all the actions that led to each individual obituary. work within the art-series in progress DISTANT SUFFERING XVI [ 2012 - ] part difference & repetition # 3 | april 24 - june 2, 2018 40 days of facing 217 obliterated towns and villages for Maryam [ 12 y. ] from Syria, who was in touch with my work on 09/03/’18 photo cover | ©Abu Raya | 2015

I will go now. Many children, half asleep and stumbling and falling as you hurry them from their houses at the hour of dawn. Houses that will be levelled like accusations in just a moment. A father carries his children and rushes like a missile out of what will shortly be a pile of cement . . . Othman Hussein Excerpt from Camp Block 5 translated by Henry King and Sarah Irving

A Picture of the House in Beit Jala He has to return to shut that window, it isn’t entirely clear whether this is what he must do, things are no longer clear since he has lost them, and it seems a hole somewhere within him has opened up Closing up the cracks has exhausted him mending the fences wiping the glass cleaning the edges and watching the dust that seems, since he has lost the things, to lure his memories into hoax and ruse. And from here his childhood appears as if it were a trick! inspecting the doors has fully exhausted him the window latches the condition of the plants and wiping the dust that has not ceased flowing into the rooms, on the beds, sheets, pots and on the picture frames on the walls Since he has lost them he stays with friends who become fewer sleeps in their beds that become narrower while the dust gnaws at his memories “there” …he must return to shut that window the upper story window which he often forgets at the end of the stairway that leads to the roof Since he has lost them he aimlessly walks and the day’s small purposes are also no longer clear. Ghassan Zaqtan From the collection Like a Straw Bird It Follows Me Translated from Arabic by Fady Joudah

Cross the Sea A girl in Gaza speaks into a table microphone: Do you believe in infinity? If so, what does it look like to you? Not like a wall Not like a soldier with a gun Not like a ruined house bombed out of being Not like concrete wreckage of a school’s good hope a clinic’s best dream In fact not like anything imposed upon you and your family thus far in your precious 13 years. My infinity would be the never ending light you deserve every road opening up in front of you Soberly she nods her head. In our time voices cross the sea easily but sense is still difficult to come by. Next girl’s question: Were you ever shy? Naomi Shihab Nye From the forthcoming collection Voices in the Air

Justification I told you repeatedly: Shiny poetry cannot Inject the war with a needle of reconciliation To the world, poetry is light as a feather. Until dawn I stayed stockpiling the opinion of poetry on papers, But the world does not recognize a status for poetry. When you violated the honor of my name I realized, nevertheless, You begrudged me my civilization. Nasr Jamil Shaath From the collection Because the Hat of Dust is Smoke Translated from Arabic by Samer Al-Saber

Context distant suffering (2013-) is an ongoing series of artwork that investigates the role of the media in the (re)presentation of ( military ) violence and memory. From a thematic perspective distant suffering is about art, violence, war & destruction as presented in media production, media consumption, fading remembrance/memory, the politics of aesthetics, and ownership of the event versus its documentation. The title of distant suffering derives from the book Distant Suffering, Morality, Media and Politics by Luc Boltanski – indeed the brother of. The exhibitions of distant suffering are also about questioning the neutrality & safety of the art space and the role of the art producer & the art consumer, including mine. The transition into art is inspired by the Dutch Artist Armando: It is the beauty of evil, ‘die Schönheit des Bösen’, located in the belly of the evil, looking for a place in the wake of evil in order to show himself to me, although it doesn’t amuse me at all. This beauty calls me to transfer the ‘evil’ into the innocent, because amoral domain the art. june 2018 | Hans Overvliet

Temporal Disruption and Anti-Efficiency: Hans Overvliet’s critical media practice ( excerpt ) Dr. Dani Ploeger The proliferation of digital news media over the past two decades has led to the distribution of more information at ever increasing speeds. Through news feeds, updates on the latest events all over the world are disseminated almost instantly and continuously. In The Administration of Fear (2012), Paul Virilio discusses the paradoxical consequences of this development. Instead of facilitating a more detailed assessment of events and thus trigger empathetic action on the side of the recipient, the fast sequence of detailed mediatizations of catastrophes and threats promotes a permanent state of fear. Whereas, in previous media eras, fear used to be ‘related to localized, identifiable events that were limited to a certain timeframe’, it has now increasingly become an environment that determines everyday life in the Global North. These disruptions of the high-speed digital media landscape that occur during encounters with the finished work are not the only locus of Overvliet’s interventions though. A possibly even more radical interruption of what Virilio calls ‘the cult of speed’ takes place during the creation process. Instead of taking advantage of the latest software solutions to make image processing, graphic design, data collection and categorization faster and easier, Overvliet spends hundreds of hours conducting individual Google searches, and fiddling with the space bar and the return key of his old laptop to position images on a page, in this case, transferring all the information into an analogue obituary. Although to an outsider this may appear like a ‘waste of time’ or a sign of incomepetence, the inefficiency of Overvliet’s engagement with digital technologies is a significant component of his desire to undermine the ideological framework that surrounds digital media. Overvliet’s work process rejects the logic of process optimization and efficiency that usually accompanies everyday consumer technologies. The temporally disruptive quality of his work is also established by the often makeshift digital (and non-digital) processing of its materials. References Paul Virilio (2012). The Administration of Fear. Raj Patel and Jason W. Moore (2017). A History of the World in Seven Cheap Things: A guide to capitalism, nature, and the future of the planet

Julia Mulié | Assistant Curator Vleeshal | Middelburg With the production of the art-series distant suffering, Hans Overvliet questions the role of the media consumer, yet equally his own role as an artist. By constructing these works of existing media images, Overvliet allows us to view these images through an entirely different lens. Most often, the artist’s intended themes include the multiplicity of visual culture and its mindless consumption. Overvliet’s works ask the spectator to gaze intently at them, in order to instigate in the viewer a new awareness of the images around them.

Worry Cocoon For Samih al-Qasim To live with what we are given – Graciously, as if our windows open wide as our neighbors’, as if there weren’t insult at every turn. How did you do that? You sprang from the earth same way everyone does, from the soil of your parents, the small bed and hopeful song. Were pressed along through a century that didn’t honour your people, who washed their faces anyway, stitched the dresses, buttoned shirts. How did you survive so much hurt and remain gracious, finding words to mark the shapes of grief, how did you believe, then and forever, something better could come your people’s way? Naomi Shihab Nye From the forthcoming collection Voices in the Air

Pity the nation divided into fragments, each fragment deeming itself a nation. Kahlil Gibran