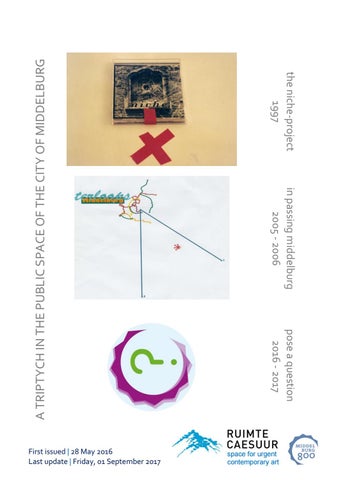 Wat kunst nu doet in musea, de galerieĂŤn of in privĂŠ-collecties, is slechts een duizendste van hetgeen ze vroeger deed in kerken, op pleinen en straten, voor de deugden en ondeugden van de mensen What art now does in museums, galleries or in private collections, is only one-thousandth of what it used to do in churches, in squares and streets, for the virtues and vices of the people. Luciano Fabro Italian plastic sculptor part of the arte povera movement

From the first day ( 1995 ) Willy van Houtum and I started ruimteCAESUUR, we wanted to develop a program in the form of a trip-tych, with the aim to install artwork in the public space in the his-toric centre of Middelburg. Click here for more context [ in English ]. The first part ( 1997 ) was simply donating artworks by 14 visual artists to Middelburg. The second part ( in passingMiddelburg | 2005 – ’06 ) was showing the city how artists partake the city mentally and physically. Thus adding another ‘map’ to the representation of the city. The third part, which is at hand now, is posing the city a number of questions which normally are not enquired. The difference with the previous parts is that we invited people with a variety of intellectual professions: writers, photographers, poets, architects, graphic designers, visual & performance artists, musicians, etc. from Holland, Belgium, Germany, Brazil, Great Britain and Spain. Also a group of students from UCR – Philosophy and Art & Design Track – wants to take part in this third stage; either with the de-sire to make an autonomous proposal or to collaborate with one of the professionals. The projects take place in the public space of Middelburg; the space of CAESUUR functions as a living archive in which the projects are represented. Click here for all individual projects.

‘Pose the question . . . ‘ opened with a video projection on the window of ruimtecAESUUR on the 1st of January 2017 at 00:00:01 by Núria Búfarull|Spain with parts of a highly controversial text by Oscar Wilde | The Preface. Click here for her video. A total of seven exhibitions will support ‘pose the question . . . ‘. The exhibition scheme of the complete program can be found here. Middelburg | 1st publication date: March 2016 | Hans Overvliet

Ever since my first visit to the city of Middelburg the thousands of empty niches caught my eye. Due to the Dutch Iconoclastic Fury which hit Middelburg on August 21 1566, as part of the Calvinistic revolution, most of the (Catholic ) statues were destroyed, leaving Middelburg with hundreds empty niches and at the same time submerged the Low Lands into ‘the word’. I came to the idea to reverse this iconoclastic fury by filling in those niches with art work of fourteen artists. On January 20 1997 – together with Ramon de Nennie – we started the pro-gram in our studio in the M.A.S. The Niche Project, a reversed iconoclastic fury was born. On May 22 1977 we illegally installed the art works at 5 o’clock in the morning. In 1998, the multiple-art magazine catalogus, issue #5 was dedicated to the project.

In 2005 Ramon de Nennie and I invited 16 artists to take part in ‘IN PASSING MIDDELBURG, city scapes & city lines’. The theme was to inform the inhabitants of Middelburg about how artists partake the city mentally and physically. So Machteld van der Wijst designed the every-day-route she took for years by marking the street furniture, Harry Vandevliet gave away his secret route, Ko de Jonge did a mail-artist-project: ‘you have won . . . ‘. The composer Douwe Eisenga made a composition, based on the Groningse folksong ‘a farmer wants to visit his neighbour’, giving music to his daily walks, passing ruimteCAESUUR. Ramon the Nennie painted 14 paintings and attached them on the houses of his nearest friends, thus marking his history with the city, Peter Steutel marked the boundaries of the shopping centre by placing small information signs, stating ‘end of the touristic route’. Caroline Passenier installed hundreds of battens as a long ribbon in the Lange Noordstraat with words that went through her mind, while biking the street on the way to her work. Hans Bommeljé established a communication line between Middelburg and his hometown Vlissingen by means of soup cans and a tiny rope. Philp Veurink gave shape to the route be-tween his formal gallery and Gallery ‘T’ using fragile ceramic leaves. Peter & Jan Hamer, Jan B. Kuipers and Peter Sijnke wrote some short stories and poems. Liesbeth Labeur on inter-net started a conversation with her fellow believers. Barbara Jean mowed patterns in the grass of the Maaisbaai on the spot the museum of Aldo van Eyck was projected, but was never built. Hans Overvliet turned Middelburg into a pedestal, by stic-king 100 names of victims made by the West in the Middle East on her curb stones. The results of the program were printed on large canvases, displayed in ruimteCAESUUr. On September 3, 2006 these canvasses were shown in the public space at the Vismarkt during the presentation of the catalogue with the complete works. The following pages give you a broad selection of this part.

Like every city, Middelburg has its cityscapes and city lines and their representations. Overground by means of the city map with its extensive street patterns, its canals, its walking trails with or without specific themes, its public transport plan, etc. Hidden in the underground you’ll find its watercourses, its buried historical treasures from the past, its maps of the invisible infrastructure like electricity cables, gas pipes, sewer system, internet, ect. Above these two systems the representations take shape in weather maps, no-fly zones, air pollution statistics, etc. In a virtual way Middelburg is represented by the history of the actions of its inhabitants, their stories and pictures, preserved in its archives and the internet, in the memory of its visitors, etc. In 2015 16 artists added their own ‘map’ to all these existing maps. The catalogue functions as the repository of their ideas, interventions and actions. artist map ‘IN PASSING MIDDELBURG’

Text that accompanied the presentation of the catalogue ‘IN PASSING MIDDELBURG, city scapes & city lines’

Some words to ‘pose a question’ I feel a bit restrained in writing too much about my ideas about this stage as I wrote on the opening page. So, to serve this principal, perhaps it is in order to give away some of my sources that inspired me to come up with this idea and the time frame I wanted to execute the last stage. To begin with the latter: in 2017 Middelburg celebrates its 800th ‘birthday’. It seems a good idea to, instead of only looking back, to get into a conversation with ‘the city’, thus linking the past with the present and possibly the future. Of course depending on the questions the participants ask and the answers they get. As far as my inspiration goes: some years ago Machteld van der Wijst in Vlissingen hang a number of signs in the public space of Vlissingen with questions like ‘ARE YOU BEING LOVED?’ or do you want me to ask that? I guess that you understand that this wonderful, poetic and vulnerable work doesn’t need any more words from my side. Also Candy Chang is a great source of inspiration. By means of objects in the public space she invites people to think about their secrets, their wishes and thoughts and subsequently she challenges people by means of ‘a question’ to share their secrets, their wishes, etc. with the rest of the world. After working in f.i. Nairobi, New Orleans, Johannesburg, Vancouver, New York, she came to the conclusion that – in spite of the technical progress – many people find it hard to get in contact with their neighbours and other residents. The key question for her and us: can artists and affiliated

professionals, starting from their autonomous position acquire a legitimated position in the debate and the concrete shaping of the public space. Both with artworks, ideas and/or concepts. And attached to that: how to plan and shape the public space, in order to give it functions fit for a place for dialog, exchange of knowledge and encounter? I Wish This Was is a participatory public art project that explores the process of civic engagement. Inspired by the limited dynamics of community meetings where the loudest people ruled, as well as the volume of abandoned buildings, Chang posted thousands of “I wish this was ___” stickers on vacant buildings across New Orleans to invite residents to easily share their hopes for these spaces. The project allows residents to provide civic input on-site and enables introverts like Chang to share just as much with their community. Infusing street art, urban planning, and ethnographic research, the project reveals the hopes, dreams and colourful imaginations across different neighbourhoods, challenges barriers to participation, and provokes new insights for what ‘the city’ might yet become.

before you use any of the images or texts, please contact caesuur@zeelandnet.nl beforehand

Where are my sisters? | work in progress | 2016 – 2017 ©Elis Vermeulen Questioning the eroded partnerships between Middelburg and her so called sister cities Nagasaki, Folkestone, Vilvoorde & Glogow Elderberry plants to be planted in winter 2017 in the public space of Middelburg text and pictures in the archive of ‘pose the question’ | spaceCAESUUR