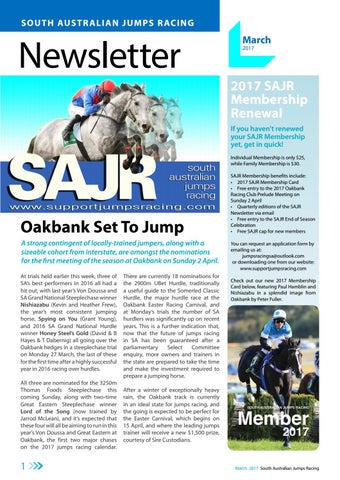 Oakbank Set To Jump A strong contingent of locally-trained jumpers, along with a sizeable cohort from interstate, are amongst the nominations for the first meeting of the season at Oakbank on Sunday 2 April. At trials held earlier this week, three of SA’s best performers in 2016 all had a hit out, with last year’s Von Doussa and SA Grand National Steeplechase winner Nishiazabu (Kevin and Heather Frew), the year’s most consistent jumping horse, Spying on You (Grant Young), and 2016 SA Grand National Hurdle winner Honey Steel’s Gold (David & B Hayes & T Dabernig) all going over the Oakbank hedges in a steeplechase trial on Monday 27 March, the last of these for the first time after a highly successful year in 2016 racing over hurdles. All three are nominated for the 3250m Thomas Foods Steeplechase this coming Sunday, along with two-time Great Eastern Steeplechase winner Lord of the Song (now trained by Jarrod McLean), and it’s expected that these four will all be aiming to run in this year’s Von Doussa and Great Eastern at Oakbank, the first two major chases on the 2017 jumps racing calendar.

There are currently 18 nominations for the 2900m UBet Hurdle, traditionally a useful guide to the Somerled Classic Hurdle, the major hurdle race at the Oakbank Easter Racing Carnival, and at Monday’s trials the number of SA hurdlers was significantly up on recent years. This is a further indication that, now that the future of jumps racing in SA has been guaranteed after a parliamentary Select Committee enquiry, more owners and trainers in the state are prepared to take the time and make the investment required to prepare a jumping horse.

SAJR Membership benefits include: • 2017 SAJR Membership Card • Free entry to the 2017 Oakbank Racing Club Prelude Meeting on Sunday 2 April • Quarterly editions of the SAJR Newsletter via email • Free entry to the SAJR End of Season Celebration • Free SAJR cap for new members You can request an application form by emailing us at: jumpsracingsa@outlook.com or downloading one from our website: www.supportjumpsracing.com Check out our new 2017 Membership Card below, featuring Paul Hamblin and Nishiazabu in a splendid image from Oakbank by Peter Fuller.

After a winter of exceptionally heavy rain, the Oakbank track is currently in an ideal state for jumps racing, and the going is expected to be perfect for the Easter Carnival, which begins on 15 April, and where the leading jumps trainer will receive a new $1,500 prize, courtesy of Sire Custodians.

Bob Champion to be special guest at Oakbank Carnival Legendary jumps jockey and international charity fundraiser Bob Champion will be at the 2017 Oakbank Easter Racing Carnival Anyone who has even a passing acquaintance with the history of the Grand National at Aintree and National Hunt racing will be aware of the story of Bob Champion. Known around the world for his win in the famous race on Aldaniti in 1981 after being diagnosed with cancer and being given only months to live, Bobâ&#x20AC;&#x2122;s inspiring story was retold in the film Champions, starring John Hurt. The Bob Champion Cancer Trust

has subsequently raised tens of millions of dollars for cancer charities worldwide. Bob, who will be appearing at the Carnival courtesy of UBet, will also be the special guest at a lunch at The Haus in Hahndorf on Sunday 16 April, followed by the traditional Oakbank Calcutta. A proportion of the proceeds from both events will go to the Cancer Council of South Australia. Tickets to the lunch are on sale at www.oakbankeastercarnival.com.au.

SAJR STUBBY HOLDERS $10 Enjoy icy-cold beer while proudly displaying your support for SAJR! SAJR MUGS $10 A cup of tea or coffee need not be a mundane experience! Be the envy of the neighbours with a SAJR mug. SAJR CAPS $15 Show your support for jumps racing wherever you go in this smart cap!

Bob Champion and the man who played him on film, the late John Hurt

2017 Sire Custodians Leading Jumps Trainer Prize Sire Custodians, the leading supplier of syndicate documentation and management consultancy services to the Australian thoroughbred industry, will be awarding a prize to the leading jumps trainer over the two days of the Easter Racing Carnival at Oakbank.

second and third places. If there is a tie remaining after this process, the prize will be shared. The 2017 Sire Custodians Leading Jumps Trainer Prize will be awarded after the connections of the Great Eastern Steeplechase winner receive their trophy, and will be presented by Tony and Linda Fleiter of Sire Custodians, proud sponsors of jumps racing at Oakbank.

Jericho Comes to Oakbank The story of Bill The Bastard and The Jericho Cup is one of the great stories in Australian military history, yet one that is not widely known. Oakbank is proud to be playing its part in celebrating its centenary.

The main race was called The Jericho Cup, and was run over 3 miles through the desert sands. The winner was Bill the Bastard, probably Australiaâ&#x20AC;&#x2122;s Greatest War Horse.

points. The final field of 16 will be determined according to total points accrued. Two races at the Oakbank Easter Carnival will be qualifying events â&#x20AC;&#x201D; the 3600m Handicap and the 4,950m Great Eastern Steeplechase (one of only two exemptions to the flat race only rule. the other being the 5,500m Grand Annual Steeplechase at Warrnambool). An exception to the 3,000m minimum race distance will be the Spring Stayers Series Final run over 2,600m at Morphettville in November.

The Jericho Cup will be re-run annually from the 100th anniversary in 2018, to honour Bill the Bastard, the Australian Light Horsemen and their magnificent mounts â&#x20AC;&#x201C; The Walers 1914 to 1918.

Throughout 2017, the first three Australasian-bred horses over the line in every 3,000m or further flat race will earn 3-2-1

Keep up to date with the qualifying for The Jericho Cup at www. thejerichocup.com.au

Approaching the end of the First World War, the Australian Light Horse were planning a major offensive against the Turkish Empire. In order to lull the enemy into believing nothing unusual was afoot, a race meeting was organised on the eve of the assault.

CONTACT US SUPPORTING AND PROMOTING JUMPS RACING IN SOUTH AUSTRALIA

SAJR, in association with the South Australian racing clubs who hold jumps races, will be presenting a smart new jacket to winning connections at a number of jumps race meetings throughout the state throughout the year.

Featuring the SAJR logo, these stylish yet practical jackets are set to become the must-have accessory for the 2017 racing season. The lucky recipients will not only look good, but theyâ&#x20AC;&#x2122;ll be showing their support for jumps racing wherever they go! March 2017 South Australian Jumps Racing 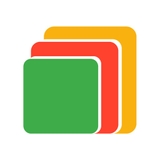 A4 newsletter designed for SAJR by Cadogan and Hall in Adelaide. Created in InDesign and suitable for print, digital marketing, and social m...

A4 newsletter designed for SAJR by Cadogan and Hall in Adelaide. Created in InDesign and suitable for print, digital marketing, and social m...