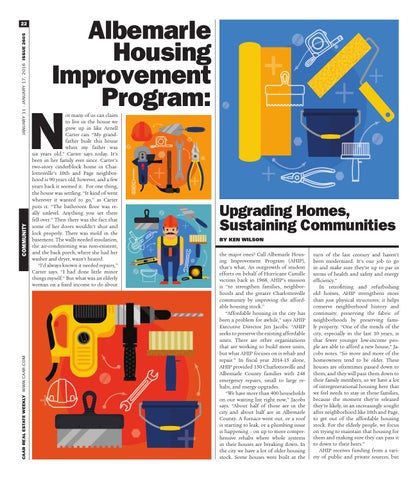 ot many of us can claim to live in the house we grew up in like Arnell Carter can. “My grandfather built this house when my father was six years old,” Carter says today. It’s been in her family ever since. Carter’s two-story cinderblock home in Charlottesville’s 10th and Page neighborhood is 90 years old, however, and a few years back it seemed it. For one thing, the house was settling. “It kind of went wherever it wanted to go,” as Carter puts it. “The bathroom floor was really unlevel. Anything you set there fell over.” Then there was the fact that some of her doors wouldn’t shut and lock properly. There was mold in the basement. The walls needed insulation, the air-conditioning was non-existent, and the back porch, where she had her washer and dryer, wasn’t heated. “I’d always known it needed repairs,” Carter says. “I had done little minor things myself.“ But what was an elderly woman on a fixed income to do about

the major ones? Call Albemarle Housing Improvement Program (AHIP), that’s what. An outgrowth of student efforts on behalf of Hurricane Camille victims back in 1968, AHIP’s mission is “to strengthen families, neighborhoods and the greater Charlottesville community by improving the affordable housing stock.” “Affordable housing in the city has been a problem for awhile,” says AHIP Executive Director Jen Jacobs. “AHIP seeks to preserve the existing affordable units. There are other organizations that are working to build more units, but what AHIP focuses on is rehab and repair.” In fiscal year 2014-15 alone, AHIP provided 130 Charlottesville and Albemarle County families with 246 emergency repairs, small to large rehabs, and energy upgrades. “We have more than 400 households on our waiting list right now,” Jacobs says. “About half of those are in the city and about half are in Albemarle County. A furnace went out, or a roof is starting to leak, or a plumbing issue is happening – on up to more comprehensive rehabs where whole systems in their houses are breaking down. In the city we have a lot of older housing stock. Some houses were built at the

turn of the last century and haven’t been modernized. It’s our job to go in and make sure they’re up to par in terms of health and safety and energy efficiency.” In retrofitting and refurbishing old homes, AHIP strengthens more than just physical structures; it helps conserve neighborhood history and continuity, preserving the fabric of neighborhoods by preserving family property. “One of the trends of the city, especially in the last 10 years, is that fewer younger low-income people are able to afford a new house,” Jacobs notes. “So more and more of the homeowners tend to be older. These houses are oftentimes passed down to them, and they will pass them down to their family members, so we have a lot of intergenerational housing here that we feel needs to stay in those families, because the moment they’re released they’re likely, in an increasingly sought after neighborhood like 10th and Page, to get out of the affordable housing stock. For the elderly people, we focus on trying to maintain that housing for them and making sure they can pass it to down to their heirs.” AHIP receives funding from a variety of public and private sources, but 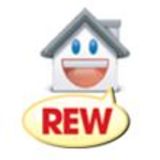 More from The Real Estate Weekly