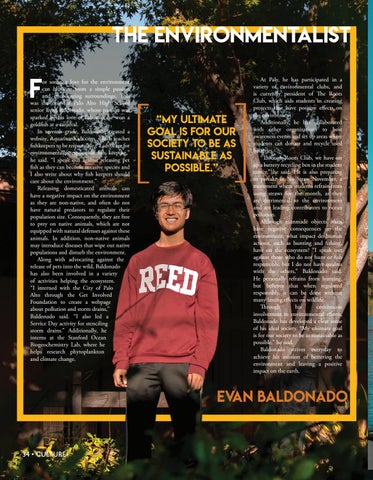 or some, a love for the environment can blossom from a simple passion and encouraging surroundings. This was the case for Palo Alto High School senior Evan Baldonado, whose passion was sparked by his love of fish after he won a goldfish at a carnival. In seventh grade, Baldonado created a website, AquariumKids.com, which teaches fishkeepers to be responsible. “I advocate for environmentally-responsible fish keeping,” he said. “I speak out against releasing pet fish as they can become invasive species and I also write about why fish keepers should care about the environment.” Releasing domesticated animals can have a negative impact on the environment as they are non-native, and often do not have natural predators to regulate their population size. Consequently, they are free to prey on native animals, which are not equipped with natural defenses against these animals. In addition, non-native animals may introduce diseases that wipe out native populations and disturb the environment. Along with advocating against the release of pets into the wild, Baldonado has also been involved in a variety of activities helping the ecosystem. “I interned with the City of Palo Alto through the Get Involved Foundation to create a webpage about pollution and storm drains,” Baldonado said. “I also led a Service Day activity for stenciling storm drains.” Additionally, he interns at the Stanford Ocean Biogeochemistry Lab, where he helps research phytoplankton and climate change.

“My ultimate goal is for our society to be as sustainable as possible.”

At Paly, he has participated in a variety of environmental clubs, and is currently president of The Roots Club, which aids students in creating projects that have positive effects on the environment. Additionally, he has collaborated with other organizations to host awareness events and set up areas where students can donate and recycle used batteries. “Through Roots Club, we have set up a battery recycling box in the student center,” he said. He is also preparing to partake in No Straw November, a movement where students refrain from using straws for the month, as they are detrimental to the environment and are leading contributors to ocean pollution. Although manmade objects often have negative consequences on the environment, what impact do human actions, such as hunting and fishing, have on the ecosystem? “I speak out against those who do not hunt or fish responsibly, but I do not have qualms with the others,” Baldonado said. He personally refrains from hunting, but believes that when regulated responsibly, it can be done without many lasting effects on wildlife. Through his continuous involvement in environmental efforts, Baldonado has developed a clear sense of his ideal society. “My ultimate goal is for our society to be as sustainable as possible.” he said. Baldonado strives everyday to achieve his mission of bettering the environment and leaving a positive impact on the earth. 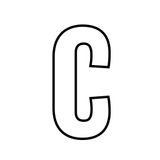