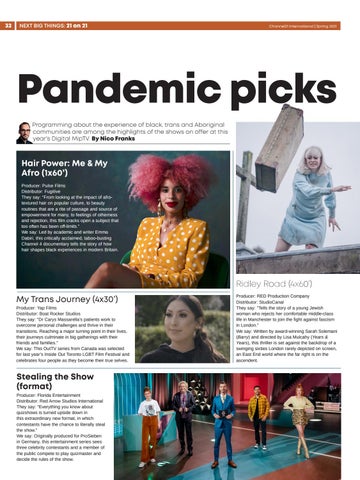 Pandemic picks Programming about the experience of black, trans and Aboriginal communities are among the highlights of the shows on offer at this year’s Digital MipTV. By Nico Franks

Hair Power: Me &amp; My Afro (1x60’) Producer: Pulse Films Distributor: Fugitive They say: “From looking at the impact of afrotextured hair on popular culture, to beauty routines that are a rite of passage and source of empowerment for many, to feelings of otherness and rejection, this film cracks open a subject that too often has been off-limits.” We say: Led by academic and writer Emma Dabiri, this critically acclaimed, taboo-busting Channel 4 documentary tells the story of how hair shapes black experiences in modern Britain.

Ridley Road (4x60’) My Trans Journey (4x30’) Producer: Yap Films Distributor: Boat Rocker Studios They say: “Dr Carys Massarella’s patients work to overcome personal challenges and thrive in their transitions. Reaching a major turning point in their lives, their journeys culminate in big gatherings with their friends and families.” We say: This OutTV series from Canada was selected for last year’s Inside Out Toronto LGBT Film Festival and celebrates four people as they become their true selves.

Stealing the Show (format) Producer: Florida Entertainment Distributor: Red Arrow Studios International They say: “Everything you know about quizshows is turned upside down in this extraordinary new format, in which contestants have the chance to literally steal the show.” We say: Originally produced for ProSieben in Germany, this entertainment series sees three celebrity contestants and a member of the public compete to play quizmaster and decide the rules of the show.

Producer: RED Production Company Distributor: StudioCanal They say: “Tells the story of a young Jewish woman who rejects her comfortable middle-class life in Manchester to join the fight against fascism in London.” We say: Written by award-winning Sarah Solemani (Barry) and directed by Lisa Mulcahy (Years &amp; Years), this thriller is set against the backdrop of a swinging sixties London rarely depicted on screen, an East End world where the far right is on the ascendent. 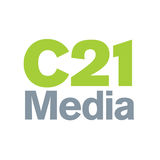